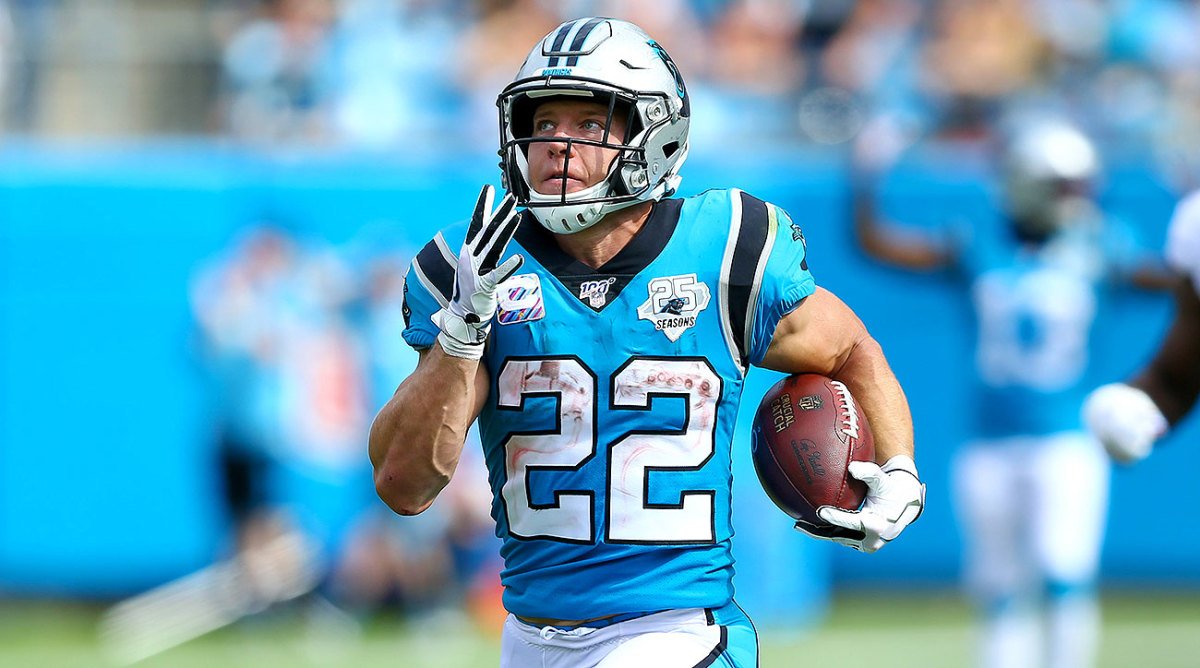 The top 24 scoring RB’s in 2019 contains a lot of the names that you would expect, (in this article we will look at 1-12) but how did they get there? We take a look at how they performed, and their outlook for 2020.

What a Season. Christian McCaffrey was a huge cheat code for fantasy last season, essentially performing as two players in one. McCaffrey dominated RB scoring, finishing well ahead of the chasing pack- making him easily the fantasy MVP.

2020 Outlook: Unless there are wholesale changes made on offense with the new coaches in place (and likely a new QB) this offense is still running through McCaffrey. At this point, he seems like the obvious 1.01 pick.

Jones was a frustrating player to own last season, despite his finish as the RB2 this season. The Green Bay Packers back had some games where he just disappeared completely, but when he did perform he won you your week.

2020 Outlook: Jones was definitely entrusted with the reigns of the offense last season, but likely will suffer some level of touchdown regression next season. However, he was entrusted in the passing game far more than in previous seasons- which should help mitigate that.

Henry took the reigns of the offense in 2019, at times literally carrying the opposition defenders on his back. Surprisingly, given his lack of involvement in the passing game, Henry was a consistent scorer last season.

2020 Outlook: Henry will be surrounded by the same players next season, with the Titans re-signing Ryan Tannehill and tagging Henry. However, the offensive line has been shaken up with the loss of OT Jack Conklin. As Henry is not involved in the passing game, he won’t be in the discussion as a leading RB, but will still be worth a late first-round pick.

Zeke‘s season was a bit of a strange one. He was consistent and performed well in the season, but somehow owners would have hoped for more. Zeke was given more red-zone rushing attempts but was unable to make the big plays he has in previous seasons.

2020 Outlook: Zeke is still a quality RB, and was still heavily involved in what Dallas did on offense. With the expectation that the key pieces will remain the same next season, Zeke should again be a top tier RB.

Cook was a great fantasy option for the majority of the year and was on pace to finish as the RB2 this season. However, yet again he was unable to play a full season, this time missing the final three weeks of the season. Cook still had the 3rd most goal-line carries, despite missing two games- highlighting his importance to the Vikings offense.

2020 Outlook: Cook is entering his contract year, and will be looking to make a big impression so that he is able to get the pay-day that he wants. Health is a concern, but equally, as the duo of Alexander Mattison and Mike Boone impressed in his stead Cook may find himself rested for more plays than he is used to.

If you were one of the owners that picked up Ekeler due to Melvin Gordon holding out at the start of the season- congratulations. Ekeler was used often in a variety of ways, but mainly as a backfield and slot receiver, something that is likely to be the same going into next season.

2020 Outlook: Ekeler‘s outlook is muddied with the uncertainty the team has at QB. Currently (before the draft) it looks like Tyrod Taylor will be at the helm, which likely means fewer dump-offs to Ekeler. Either way, he is a talented back with a good floor in PPR leagues.

Chubb started the season strongly as one of the only bright sparks on the Cleveland offense. He led the league in the number of games with over 100 rushing yards (7), and big yard runs. However, in the second half of the season, after Kareem Hunt returned from suspension, he dropped off from his hot start.

2020 Outlook: Cleveland has brought in a new HC in Kevin Stefanski, who has shown a tendency to run the ball. The team has also decided to bring back Hunt for next season. Depending on the involvement of Hunt, Chubb could be a top 12 pick or slip into the middle rounds.

Ingram scored 15 TDs in one of the most effective offenses in the league. Surprisingly, scoring more receiving touchdowns than nearly ever other running back (including Christian McCaffrey). That is despite only catching 26 passes in the season.

2020 Outlook: Ingram is likely to be undervalued again in drafts next season, but there is likely going to be TD regression given the lack of touches he has had compared to those around him. A great zero-RB option or flex play for those that have gone RB heavy in the draft.

Fournette‘s finish is impressive, especially as he has only scored three touchdowns all season. A big part of that is due to his complete re-invention as a pass-catcher, where he caught more passes than he did in his past three seasons (including his final year in college).

2020 Outlook: The Jaguars RB is a prime candidate for positive TD regression next season if he continues to get the same workload. Given his troubles with the team, they may opt to bring in a free agent or add a player in the draft for their backfield.

Carson certainly established himself as the lead running back in Seattle last season. Carson had previously only been effective on the ground but showed some improvement in the passing game. That led to an average of 21 touches per game. That is a great usage level for fantasy owners, allowing him to overcome the struggles Seattle has had along their offensive line.

2020 Outlook: Carson has fantasy value due to the workload that he is given, which could be eaten into by Rashaad Penny‘s return from a major injury suffered last season. Along with that, Carson‘s historical fumbling issues could become an issue if his workload is reduced.

Barkley had a phenomenal rookie season, leading to being drafted as the 1.01 in many drafts last season. However, he struggled to live up those performances, he did suffer an injury in Week 4 which led to him missing time and clearly affect him going forward.

2020 Outlook: Barkley is the most talented player on the Giants roster, and one of the most effective players in the league. However, his value is tied to his involvement in the passing game, which could change with Daniel Jones the new starter for the team. Despite that, he is still in the conversation as a top pick in the draft next year.

Kamara didn’t have the big games that he has had in previous seasons. However, despite that, he was still one of the most effective running backs last season. The real regression for Kamara came in the red-zone where the team looked to Latavius Murray.

2020 Outlook: Kamara suffered an injury last season, which forced him to miss time. Furthermore, the Saints were forced to operate without Drew Brees. Kamara is likely to be available at a discount for drafts next season, but with Brees back at the helm, he is still an elite RB.

Check back for the next installment of the season review series where we look at the other RB’s who finished in the top 24 at the position.