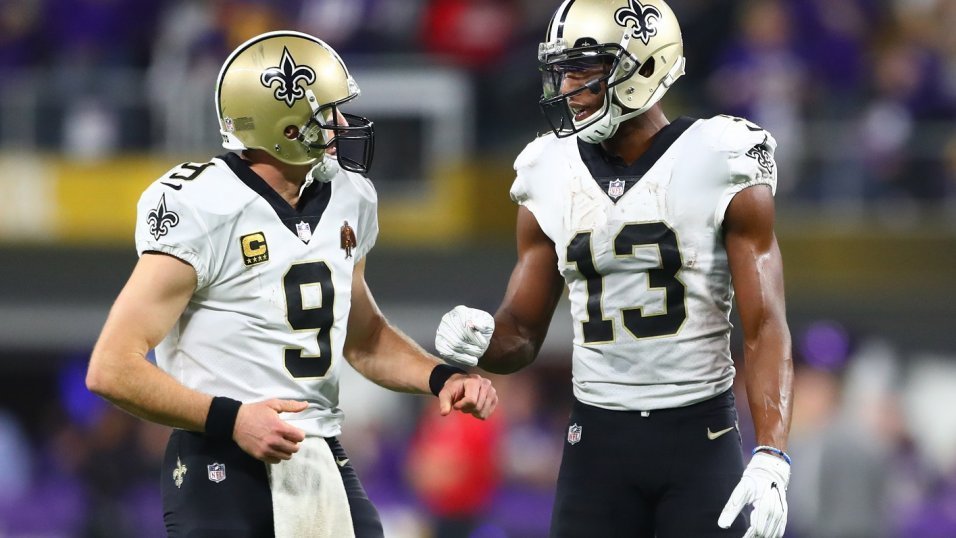 Thanksgiving Selections, I’m not talking about turkey or sides I’m talking DraftKings! Week 13 is a bit of an odd one, with a larger slate of games on Thursday, due to Thanksgiving. With a three-game slate it’s a case of getting in some of the must-plays and looking for value elsewhere to slot them in. So let’s get into them!

Pair Thanksgiving dinner with a side of TDs! Play FREE for $50,000 in total prizes. Win or lose, new users take home $10 in free play credit, thanks to our partnership with DraftKings. Enter now, offer ends 11/28 at 12:30pm ET. T&Cs apply. https://dkng.co/kfstxg

Drew Brees ($6,800) is the obvious selection at the position this week. Every other quarterback has a difficult matchup, and this game is expected to be the highest scoring. Brees travels to Atlanta who have been more effective on defense in recent weeks, but even so, the ability of the veteran should allow for a big game.

Matt Ryan ($6,400) is the other quarterback that I would consider playing in the slate, as even though New Orleans has been an effective defense, Atlanta are likely to need to throw the ball in this matchup. Ryan is likely to see lower ownership this week, after his struggles against Tampa Bay

Running back options are limited this week, with the big players meaning you are limited at the receiver position. That has forced me to look at the next tier of players at the position this week.

David Montgomery ($5,400) has disappointed a lot of season-long fantasy owners, but that shouldn’t put you off selecting him for this week. Montgomery is the lead back in Chicago, facing a Detroit team that have given up an average of 30.7 points to the position. This is a great price for a back with a huge amount of upside & allows us to do some great things elsewhere.

Devin Singletary ($5,800) has been impressive in his rookie season, as a dynamic change of pace from the veteran Frank Gore. Buffalo is expected to be trailing in this game, which should give the opportunity to Singletary to be involved in the passing game this week.

Frank Gore ($3,900) is my final consideration at running back. Now stay with me. The price means you are needing low double digits to meet value, which could be a struggle against Dallas who could force Buffalo into throwing the ball. That being said, this price allows you to go and grab both of the blockbuster receivers on the slate this week.

Thanks for staying with me through the running backs. Sorry about what we had to do there, but making those selections should allow us to grab some elite talent at the receiver position

Michael Thomas ($9,100) is the most expensive player on the slate this week, with good reason. New Orleans passing attack is back to it’s best with the return of Brees, and Thomas is the best receiver in the league right now. Thomas has a high floor, scoring at least 16 DK points in every game this season, and has a limitless ceiling against Atlanta.

Randall Cobb ($5,000) might not be the first name that you think of when you think of the passing offense in Dallas, I understand that. But in his last three games he has caught 14 passes for 307 yards and two touchdowns. That production can’t be sniffed at- Buffalo are likely to have to deal with the downfield threats of Amari Cooper and Michael Gallup, meaning Cobb should be able to rack up plenty of receptions.

Cole Beasley ($4,700) has found himself into the vast majority of my lineups, due to his price and floor. Beasley returns to face Dallas if you want to buy into the revenge game narrative. If you don’t then his last outing against Denver where he was able to catch six passes for 76 yards and a touchdown should give you an idea of the production that he can hit in his role.

Now the next selections depend on if you went full Gore at running back.

If you did, then congratulations you can add Julio Jones ($7,300) to your lineup this week. Atlanta are expected to be trailing in this game and will be looking to move through the ball through the air. Jones is the lead receiver and while that will attract primary coverage- if anyone can overcome it Jones can. Jones hasn’t had one of those typical boom games for a while, what better time than the holidays!?

If you didn’t, then it’s Calvin Ridley ($6,600) who is the second receiving option for Atlanta. We know what Ridley can do if he is allowed the space to operate. Mixing in a combination of the Ridley and Jones is the way forward this week.

Jared Cook ($4,800) is in the top tier of talent at the position this week. That should really tell you everything you need to know! Looking elsewhere allows you to save salary to spend elsewhere, but Cook has failed to score less than 11 points since the opening four weeks of the season.

Dawson Knox ($2,900) is the tight end in my lineup if I don’t select Cook. Primarily as I think he is the cut off at the position while giving the maximum saving to use elsewhere. Dallas have given up an average of 13.9 points to the position this season, and Knox is the lead tight end for Buffalo

Note: In selecting Knox you are then able to upgrade Beasley with Ridley at receiver.

Chicago ($2,500) are the play this week, and really are the only option at the position, given the price. Chicago were the unit that I wanted before looking at the prices- and are in the bottom half of the options (in relation to cost). Chicago have been struggling this season, but now face Detroit who are without Matthew Stafford and Kerryon Johnson. Slot them in and move on.

Pair Thanksgiving dinner with a side of TDs! Play FREE for $50,000 in total prizes. Win or lose, new users take home $10 in free play credit, thanks to our partnership with DraftKings. Enter now, offer ends 11/28 at 12:30pm ET. T&Cs apply. https://dkng.co/kfstxg