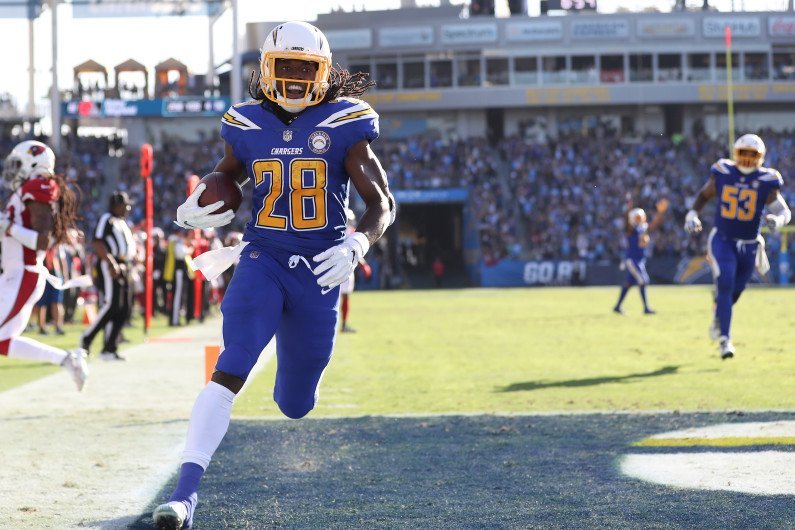 It’s weeks like this that I’m thankful for DraftKings. While I’m still alive in the playoffs in some leagues, I’m out of the hunt in others. So let’s jump into some selections for Week 14!

Kirk Cousins ($6,700) certainly struggled at the start of the season, with the team fully relying on it’s running game to get the ball moving, but has been able to string a number of performances together. With a matchup at home against Detroit allows for a good option for owners this week.

Ryan Tannehill ($5,800) continues to be my cheaper option at the position. Tannehill has been a great option for Tennessee since he took the starting job. In a matchup against Oakland who has been effective against the run, the team may be forced to entrust their quarterback to move the ball instead of their wrecking ball running game.

Melvin Gordon ($6,400) is one of my favored picks at the position this week, due to the matchup. Jacksonville aren’t the defense that they have been in recent seasons on defense and are actually a team to target for running backs. Gordon is involved on the ground and air, making him game-script proof- get him in your lineup as your cornerstone for the position.

Devonta Freeman ($5,400) feels almost like a trap play this week against a team that made Adrian Peterson and Derrius Guice look like elite running backs. Any concerns on Atlanta limiting his involvement were put to bed last week, where he was given a healthy workload. At the price, this feels too good to pass up.

Phillip Lindsay ($5,300) is another of the cheaper options at running back this week. While he doesn’t see the field that often when he is on the field he is the one that gets the ball. Houston just allowed Jason White to run all over them, and with Lindsay operating in a similar role, expect a good outing from the running back this week

Stefon Diggs ($7,600) has excelled with Adam Thielen out of the lineup, although he struggled in his last outing. Detroit are a team that has struggled to stop receivers this season. And focusing on last week, he was still given the opportunity to impress with nine targets in the game. A great stack option for owners this week with Kirk Cousins.

Christian Kirk ($5,200) is a guy that has a tough matchup, and a quarterback who looks like the hits are starting to take a toll. However, he is the alpha attacking weapon in the offense. At the price, he offers a decent floor and if he manages to recapture some of the magic of his performance of a few weeks ago, he could be a great addition.

Curtis Samuel ($4,900) is a great option for fantasy owners looking to save some cash for elsewhere in their lineup. Carolina faces an Atlanta defense, who while they are much improved in recent weeks, have struggled to defend the wide receiver position this season. Samuel has been given six or more targets in nearly all of his games this season if he is able to break a tackle or two he has the ability to score big.

Mike Williams ($4,500) or Mr. The Touchdowns Are Coming is a good option this week, even though he matches up against Jacksonville. Williams was a touchdown monster last season but has struggled to score this season. Simply, I think there has to be positive regression in that column, and this is a great week to add him as an upside play.

Jack Doyle ($4,600) was featured last week, with Eric Ebron missing through injury. Indianapolis has truly been hit with the injury bug recently, and someone has to catch the ball! Last week Doyle had 11 targets and against Tampa Bay who has struggled to limit tight end production, this is another slam dunk pick.

Vance McDonald ($4,300) if you can’t quite afford Doyle who is my preferred pick at the position, look no further than McDonald. He is the next tight end on the Arizona train, and even in a struggling offense has touchdown upside

Green Bay ($4,000) are the most expensive option on the slate, with a matchup at home against Washington. Dwayne Haskins has struggled in recent weeks against some mediocre defensive units, against a Green Bay unit who will be bringing the fire? We could be looking at multiple turnovers this week.

Baltimore ($2,900) are my cheaper option this week. Baltimore have been a great defense this season, and while Buffalo has looked impressive they weren’t doing it against a unit of this ability. With the running game looking to drain the clock, the unit are a great (cheap) option this week.