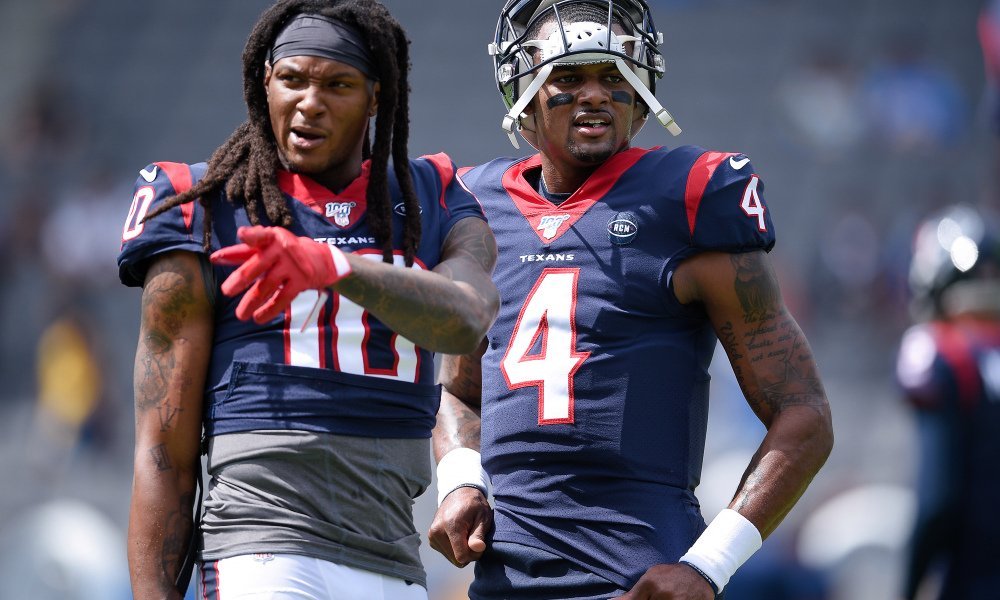 We enter the season of festive cheer, meaning two slates of action this week on DraftKings. Being from the UK, it’s not often we get to stay up late to enjoy the action without the threat of a tired day at work. So sit back, set a lineup or two and catch the action. Let’s jump into some selections for the Week 16 Saturday slate!

Deshaun Watson ($7,000) is the premier quarterback on the slate this week, and forms a highly effective (albeit) expensive stack with DeAndre Hopkins. Tampa Bay have struggled to limit receivers this season, which should give Watson plenty of opportunity to utilize his offensive talents through the air.

Jimmy Garroppolo ($5,500) offers another option at quarterback, albeit in a tougher match up. Los Angeles have given up an average of 17.5 points to the position this season, which would be right around the value required for the salary spend. In a home divisional matchup, Garroppolo will be looking to impose himself on the game.

Todd Gurley ($6,300) has been getting more heavily involved in the offense as the end of the season has approached. Gurley has scored four touchdowns in his last three games, with 194 rushing yards and 72 receiving yards. Yes this isn’t the fantasy force of last season, but at the price on the slate he is a good option.

Raheem Mostert ($6,100) has firmly established himself as the hot-hand for San Francisco scoring five touchdowns in the past four weeks. San Francisco‘s offense relies upon establishing the run, and Mostert is likely to continue to get the lions share of that work

James White ($5,800) has molded his own position in the New England offense, as a hybrid running back and receiver. White has found himself heavily involved in the offense as a dump off for quarterback Tom Brady, as well as being used in the rotation in the backfield.

DeAndre Hopkins ($8,500) will be licking his lips at getting out on the field to face Tampa Bay this week, with their struggles in the secondary. Hopkins is one of the most elite receivers in the league and should likely be involved heavily in the game. Especially due to the effectiveness Tampa have displayed in choking teams on the ground.

Will Fuller ($5,900) offers a cheaper option that offers a similar exposure to the Houston passing offense. While not as consistently used as DeAndre Hopkins, Fuller is a dangerous deep threat that is likely to get the opportunity to carve up a secondary that has struggled this season.

Emmanuel Sanders ($5,500) has rolled back the years since his trade to the Bay this season. While George Kittle is likely considered to be the lead receiver for the team, Sanders still has enough opportunity to be fantasy relevant.

N’Keal Harry ($4,000) has been hugely touchdown dependent for fantasy in his rookie season. However, New England are going to be forced to look elsewhere with Julian Edelman likely to receive tight coverage and the running game having to contend with a stout defensive line.

George Kittle ($6,500) has become one of the premier receivers in the league. He might be listed as tight end, but his involvement is more akin to a lead receiver. Los Angeles have to try to contain the running game of San Francisco primarily, which should allow Kittle the space to thrive.

O.J. Howard ($4,000) is a great tight end option this week with the recent injury bug that has hit Tampa Bay. Mike Evans has now been put onto the injured reserve, and Chris Godwin (as of writing) is trending towards missing the game on Saturday. Howard is familiar with the offense, and has been more involved in recent weeks.

Cameron Brate ($3,500) is worth consideration too with the shortage of receiving options for Tampa Bay this week. Brate might be a touchdown dependent option this week, but the price factors that in and he is the cheapest (viable) option on the slate.

New England ($4,000) returned to their dominant early-season form last week against Cincinnati, and looked dominant doing it. When New England faced Buffalo in Week 4 they had five sacks, four interceptions and scored a touchdown. Buffalo were still finding their feet, but with New England at home, we could have another repeat performance.

San Francisco ($3,400) have been one of the most improved units in the league, after struggling last season. Equally Los Angeles have regressed on offense recently. Sure, Los Angeles have the ability to score, but equally they have found themselves crumbling under pressure this season with sacks given up and turnovers.