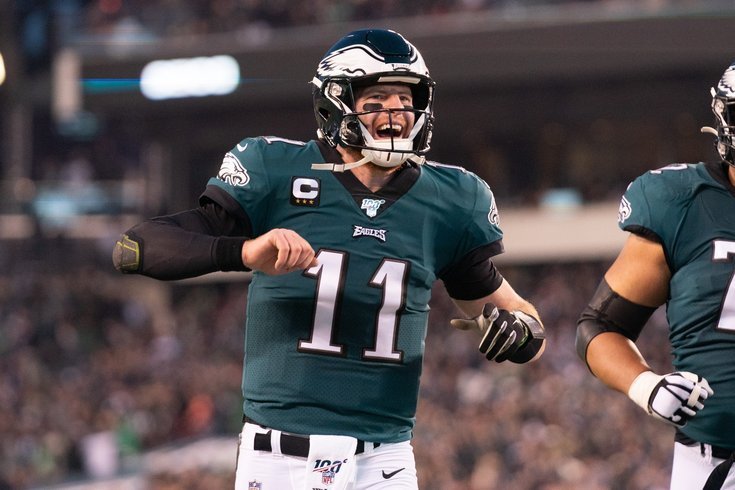 Welcome to our DraftKings Football selections for Week 17. I trust you all had a great Christmas and won fantasy titles (assuming you don’t play in the final week). With the end of the regular season, there are some games that are well worth targetting with must-win games throughout the slate. Let’s get into the picks!

Carson Wentz ($6,100) has had his receiving options decimated through injury, despite that Wentz has been impressive in his last four games. With Philadelphia in a must-win mode against New York, expect Wentz to put in another top performance.

Baker Mayfield ($5,700) will be looking to reverse the struggles he has had all season in the season finale. Cincinnati has allowed over 16 points to 11-of-15 quarterbacks this season. Although Mayfield was one of those, he only threw the ball 24 times in that game. After Miami ran riot on the last week, Mayfield is an intriguing option.

Ezekiel Elliott ($8,000) will be hoping to get the win that Dallas needs to make the playoffs (they also need help elsewhere also). Against Washington who struggles to defend the running back position and Dak Prescott nursing a shoulder injury, Elliott should be given a big workload.

Le’Veon Bell ($5,800) has not been a great fantasy force this season, and in a matchup against Buffalo, it’s not immediately obvious why he should be in consideration. However, Bell is likely to get over 20 touches in the game and against a team that is likely to try and rest some starting players before their playoff push. At this price point, you would struggle to find a player locked into so many touches.

Sony Michel ($4,900) is the running back for New England used to kill time and get goal-line work. New England is projected for over 30 points at home, and favored by over two touchdowns AND have been unable to stop the run all year. If you need to save salary for elsewhere there are worse options.

A.J. Brown ($7,000) gives exposure to the Tennessee offense, in a must-win game against Houston who has nothing to play for. Against Houston, in Week 15 Brown caught eight passes for 114 yards and a touchdown. After struggling last week Brown will be aiming to finish his season with a bang.

Odell Beckham Jr. ($5,700) seems such an odd price point, given his talent, but has struggled in Cleveland. Against a Cincinnati secondary who is missing multiple starters, expect Beckham to run riot and finish on a high note this season.

Greg Ward Jr. ($4,700) has been a revelation in the past few weeks. Ward has been targeted 23 times in the past three games, with 15 receptions for 166 yards and a touchdown. Philadelphia don’t have that many available passing options, which should mean a favorable matchup against New York are a game to target for the receiver.

Christian Kirk ($4,700) struggled last week, and it’s not certain who their quarterback will be this week. However, with Los Angeles sitting Jalen Ramsey they are lacking in cornerback talent, which should give Kirk plenty of opportunities to bounce back in the season finale.

Dallas Goedert ($4,900) is set to be the starting tight end for Philadelphia, with Zach Ertz looking likely to miss the game. At this point, there just aren’t many injury-free receivers left! Last week Goedert was heavily involved catching nine passes for 91 yards and a touchdown. With Philadelphia needing a win this week, Goedert is a good play.

O.J. Howard ($4,300) tied his season-high in targets last week, with the team missing both Mike Evans and Chris Godwin through injury. Tampa Bay has been out of playoff contention for some time, but continue to play their starters. With the team likely to continue to air the ball out, Howard will be looking to finish the year off well.

Green Bay ($3,000) face backup David Blough this week, who simply, isn’t a good quarterback. Green Bay’s pass rush has been phenomenal over the last three weeks, with 12 sacks recorded. With that constant pressure, the young quarterback is in for a torrid time.

Pittsburgh ($3,000) on paper is a matchup to avoid facing Baltimore. However, the team they are facing isn’t really the same team that has been ripping up the league this season. Pittsburgh have been an effective unit and will be looking to have a strong performance against their divisional rivals.