Mixon‘s impressive season is even more impressive when you consider just how bad the Bengals were last season. They had one of the worst offensive lines, but Mixon was able to overcome that handicap.

2020 Outlook: Mixon is a great selection for owners next season. I believe that his floor is what we saw last season, and if the offense is able to improve with the return of A.J. Green and the expected drafting of Joe Burrow, then he could have a top-10 ceiling.

Gurley‘s ability to play this season was the biggest talking point last offseason. It had people scrambling to take Darrell Henderson in the mid-rounds. However, that wasn’t to be. Gurley played the majority of the season, but in a season where the Rams stalled Gurley wasn’t able to impose himself on the league as in previous seasons.

2020 Outlook: Gurley has now been released by the Rams, and signed by Atlanta. Gurley should be a great fit for the Falcons offense and will be the lead back. That offense combined with the talent of Gurley means that a top 10 finish is a realistic outcome, barring injury.

Sanders was given the starting reigns right at the start of the season but was unable to be effective. However, he bounced back mid-season and became an important part of the Eagles offense.

2020 Outlook: If there was one area that Sanders was unable to succeed in, it would be in goal-line work. However, with the departure of Jordan Howard, that role is up for grabs.

Kenyan Drake, the forgotten man. After struggling to make an impact in Miami, he was traded to Arizona midway through the season. Drake then soon made the starting role his, with David Johnson struggling to be effective on the field.

2020 Outlook: Drake has been brought back by the team for next season, and Johnson has been shipped out of town. That means that Drake is likely to be given the starting job next season- something that was valuable in Arizona last season.

Jacobs‘ rookie season was great. Despite only playing 13 games, he was able to finish solidly as an RB2, and he had the most forced missed tackles behind a great offensive line.

2020 Outlook: Jacobs was fully trusted on the ground to move the chains, but wasn’t entrusted with the passing game opportunities which continued to go to Jalen Richard. Jacobs has the skillset to be a three-down back, but until the team uses him like that his value will be capped.

Bell certainly didn’t live up to the fantasy heights he did in previous seasons for the Steelers, with no big performances last season. However, the volume that he was able to get in the offense meant that he was a consistent finisher.

2020 Outlook: Bell gets a significant volume in the New York Jets offense, but he is unable to be the same efficient runner he was in Pittsburgh. There have been strong rumors that he will be on a different team next season, but his volume should mean that he is a safe RB2 for this season.

Lindsay returned to Earth after breaking out as a great value in the previous season. The biggest block to his value in games was his fellow running back Royce Freeman, who broke into the rotation.

2020 Outlook: The Broncos are in rebuild mode, but potentially coming out of the other side of it- at least on offense. Lindsay is a big part of the offense, but now with Melvin Gordon in town, Lindsay may find himself being sidelined.

Mack became the lead RB for the Colts in a season that felt like it was pulled together in a hurry. After Andrew Luck retired, the team had a big hole to fill. Mack was an effective runner behind one of the league’s best offensive lines, without much competition.

2020 Outlook: Mack‘s lack of competition in the backfield means that he is likely to be given a decent workload. And with Philip Rivers now signed to play next season, expect plenty of dump-offs out of the backfield. Mack could be a great value for next season.

The Atlanta Falcons season was almost de-railed from the start. The team invested heavily in their offensive line but didn’t see the benefits last season. Freeman was a major casualty of that poor unit, being stuffed in the backfield often. That led to his low rushing production in the year.

2020 Outlook: Freeman is currently without a team, having been released by Atlanta. However, based on his last season he still has the ability to be an effective RB. Depending on his landing spot he could be an effective RB2 for 2020.

Outside of Gurley‘s fitness, the other big talking point was Gordon‘s holdout. Once he returned to the team he took a bit of time to get up and running, but then was a borderline RB1/2.

2020 Outlook: Gordon has been picked up by the Denver Broncos, likely destroying the value of at least one of the RBs on that roster (most likely Royce Freeman). Gordon should walk into a major role in that offense, which started to have success at the end of the season.

White has long been a confusing running back because he rarely has a significant amount of rushing production. and 2019 was no different. White operated as a check-down option for Tom Brady, while Sony Michel took the majority of the backfield touches.

2020 Outlook: White has had value as a check-down option for his quarterback since he entered the league. However, with Brady out of the fold in New England, his value is up in the air until the new QB is known. If that new QB is mobile, then White‘s value will decrease significantly.

Mostert managed to sneak into the top 24, as part of a huge timeshare that the 49ers operated for the majority of the season. Mostert ultimately won the job towards the end of the season and in that time was a fantastic running back to own.

2020 Outlook: Mostert‘s outlook really depends on his ability to get a lions share of the touches out of the backfield. Or at least how much of the touches he will be able to get given the volume that the 49ers rush the ball

And that concludes our review on running backs from 2019. Stay tuned as we look at the wide receiver position next!

We are here with our Week 17 waiver wire adds. Most of you have likely crowned your winner, but… 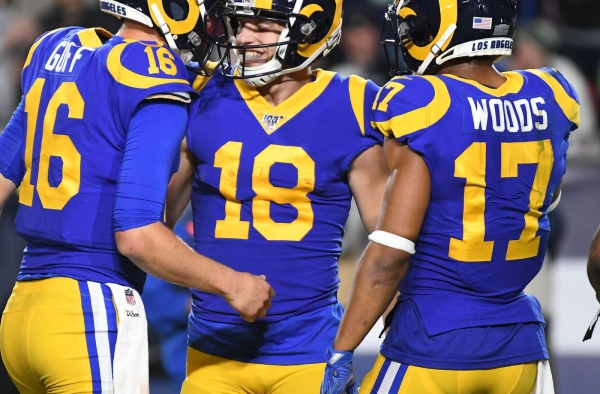 Training camp battles are what starts the fantasy cogs turning, here we focus on the battle for LA. The…