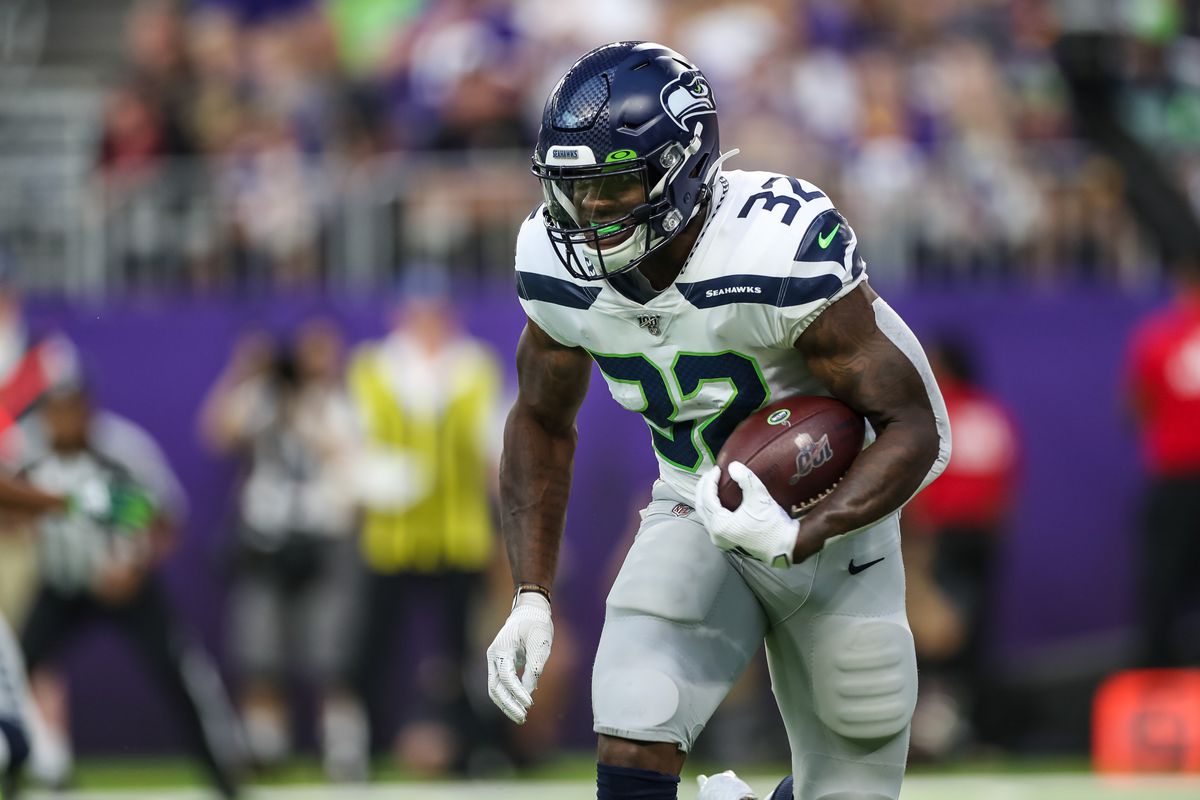 We know the Seahawks are a run focused team. The Seahawks backfield has primarily been led by Chris Carson the last two seasons. Carson’s been really productive for a seventh round pick back in 2017. Rashad Penny is an exciting young back that we’ve seen potential from in short spurts. They added depth with the Carlos Hyde signing in late May 2020. A couple other backs to note are fourth round pick, DeeJay Dallas, and fan favorite, Travis Homer. Let’s dive into the Seahawks backfield.

Last season Chris Carson was a workhorse with 278 carries, 1,230 rushing yards, and seven rushing touchdowns. His 1,230 rushing yards ranked him top five in the NFL last season sandwiched between Ezekiel Elliot and Lamar Jackson. Those 278 carries tied him for fifth in the NFL with Joe Mixon and right behind Christian McCaffrey. Carson had a career high 37 catches for 266 receiving yards and two receiving touchdowns.

One concerning note was that Carson had seven fumbles last season. When looking at the game logs, he had one fumble each in the first three games, then had four fumbles in a three game stretch in November. On the season Carson had a 65% snap share according to Pro Football Reference. Let’s look at his snap percentage in the three game stretch (week 9, 10, and 12) where he had four fumbles. During those three weeks in November his snap share was 85%, 96%, and 51%. The following week, week 13, Carson had a 52% snap share.

Let’s cross check Rashad Penny’s snap share and production in week 12 and 13 when Carson’s snap rate dropped. In week 12, Penny had 14 carries for 129 yards with one rushing touchdown. The following week, Penny had 15 carries, 74 rushing yards, one rushing touchdown to go along with four catches for 33 yards and a receiving touchdown. Penny was eating into Carson’s snaps and production in weeks 12 and 13. Then unfortunately in week 14, Penny suffered a knee injury that would end his season.

Chris Carson’s snap percentage went back up with decent production in week 14 and 15. However, he then suffered a season ending hip injury in week 16. Let’s look at a couple advanced rushing stats that make Carson appealing in 2020. In 2019, he ranked fourth in yards after contact and ranked sixth in broken tackles. He’s a hard runner that breaks tackles on a run focused team.

Carson’s snap percentage on Player Profiler was 73.9% in 2019 with a 71.5% opportunity share. Pro Football Reference has a slightly different snap share, but let’s focus on the opportunity share. Opportunity Share is the percentage of total team carries plus targets and Carson ranked tenth in the NFL last year. A few other notable metrics for Carson were red zone touches, breakaway runs, and evaded tackles. Carson had 43 red zone touches, which ranked 13th. He was third in breakaway runs with 13 of them. Breakaway runs are carries of 15 or more yards. Carson also had 85 evaded tackles which was sixth best. Player Profiler labels Carson as a “Grinder,” and these metrics show he also breaks long runs and misses tackles.

According to NFFC ADP, Carson is going at pick 39 as the 20th running back off the board. That’s probably a fair price if you take into account he’s coming back from a fractured hip injury at the end of 2019. Another risk would be Penny or other backs stealing touches and snaps, which we saw happening before Penny’s injury. However, he could also be a great value since he ranked 12th at running back in total PPR points last season.

The Seahawks mostly fed Carson the ball the last two seasons, which limited the opportunities for Rashad Penny. Penny finished the 2019 season with 65 carries, 370 rushing yards, and three rushing touchdowns. He also had eight catches for 83 yards and one receiving touchdown. Most of his production came in four weeks, weeks 2, 8, 12, and 13. In those four weeks, Penny had at least 30% snap share with his highest being 49% of the snaps in week 12.

When they gave Penny more opportunities in those weeks, he was productive and efficient. In those four weeks, he had 47 carries, 320 rushing yards, eight catches, and 83 receiving yards. All that production averaged out to 7.32 yards per touch, which shows that Penny can be efficient and explosive when he touches the ball.

Speaking of efficiency, Penny had 5.1 true yards per carry which ranked second in that metric. According to Player Profiler, the True Yards Per Carry metric “discounts all runs greater than 10 yards, which puts a premium on consistency and factors out the disproportionate impact of long runs.” Penny ranked fifth in another efficiency metric called Production Premium, which indicates that he was more efficient than other players with similar opportunities.

Penny tore his ACL in December 2019. The most recent reports say he may begin the 2020 season on the PUP list. If that happens, then Penny will miss the first six weeks of the regular season. The Seahawks have a bye in week six, so he may not be back until the middle of the 2020 season. Penny is a handcuff running back to draft and stash in an injured reserve spot. The backfield could look completely different by mid season when Penny returns. Penny’s NFFC ADP is 212, which is good value for a handcuff with his potential and explosiveness.

The Seahawks signed Carlos Hyde on May 28, 2020. The deal was probably done to add depth in case Carson and Penny aren’t ready for the start of the 2020 season. Hyde is 29 years old and on the back end of his career. Surprisingly in 2019, he had his first season with 1,000 rushing yards. He hasn’t contributed much in the passing game the last two seasons. And he won’t provide much value in deeper PPR formats if at all.

Last year he had 245 carries, 1,070 rushing yards, and six rushing touchdowns along with ten catches for 42 receiving yards. Those 1,070 rushing yards ranked Hyde 13th last season in between Aaron Jones and Mark Ingram. However, I wouldn’t expect Hyde to get similar production unless Carson and Penny both can’t stay healthy.

For what it’s worth he did have career highs last season in yards after contact (545) and broken tackles (22) according to Pro Football Reference. The opportunity and productivity metrics on Player Profiler might not be too relevant because he’s likely not going to get the volume he had in Houston. Hyde was top 15 in carries, red zone touches, and rushing yards.

In terms of efficiency, the only metric where he ranked inside the top 15 was breakaway runs. Overall, Hyde is a guy that needs volume to be productive. Running back is a position that depends on opportunity, especially because Hyde is not known for being explosive or efficient. Hyde has a 235 NFFC ADP, which is about 20 picks after Penny. And Penny is probably the guy that’s worth the gamble in this range.

According to Player Profiler, his player comparison is former Seahawks running back, Thomas Rawls. Rawls was a tough runner and had some productive stretches during his time. However, Dallas is the fourth or fifth running back on the depth chart. Dallas has a 270 NFFC ADP, and he’s probably not worth owning in redraft leagues unless there are deep benches. On the flip side, he’s definitely someone to draft and own in dynasty and keeper leagues.

Travis Homer was drafted in the sixth round of the 2019 NFL Draft out of the University of Miami. Last season, he started the year on the practice squad. Then when Carson and Penny got injured, Homer’s number was called. Homer’s most productive game was the last game of the season where he had ten carries for 62 rushing yards with five catches for 30 receiving yards. In late December 2019, the Seahawks signed Marshawn Lynch due to the Carson and Penny injuries. Homer and Lynch shared carries/snaps, but both weren’t exciting fantasy assets. Unless there are deep benches, Homer is not worth owning even with a 306 NFFC ADP.

So what do you think about the Seahawks backfield for this season?