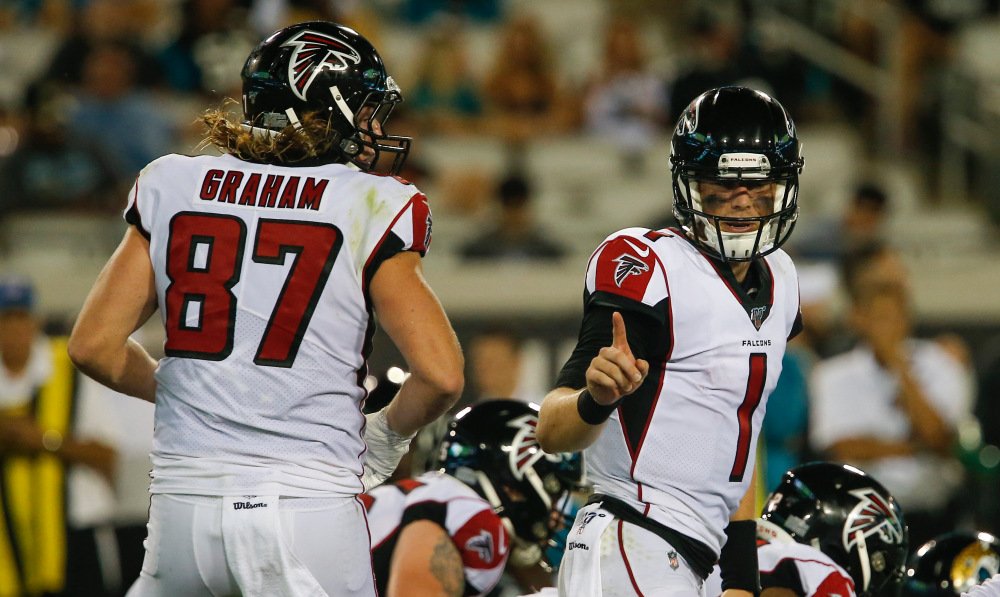 Finding a deep TE stash option is gold in fantasy, this season that guy is Jaeden Graham. Getting in early on the likes of Mark Andrews who was drafted later last season, or picking up Tyler Higbee on the waiver wire. We aren’t talking about a redraft add, this is more for players in deep dynasty and 2TE leagues.

The magic combination in fantasy football is talent plus opportunity. This is true at every position, but especially tight end, considering the overall scarcity at the position right now. Those of you who play TE premium or start 2TE leagues know this struggle all too well. O.J. Howard has loads of talent, but he’s probably not going to have the opportunity to score enough this year, especially with Gronk back eating up targets. Drew Sample might have loads of opportunities, but he doesn’t have the receiving talent to take advantage of it. We need both, but guys with both will cost you.

Since TEs develop slower than RBs or WRs, one option for those of you with deep rosters is to stash a TE that you think has the talent, but lacks the opportunity. Rosters change, coaches get fired, and injuries happen. One day, that guy stuck behind an entrenched started might get his chance. You want him on YOUR team when he does take over.

We all have those players that we hang onto way too long, until they’re taking up a roster spot just because we like how their name looks on our bench. Occasionally, it pays off, and it is beautiful. I was a Tyler Higbee fan WAY before it was cool. I was the guy carrying Higbee in my lineup the past three years, with league-mates asking if I really knew who that was. Now, Higbee is a top 10 tight end and a valuable 2TE asset. Once Higbee got the opportunity to start, he took advantage. In 2019, Higbee outdid his reception and yardage totals from the three previous years COMBINED. So who is the next hidden gem that I’m going to get funny looks for rostering? Meet Jaeden Graham.

Graham is a second-year tight end out of Yale, where he came in as a linebacker and didn’t convert to tight end until his senior year, allowing him to fly under the radar and sign with the Falcons as an UDFA. I’ve always seen a little bit of Higbee in Graham’s game, so imagine my satisfaction when I looked up Graham on PlayerProfiler.com, only to find out that his best comp is none other than Tyler Higbee!

Their 40 times and speed scores are almost identical, but nothing that’s going to blow you away. The thing I love about both players is their hands. They both have the ability to grab anything that comes near them and pull it in for the reception. Higbee’s catch percentage has steadily risen each year with the Rams:

Jaeden Graham’s catch percentage in his rookie year was 90%, albeit in limited snaps. However, his preseason catch percentage (also limited snaps) rose from 50% in 2018 to 75% in 2019, giving us more to evaluate and improvement that you like to see. Watch Graham’s tape and you’ll see both his athleticism and hands flash, from hurdling a player to holding onto a touchdown catch through contact.

He has the hands, he’s got the athleticism, now he just needs the opportunity. Get him on your roster before that happens. You should be able to scoop him up off waivers right now, so it’s a low-risk gamble that could pay big time rewards.

Some better known players to consider grabbing, depending on league size and need are Ian Thomas (his opportunity is coming this year, so grab him if your league hasn’t realized this), Irv Smith Jr. (unlike the timeless Christmas classic, Kyle Rudolph can’t stay around forever), and Dawson Knox (he’s pretty much taken over for Tyler Kroft already). Acquire those young tight ends now, because their value is only going to increase with opportunity, and you’ll be smiling when you’ve got a great player that didn’t cost you a fortune.

So there you have it, a deep stash that could break out and have great value in future years. But tell us what you think. You can find us on Twitter, Facebook and Instagram.