Kenyan Drake primed for a breakout? Not so fast, my friend. 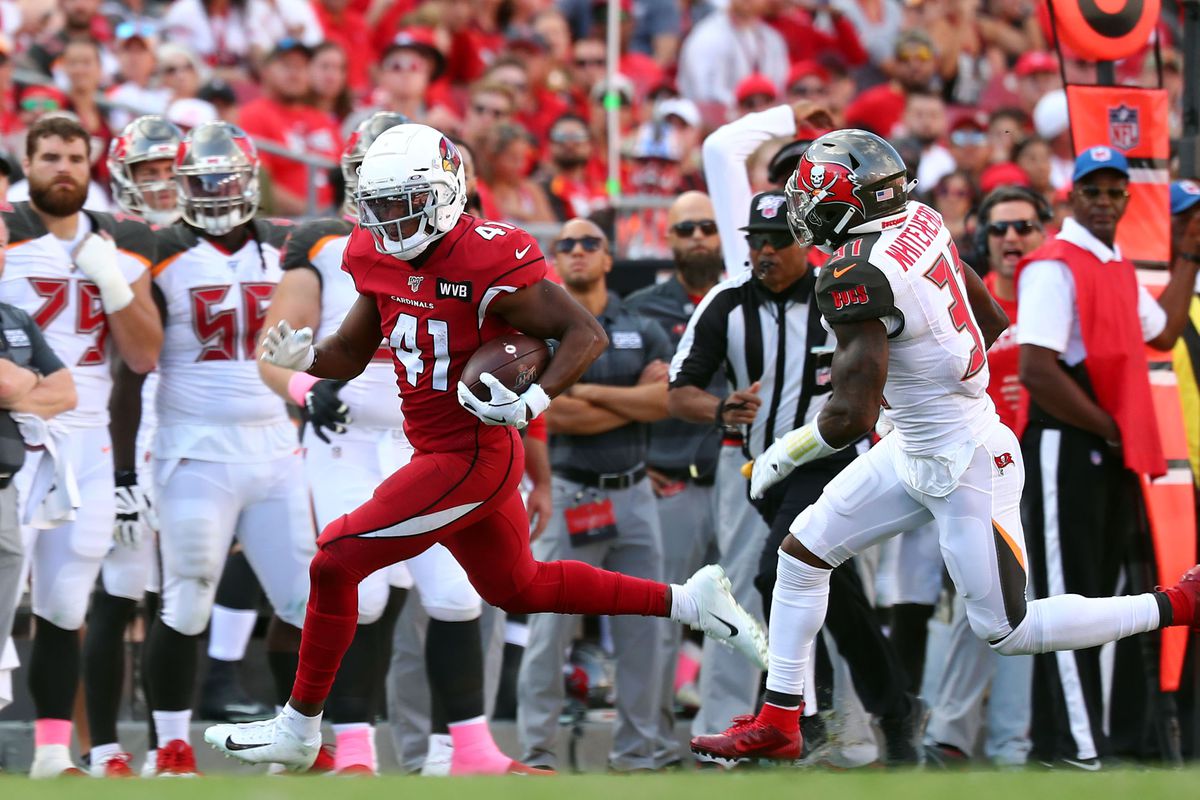 Kenyan Drake was a forgotten man in fantasy, until he moved to the Arizona Cardinals, but for next season will he regress or impress?

Kenyan Drake’s best college rushing season at Alabama happened to be his sophomore year, in 2013. Alabama was preseason #1 and survived a scare against Texas A&M early in the year. The Crimson Tide seemed destined to play in the national championship game. But as Lee Corso often says, “Not so fast, my friend.” Alabama lost their last two games of the year and finished ranked #7/8 in the polls. Florida State ended up going undefeated that year and brought home the last crystal ball of the BCS era. Did I mention that both Corso and I call Florida State our alma mater?

I’ve been reading a lot of Drake love this offseason. He’s a popular breakout candidate and there are some reasons why you might believe that he’s in for a huge year. So what am I saying when people ask me what I expect out of Drake this year? Not so fast, my friend.

Kenyan Drake was traded from Miami to Arizona mid-season last year and went on a tear with the Cardinals. Drake averaged 5.23 yards per rushing attempt, compared to the 3.7 yards per attempt that he had put up with the Dolphins. However, if we dig a little deeper, we see that he did the vast majority of his damage in three separate weeks. He put up big numbers against the 49ers in week 9, the Browns in week 15, and the Seahawks in week 16. His rushing yards per attempt in those three weeks? 7.33, 6.23, and 6.92, respectively. He didn’t top 5 yards per attempt in any other game last year. Take those three weeks out of the equation and his year is much less impressive.

The Niners, in week 9, while a great overall team last year, were only the 23rd best rushing defense in the league. That was also Drake’s first week as a Cardinal, so teams had no tape on how Arizona would use him. Personally, I’m taking this week with a grain of salt.

The Browns were the 30th best rushing defense in the league last year… and it was week 15. The Browns rush defense couldn’t stop opposing teams to begin with, and they were just 6-7 on the year. While mathematically still alive for a playoff spot, the Browns weren’t realistically contenders to make much noise. They went on to lose those final three games, including the game against Arizona, to finish 6-10. That stretch was no picnic for fans, but did give them a top 10 draft pick to build for the future.

That leaves us with the Seahawks in week 16. The Seahawks had the 28th best rushing defense in the league, which isn’t all that impressive. The Seahawks were 11-3 coming into this game and had just clinched a playoff spot. They did still have home field to play for, but dealt with a slew of injuries to both the offensive line and running backs, leaving their offense a shell of its former self. Seattle’s offense managed just 13 first downs all game (their second lowest total of the year) and were unable to move the ball or sustain drives. That left the Seahawks defense with a heavy workload and Arizona ran it right at them, giving Drake his highest carry count of the year. This was an odd week for Seattle (not in a good way) and Drake took full advantage.

You can probably see why I’m slow to buy into the Kenyan Drake hype. Drake’s huge numbers last year came largely from three games against bottom-half-of-the-league rushing defenses, including two of the worst in the league. Two of those games came at the end of the year and the other was Drake’s first week as a Cardinal. Those are funny times to put up big numbers and make me slightly more worried that they’re a fluke.

I’m not saying that Kenyan Drake can’t be a great running back this year. What I am saying is, let’s slow that hype train down a bit. I want to see sustained success before I start including Drake with the best running backs in the league. Personally, if I have an owner in my league who is buying the hype, I’m selling Drake. If you can get current value for him, take it. Assuming he comes through, you still sold high. If he comes back down to earth, you will have taken full advantage and your team will be better off for it.

Rushing defense rankings determined by 2019 yards per attempt against.

If you have a player that you want to be covered then let us know by reaching out to us on our social channels. You can find us on Twitter, Facebook and Instagram.