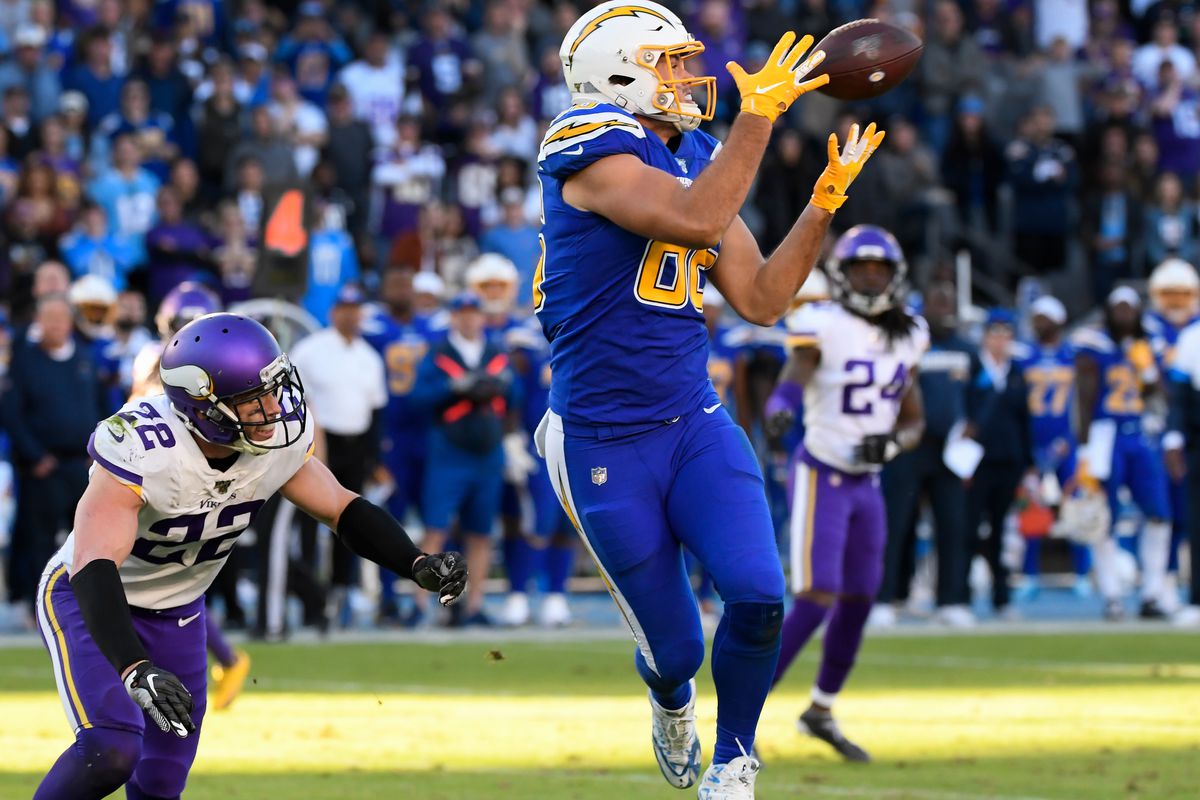 With Phillip Rivers heading to Indianapolis and the Chargers drafting Justin Herbert, there are a lot of questions surrounding this offence heading into the 2020 season.

Here is what you should expect from one of the more intriguing commodities fantasy football-wise.

Offensive coordinator Steichen may have taken over this role from Ken Whisenhunt back in October but now is the time we should consider his reign to officially begin.

Chargers head coach, Lynn when questioned has backed up Steichen as the man to take this offence forward with a new QB room in his hands, and one which he can mould.

Lynn wants his offence to focus plays from the centre more frequently this season, through a variety of run-zone runs and play action.

This is all in the hope that an improved offensive line can provide better pass protection for the QB and improve the passing efficiency.

Kyle Shanahan of the 49ers and Sean McVay of the LA Rams have been seen to implement similar systems for their respective franchises.

If only it was that easy.

Taylor will start Week One, and for some time after that

Whilst a Steichen offence benefits a QB like Herbert hugely, the mention of moulding comes up again and this is something that may take a while with Herbert.

Taylor in Buffalo and beyond

With an interception rate of just 1.4%, Taylor can be a solid game manager and keep LA in games in a variety of ways. One of those ways is a solid ability at scrambling as a starting QB in the NFL. At Buffalo, Taylor’s 2016 season of 580 rushing yards alongside 6 touchdowns were both his best for those statistics. Coincidently enough, this was when Lynn was the offensive coordinator in Buffalo. This was in addition to an 89.7 passer rating, also a career-high figure. Admittedly at 31, Taylor may not be looking to scramble at every chance he gets but when needed, he can effectively.

Lynn and Taylor have previous pre-Chargers and will know how each other work. This means they can likely be on the same page when it comes to Herbert’s development. Taylor has experience in the role after all with his role in Baker Mayfield’s development in Cleveland.

For now, I have Taylor and Herbert splitting the snaps 60/40. This, of course, could change depending on Herbert’s development and Taylor’s play.

If Herbert can work on how he deals with pressure better and learns the offence to a stellar standard. That ratio could come down.

Melvin Gordon III heading to division rivals Denver means after an RB6 finish in fantasy leagues last season, Ekeler gets the keys to the Chargers backfield.

Ekeler will not be a ‘bellcow’

Gordon leaves behind him a 61% rushing share that will need to be distributed among the group in LA. I think it is fair to say Ekeler will see a jump from his 35% share last season, but perhaps not as much to warrant a ‘bellcow’ title.

The backups to Ekeler

Ekeler will probably not get this title as he has two very capable backs behind him in the third year back Jackson and fourth-round rookie Kelley. Jackson’s impressive 5.1 yards per carry last season sees his organisation have very high hopes for him going into 2020. Kelley enters the league after a breakout year for UCLA, rushing for 1243 yards and 12 touchdowns.

For now, I have the rushing share broken down as follows:

Why Kelley will beat out Jackson

For me, Kelley represents more of a workhorse running back than Jackson. At 212 pounds and being 5’11”, Kelley represents the typical workhorse back build and has that breakaway speed shown in college. Jackson as a change-of-pace guy is great, but he is not a guy who should be taking 10-12 carries a game in the NFL. If Kelley can make the most of his limited carries early on, he will replace Melvin Gordon III adequately.

Ekeler will still own the receiving work

One area where is no doubt about where the work is going to is the receiving work out of the backfield. Ekeler finished last season with an incredible 92 receptions, only beaten in his position by the infamous Christian McCaffrey.

I will be shocked if Ekeler manages to produce those numbers again with a more mobile Taylor at QB. However, Ekeler will still be one of the best receiving backs in the league this upcoming season.

With three consecutive seasons of going over 1,000 yards, Allen has the Chargers bonafide WR1 over the last few seasons, but will that stay the same under Taylor? More than likely.

Allen will force himself open

With Taylor being this game managing QB like we spoke about earlier, he is going to need his receivers to create separation and be available in the short and immediate routes.

This is where Allen excels. With Allen’s 2.7 yards average separation ranking for 2019, alongside his elite route-running, Taylor may have his check-down man.

On the other hand, owners of Mike Williams are going to require a bit of patience. Taylor is not going to be a QB that will air the ball downfield for deep threat, Williams, to go up and get. Taylor simply does not have the arm.

The story changes once Herbert is introduced

However, once Herbert comes in, the targets could dramatically decrease for Allen. There have been questions over Herbert’s processing of the field whilst at Oregon, leading to high sack numbers when under pressure.

Herbert with his cannon arm would rather launch it downfield to Mike Williams or find Hunter Henry wide open for fifteen yards then wait for Allen to complete his route.

I think the Allen to Herbert connection will take time and one which could hurt Allen heading into 2021 as an unrestricted free agent.

Williams will benefit once Herbert becomes settled as the starter, or maybe even right away. It all depends on how quickly the play-action schemes are mastered and applied on the field. It is just more likely that when Herbert comes in, Mike Williams will shine. Herbert’s deep ball passing and Williams downfield threat seems like a match in heaven if they can get on the same wavelength.

I am not much of a dynasty guy but stashing Williams away from a playoff run this season seems like a solid play so long as you can get him for a reasonable price.

Even in re-draft and/or best ball leagues I would not shy away from a Mike Williams pick so long as you are not relying on him to start week-in, week-out.

Keep an eye on Joe Reed

If he makes the roster, Day Three draft pick Joe Reed could be an alternative to Ekeler underneath for pass-catching purposes.

Reed brings a skillset that Allen and Williams cannot offer build wise and was a yards-after-catch ability with his quickness and elusiveness.

When it comes to Hunter Henry, I am expecting Henry to have the smoothest transition from Taylor to Herbert in 2020, if such a transition happens. But even if this transition does not happen it will not matter too much.

Taylor has grown to target the tight end position

Referring back to when Taylor was in Buffalo, as every year passed with Taylor at QB, he targeted the tight end position more and more after every year. His numbers to the position went from 103 targets, 719 yards and 3 touchdowns to 114 targets, 947 yards and 5 touchdowns. The tight end situation in Buffalo was a lot different also to the one in LA currently. Charles Clay and Nick O’Leary in 2016 was used in a very similar situation to how the Ravens used their group of tight ends last season. Henry this season has no real competition behind him and will see a large majority of targets from a favoured position of Taylor’s.

So does Herbert have the same tendencies as Taylor?

Well yes, he does.

Herbert had a very similar big-body target to Henry in Jacob Breeland at Oregon who in his six games last time out took in 405 yards and six touchdowns.

This familiarity in the middle of the field could be huge for the rookie QB. This season is all about learning the ropes of a new offence moulded around him and Henry establishing a connection early could mean great things, now and in the future if the tight remains in LA after this season.

The health of Henry has been a consistent issue. The tight end missed all of the 2018 season and has only started 75% of games in any season once in his four years in the league.

This is an obvious concern, but his upside is more than worth that risk. Henry finished as the TE9 in PPR leagues only playing 12 games and was coming off a full season out injured.

He is expected to see more targets, especially with the uncertainty around the receiver group. If he plays the full 16, Henry will break into top three tight end conversation.

So, to summarise, Henry will be the main beneficiary of this offence. Ekeler is a close second but regrettably will see some regression after a crazy season last time out. If you can get Ekeler as an RB2, you are doing well for yourself.

Outside of those two, there are plenty of question marks as to who can produce consistently for a full 16 games.