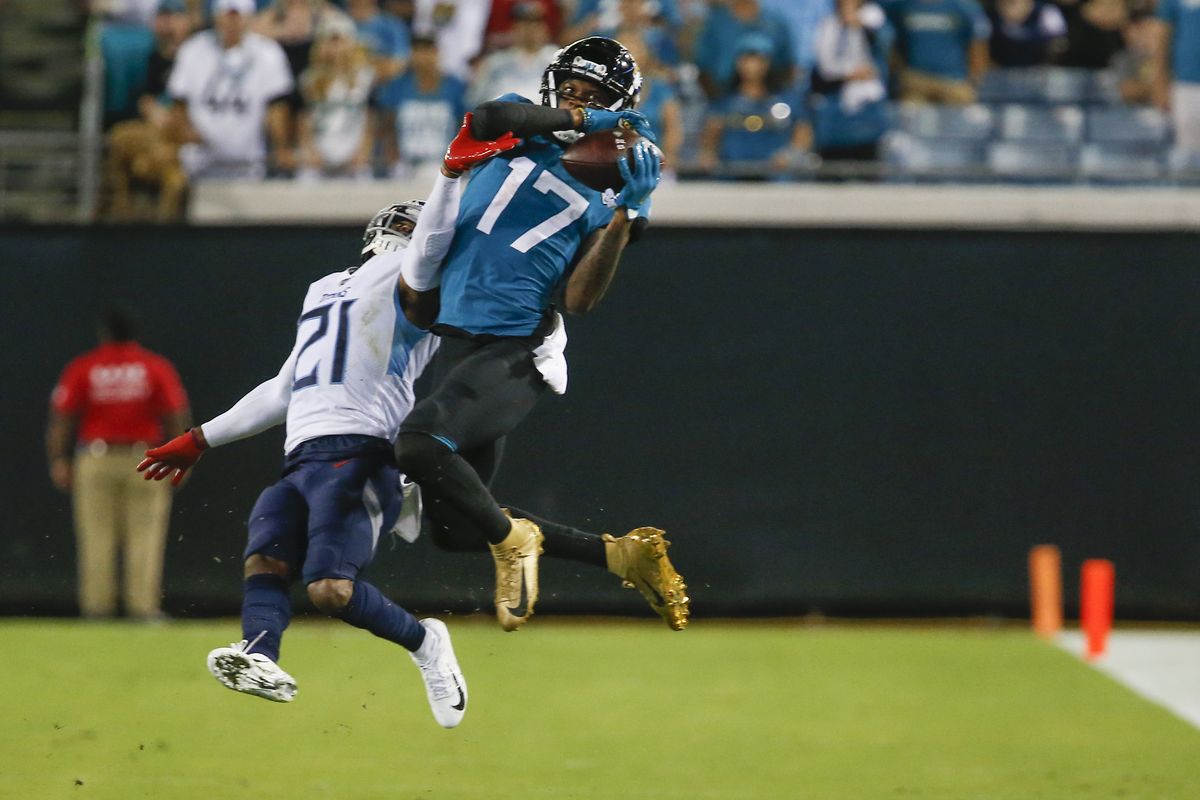 The theory of the third-year wide receiver has been around for many years. The third season is when a receiver truly understands the offence and is in the best position to peak as a player.

Whether you believe this theory or not, it is certainly not a myth like some make it out to be. There are plenty of cases for second-year breakouts like A.J. Green and DeAndre Hopkins improving their stat lines in their third year.

This article takes a look at some key third-year wide receivers in drafts and whether you should be targeting them for your rosters.

Chark finished comfortably as a WR2 last season, arguably having his breakout season in his sophomore year. Remember what we said about Hopkins and Green? The same will happen to Chark this season.

This second-year breakout of Chark’s came at the same time of the introduction of Gardner Minshew II, a player who we broke down in the AFC Breakouts article for 2020.

As spoken about in the article, Minshew II is now the clear starter in Jacksonville with Nick Foles heading to Chicago. This can only be good news for Chark, who saw the good majority of his 1,000+ yard season and 8 touchdowns come from Minshew’s arm.

Whilst Minshew was not necessarily an efficient QB last season, Chark was still able to make 82% of his targets catchable. Chark elevated Minshew’s game. Minshew achieved a 109 passer rating when targeting Chark, and a healthy 9 yards per attempt, which is 2.1 yards more than any other Jaguars receiver.

It may seem that we have focused a lot on Minshew here but it is important to understand that the QB is going to target players who he feels comfortable with and knows can produce, and Chark is certainly this.

Chark’s numbers last season were achieved on an offence that ranked 26th in points scored. Even if this team jumps up a few spots, Chark will be at the heart of it.

DO NOT TARGET: Courtland Sutton

Now do not get me wrong, having Sutton as my flex play in some leagues last season was a league winner for me, but I do not fancy taking the Denver receiver in 2020.

With the draft additions of Jerry Jeudy and K.J. Hamler, there will be a lot more competition for targets than there was last season. Sutton saw the luxury of a 28% target share.

My concerns do not just come with rookies entering the fold, they also come with Lock and Sutton’s chemistry on the field. The introduction of Lock saw Sutton’s fantasy production drop off slightly to 12 points per game, this figure averaged out at 14.1 when Flacco and Allen were under centre.

It is tough for me to see Sutton achieve a WR2 finish once again in a decreased target share and less time for the offense on the field due to Denver’s defence taking a step up this season.

At his current ADP of WR18, there are better options on the board at that range for me.

Arguably the most talked-about receiver on this list, Ridley deserves all the attention he is getting.

With Matt Ryan under centre, this is an elite offence who are apart of the NFC South, which will be shootouts left and right. With Julio Jones opposite him, Ridley does not have that WR1 focus on him from defences. At the same time can provide WR1 upside for your fantasy teams, the perfect combination.

The introduction of touchdown-dependent Todd Gurley is positive for the pass-catchers of this offense. In LA, we have seen Gurley be riddled with injuries and struggle to cope with a feature back role, highlighted by this 3.84 yards per carry in 2019. If this continues in 2020, this, in theory, this opens up the same passing opportunities like last season, if not more for Ridley.

Since Ridley joined Atlanta, we have seen his targets go up every season, 5.8 targets per game in 2018 and 7.2 in 2019. Who says this cannot happen once again this season?

Well, the acquisition of Hayden Hurst may damper things slightly. Hurst will likely take up the majority of Hooper’s 17% target share from 2019. However, Ridley last season would have still projected for 124 targets if he played the full 16 games, which is still great for a WR2.

When we look at Ridley as a fantasy option, he has that incredibly safe floor so long as Matty Ice is throwing him the ball. Ridley is projected to be my WR13 for good reason and he certainly has WR1 potential if something unfortunate was to happen to Jones.

DO NOT TARGET: D.J. Moore

There is no doubt that Moore an incredibly talented receiver, but for a WR11 ADP, I have question marks as to whether he can return your investment in drafts.

Someone on his Carolina offense is not going to get the targets that everyone expects.

Some have said Christian McCaffrey could be that man, but I do not see the highest-paid running back in the league and the main building block for this franchise going forward getting a significantly reduced workload.

Then we have Curtis Samuel, a third-year wide receiver himself who is coming off a lacklustre sophomore campaign and could be utilised in this offense uniquely by Joe Brady with his rushing capabilities. We have not even mentioned the fuel added to Samuel’s fire with trade rumours all offseason, Robby Anderson joining and Samuel being an unrestricted free agent in 2021.

Speaking of Anderson, I do not have him being of a factor in this offence initially. However, he is still a player who can take targets off Moore so, therefore, poses a threat to his stock.

Players like Ian Thomas, who had an 11% target share last season behind Greg Olsen are bound to see their target share increase. Olsen has now left for Seattle and Thomas gets to be the TE1 with a QB in Bridgewater who loves to target his position. You can read more of Thomas in my NFC Breakout candidates for 2020 article.

With all things considered, no matter how talented DJ is and the likelihood that Carolina will mostly be chasing games this season, his ADP is too high.

These two receivers have been put together as they are in similar situations heading into Year Three, following solid sophomore campaigns for their respective franchises.

Hopkins joining Arizona in that crazy trade with Houston makes him the instant WR1 for Kyler Murray. I can understand why Kirk’s stock would drop, but to drop to the level it has is pretty crazy.

Kirk’s current ADP is WR42 or the mid-12th round. Now spending a 12th round pick on a player that saw a 20.3% target share last season whilst carrying an injury, in addition to a 70% target share that the Arizona WRs saw last season, the highest in the league, seems pretty good value to me.

I do not have Kirk’s target share dropping that much at all in this Kingsbury offence, and the offence as a whole should progress heading into Year Two. I would be drafting Kirk wherever I can at this ADP.

After a breakout WR2 finish for Gallup last season, he was rewarded with Dallas drafting CeeDee Lamb in the first round of the draft. In all seriousness, however, Gallup will still be ‘getting his’ in this offence.

Dak Prescott will be throwing the ball a lot this year, and when I say a lot, I mean probably more than the 596 times he did last season. Gallup last season saw 112 of those targets in mostly a 3WR personnel, with formed 60% of the Cowboys formations on offense.

From the wide receivers, I have the targets broken down as follows:

This increase in targets from last season is mostly down to McCarthy’s tendencies to target his receivers. This is also at a higher rate than Moore did last season. Thanks to Nick DeJong’s thread, we can see that whilst in Green Bay, this was 61-66%.

When players like A.J. Green, a player who has not seen the field consistently for years are being taken over Gallup, you know something is up.

Both of Kirk and Gallup are terrific value plays in your drafts and should be on your draft boards.

James Washington: Would not target in redraft, worth a late round pick in best ball

Auden Tate: Do not target