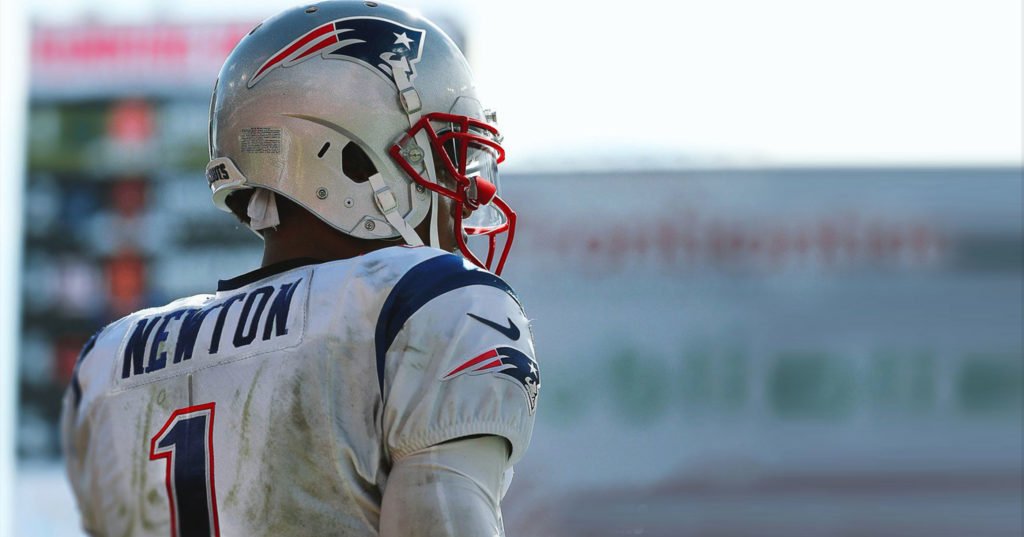 After all the rumors and stunned tweets about how he was not signed yet, Cam Newton gets to join up with Bill Belichick in New England. As a Dolphins fan, this is the last thing I wanted to hear.

So how should we look at this New England offence with Newton under centre? Well, let’s take a look.

Newton’s time in Carolina ended on a fairly sour note. Plagued with injuries, Newton was released in the 2019 season, after only playing two games. This, as expected left a bitter taste in Newton’s mouth and from his continuous workout videos, you can assume he has put the work in not only to get healthy but to prove the doubters wrong.

One time that Newton did not have any doubters was his 2015 MVP season, where his pass attempts had a career-high 7.1% touchdown rate and a joint career-high 4 game-winning drives. Newton achieved those numbers alongside a 636 rushing yard and 10 touchdown season without top-tier receiver talent to throw to, the most reputable being Greg Olsen, who saw over 1100 yards on the year.

The only time Newton has ever come close to replicating this MVP form was in 2018, where he was the QB2 at one stage in the season before those injuries returned and a QB9 finish was the result. The 67.9% completion rate on passes was a rarity in Newton’s career, as this far exceeded his 59.6% career average. This was mostly down to his average depth of target falling off a cliff due to an inability to throw downfield, Newton’s own words, not mine.

Only 8.7% of Newton’s went 20+ yards from the line of scrimmage that year, the lowest in the entire league through the first eight games among starting QBs.

You may be wondering why I am throwing all these numbers at you? Well, it is because this is exactly how Belichick will be using Newton in New England. Short and immediate plays to systematically wear down your opponent. Newton as this stage in his career offers everything Brady could as a QB but also has the ability to get out of tight windows with his legs, something Brady never really mastered.

So, what does all this mean for Newton’s receivers? Well if those shoulder issues are still prevalent, then Belichick has planned for it vigorously.

The letting go of Phillip Dorsett to Seattle means the top 3 wide receivers for Newton to throw to are veteran and ever-present Patriot Julian Edelman, sophomore N’Keal Harry and Mohammed Sanu. Not exactly the most exciting core of players but Newton has certainly seen worse in his career.

All of these 3 options averaged no higher than a 7.5 yards per target last season, playing into the short and immediate comments made earlier. So you begin to get into the mind of Belichick when going over New England’s offseason process.

Edelman is the only player that has been able to support a 100+ target workload in a season. This alongside being Belichick’s ever-reliable makes Edelman a very nice fantasy option.

Edelman is a player who was not on my draft board initially to now someone who I am targeting at the end of the eighth round of drafts, potentially earlier.

When it comes to N’Keal Harry, I am a little undecided. His rookie year was cut short by injuries and he is a talented receiver with a solid skillset. However, he is more of an outside, big-body threat who can succeed in the red-zone, if Newton can drive the team there at a solid rate.

In terms of receivers around his ADP in the 14th round, I am probably more likely to take a risk on more proven talents like DeSean Jackson, but I would not blame anyone for taking a punt on the sophomore.

Despite the QB change, Mohammed Sanu remains a waiver wire pickup if needs must. Yes, I have seen the workout videos.

James White is the player I am most excited about in this offense. White is the closest thing to CMC in New England, who saw 124 targets from Newton in 2018 with his injured shoulder.

If we are going along with the narrative that ‘Checkdown Cam’ could become a thing, then White could see a boatload of targets, perhaps more than his 21% target share in 2018.

I have been happily drafting White at the RB36 with the assumption that Stidham would be the starter, so the fact that Newton is the assumed starter moves White up my rankings and puts a ‘draft everywhere’ sign over his name.

Sony Michel is another player who is intriguing me the more Newton film I watch. Newton offers that extra presence in the box which offers an air of unpredictability for defences which could see Michel’s rushing lanes open in play-action sets. So long as Newton can read that the play that has been drawn up may not go according to plan.

Michel’s injuries do worry me though. He has battled injuries his whole career and a foot surgery this offseason could see him open 2020 on the PUP list which would be disastrous for drafters.

Damien Harris, Michel’s backup feels like a must-draft if this is the case. There could even be an argument for Rex Burkhead in deeper leagues.

The group consists of two rookies in Devin Asiasi and Dalton Keene, third-year player Ryan Izzo and veteran Matt LaCosse. Not very appetising on the face of things.

I think out of these four tight ends, Asiasi offers the most promise. He comes into the league following a 44 reception, 641-yard season, accompanied with 4 touchdowns in his final year at UCLA. Some people thought the Pats made a mistake by trading up to take Asiasi but I am not so sold on that narrative. Asiasi offers Belichick in the words of UCLA tight ends coach Derek Sage, “a little bit of everything”.

I hope that Asiasi sees the field a lot and can see some passing work from Newton. It is a dart throw, but I like to think it is an educational one.

An incentive-laden Newton is going to ball out, as much as it is about respect for Newton rather than money, it is also about how the Patriots get who Newton is a QB in this stage of his career.

The modern-day Newton suits exactly what this Patriots offense is all about and make no mistake that Belichick has planned all of this to happen accordingly.

Who would have thought that the Patriots would have gotten better after losing the GOAT? Certainly not myself.

Julian Edelman and James White are two players I quite like the look of now that Newton is under centre. Edelman is without a doubt the No.1 target in this offense and will get a lot of looks from Newton. White, especially in PPR formats is a steal at his current ADP and someone I am targeting everywhere. White will be used in a lot of creative ways by McDaniels so he sees a similar volume to that of 2018, if not more.

Sony Michel is another player who is on my watch list for now. Those injuries worry me, and I feel I am forcing myself to draft Damien Harris if I do end up getting Michel.

Everyone else is a steer clear now for me unless you are taking a punt on Devin Asiasi.