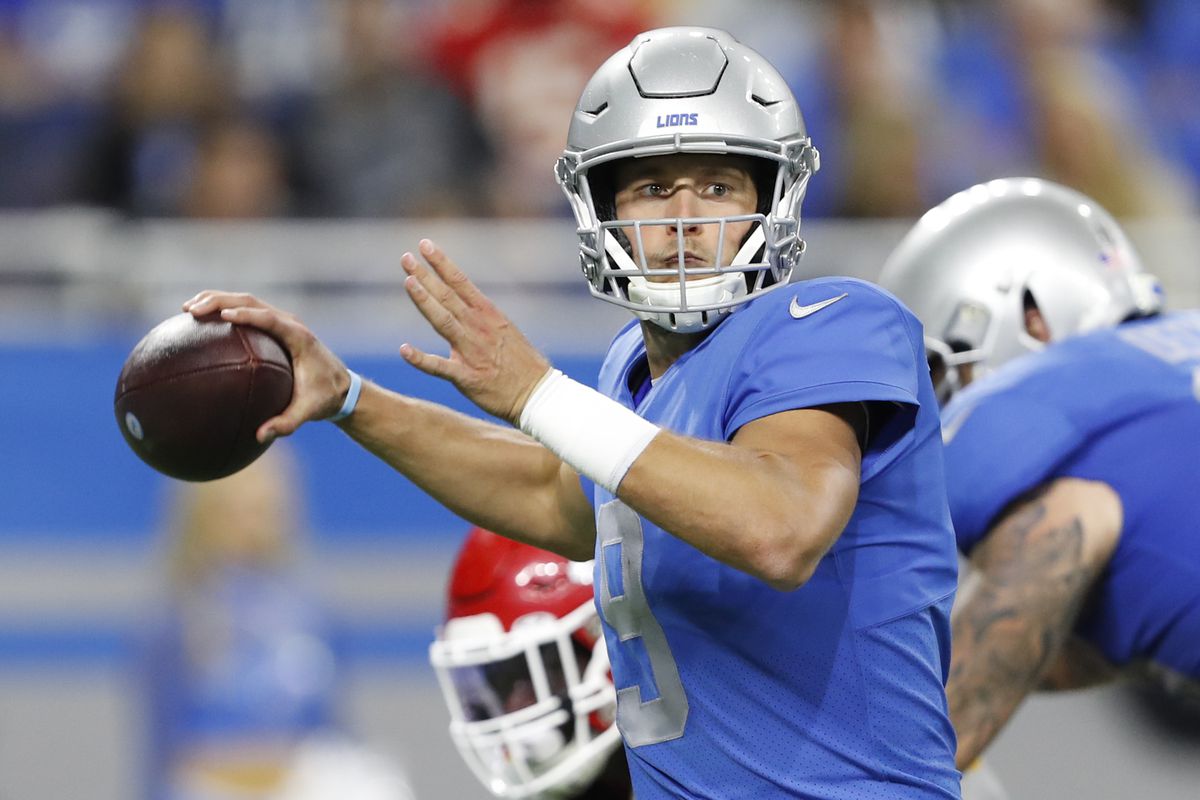 We all understand everyone wants that shiny new toy, but there are plenty of veteran QB discount candidates in the league. Especially in Superflex leagues, new kids on the block Lamar Jackson and Patrick Mahomes are often taken in the top 10 picks. Leading to the domino effect, with quarterbacks quickly flying off the board. In this article, I am going to discuss 4 quarterbacks that you can choose to take later in your draft, and still stand a chance in winning leagues.

Let’s start with Matthew Stafford. When Stafford plays a full 16 games, his stats are remarkable. Where he has played 16 games, he is throwing for an average of 4,466 yards with 27.25 touchdowns. As well as 106 rushing yards with 1.4 touchdowns a year.

Now that he is getting older, the general thought process may be that he is starting to become fragile. But until Stafford tried playing through his back injury that ultimately took him out in 2019, he was on pace to throw for 4,998 yards, 38 touchdowns, and 10 interceptions. Those stats would have made him a top 10 quarterback last season.

Additionally, Stafford has two talented teammates by the name of Kenny Golladay and Marvin Jones that can individually get 1,000 yards when Stafford is healthy. Let’s also not forget about TJ Hockenson, who showed his athleticism in the first game of last season against Arizona.

The Lions also drafted D’Andre Swift, who was not only a great runner but had 77 catches and 666 yards in his career at Georgia.

So with all this being said, I predict that Stafford will be a late-round flyer for league picks. Matthew Stafford will be available later in drafts, and could have the production to give high to mid QB1 numbers.

When looking back on the 2019 Steelers team, there was no real wow factor that I can recall. This was all in part to the injuries of the big three: Big Ben, Juju, and Conner.

Roethlisberger only played the first two games, before having his season-ending elbow surgery. But let’s not forget about the 2018 season when he threw for 5,129 yards and 34 touchdowns.

Having Antonio Brown, and it also being Juju’s rookie breakout season. If you look at the Steelers offense for this season, it should still have you buzzing. Conner and Juju are both coming back healthy, and are in contract years, so you know they are going to ball out.

To list some additional help, Diontae Johnson had a great end of season run with Mason Rudolph, so imagine what he can do with Roethlisberger. Also, the signing of Eric Ebron should have everyone excited about his size in the red zone.

Let’s also not forget about the 49th pick in the 2020 NFL draft, Chase Claypool. He is a 6’4”, 238-pound wide receiver that runs a 4.42 40 yard dash. Fantasy players are scared of the injury and lousy point production last season for Roethlisberger, but with all of the size and talent surrounding him this season, I can conclude that he will be a great late-round quarterback to pick up with his potential of mid to low QB1 numbers.

Next is Phillip Rivers. Once again, we have a quarterback that is nearing the end of his career. Nevertheless, Rivers is still out there slinging it. If you take a deep dive into his career numbers, he has an average of 4,086 passing yards and 30 touchdowns through his career, when he starts 16 games.

Rivers has been a top 15 quarterback in fantasy since 2013. He is also a quarterback who plays through his injuries, which is what any fantasy owner wants when drafting players.

Rivers is now with the Indianapolis Colts. He may not have the receiver talent that he had in Los Angeles, but he does have T.Y. Hilton, who can have 80+ receptions and 1,200 yards when healthy.

Rivers now has a plethora of wide receivers that come with size. The draft also brought the team a running back, Jonathan Taylor, that should have people interested. In college last season, Taylor had 26 receptions and 252 yards. In my opinion, this can only mean one thing, Rivers with the dump-offs.

Rivers is going to have the best offensive line he has ever had in his career. That will only give him more time to receive a better completion rate this season. Rivers will be available later in drafts, and could have the production to give mid to low QB1 numbers.

Matt Ryan, aka “MR 4000”, is in line to break the all-time passing record depending on the length of his career.

Ryan has thrown for 4,000 yards every season since 2010. He has a career passing yard average of 4,607 and 29 touchdowns. Numbers like that alone are enough to make him a top quarterback option.

The Atlanta Falcons brought in Todd Gurley, who has 218 receptions and 2,090 yards in 5 seasons. They also have Hayden Hurst, a 2018 1st round draft pick, who still had 43 receptions and 512 yards in a crowded tight end room.

To conclude for Ryan, he has been throwing for over 600 attempts for the past 2 seasons, which is already intriguing by itself. He will be around later in drafts, with the ability to have QB1 numbers.