Hit enter to search or ESC to close
NFLPlayer Profile 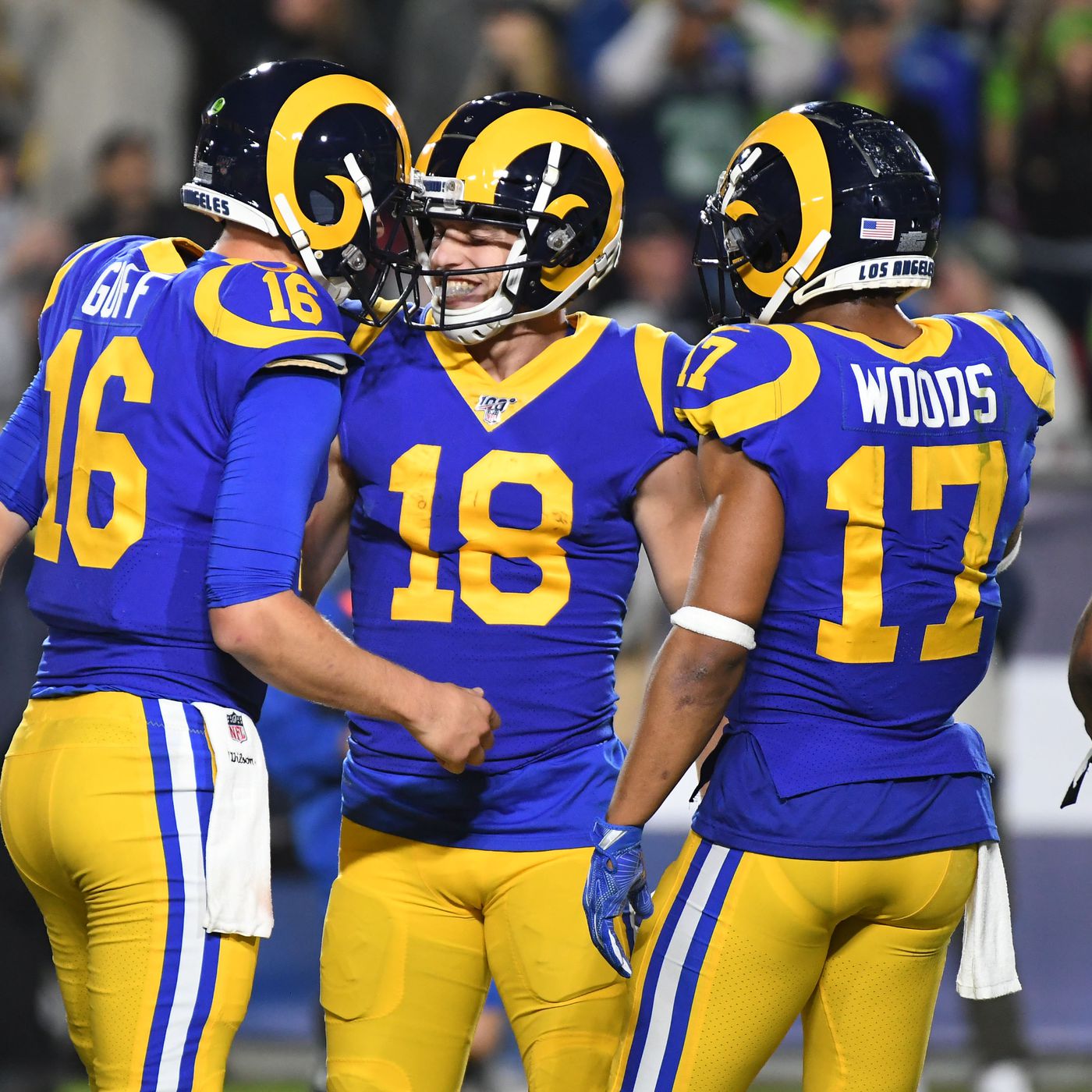 Training camp battles are what starts the fantasy cogs turning, here we focus on the battle for LA. The next few months will consist of 32 training camps as we have never seen before, and I am sure the players will echo those thoughts.

By far, the team I had the most questions about was the Los Angeles Rams. One half of this season’s Hard Knocks series is an offense on the whole who has the majority of the fantasy community up in arms.

This is because they introduced a ’12’ personnel towards the end of last season. Meaning that there are two tight ends in the grouping of players for an offense.

As you can see from the chart below courtesy of Sharp Football Stats, 30% of the Rams snaps from Week 10-17 were in this ‘12’ personnel. This was the fourth highest in the league over that period.

This led to the emergence of players like Tyler Higbee and saw others take more of a backseat.

So, will this type of personnel continue to be a prevalent factor and who should be targeting in drafts?

The hiring of Kevin O’Connell as offensive coordinator for the Rams in 2020 is a factor no one has spoken about. O’Connell will be coaching Goff in seeing the whole field a bit better, therefore improving his play as a QB overall.

For instance, O’Connell’s work on Dwayne Haskins in 2019 is a clear example of this. We saw Haskins get better game-by-game once he was the starter. He was able to lead Washington to some impressive offensive performances after a shaky start to the season

Subsequently, the improvement of Goff as an analyser of the field will be a promising sign to all pieces of this offense.

O’Connell’s comments about personnel particularly caught my eye. When speaking about rookie tight end Brycen Hopkins, O’Connell mentioned the idea of lining with four tight ends in formations. Meaning as a result having Hundt and Hopkins blocking with Everett and Higbee as receiving options.

Those comments are of course to throw off teams but are still interesting, to say the least. Even just to the extent that they are considering this possibility.

To clarify, McVay will still be calling the plays but O’Connell will be installing the gameplans and is in charge of player development. Which with this roster is crucial.

No Todd Gurley in LA anyone opens up the starting role to rookie Cam Akers coming in from Florida State and ever-present Darrell Henderson, who disappointed last season.

Firstly with Akers, the pass-catching running back represents a back that does have workhorse tendencies. At 5’10” and 217 pounds, I would guess that the Rams organisation hope that Akers can grow into this workhorse role over time, if not right away.

Akers offensive line situation in LA may be very similar to the one he saw at Florida State, who was one of the worst offensive lines in all college football. Akers still produced behind this line, going for 5.2 scrimmage yards per play alongside 18 touchdowns.

The Rams expect their offensive line to improve after last season’s efforts, but that is hard to envision and the drafting of Akers, a player who has produced in this exact situation says to me that the organisation are struggling to envision this also.

Secondly, Henderson could not see a solid workload despite Gurley’s knee issues last season. Therefore, this says it all about his outlook heading into 2020.

Similarly to Justin Jackson on the other team in LA, Henderson’s role this year will be as a change of pace back, perhaps on third downs.

If Henderson fails to make the most of his opportunities, then Malcolm Brown may jump him in the depth chart.

In conclusion, the starting role is Akers to lose at this point.

Whether to draft Cooper Kupp or Robert Woods has been a popular topic this offseason. The argument I am going to present to you is that both are draft worthy in 2020 at their respective ADPs.

The drafting of Van Jefferson this summer should mean that Cooper Kupp will return to his familiar slot role more often than not, which has seen him become so prevalent as a fantasy asset.

This will especially be the case when LA line up in ‘11’ personnel, which was for 67% of their offensive snaps from Weeks 10-17 last season when the ’12’ personnel became a bit more relevant.

This is because Jefferson will likely take up that outside spot opposite of Robert Woods to be a big-body option for Goff.

Kupp in Weeks 1-8 last season averaged out 99 receiving yards, putting him there as the PPR WR3, from a points per game perspective. In this period, 80% of their snaps were in ‘11’ personnel, so we are talking a 13% overall snaps drop for Kupp overall if we take the 67% of snaps in ‘11’ personnel in Weeks 10-17.

Therefore, I do not feel the drop is that significant.

With Todd Gurley moving on to Atlanta, the amount of red-zone looks that have now opened up is eye-opening at 56 red zone opportunities. Even if Kupp only sees an extra 10-15 opportunities in the red-zone, which is very achievable, that could be the difference to Kupp being a WR1 in fantasy. Especially with Kupp’s efficiency in the red-zone which will be touched upon later.

When you look for consistency in fantasy football, not many players stand out more than Robert Woods. Woods was ninth among all WRs in targets and yards per game last season and the eighth-best WR in fantasy points since 2018. His drop rate is incredibly low over his career, under 1%.

Throughout the personnel changes, Woods was ever-present on the field. The lowest his snap count dropped from Weeks 10-17 when the ’12’ personnel was ever-present was 69.6% in Week 12. Other than that, Woods over 85% of snaps in all other weeks.

So, Woods is Mr Reliable.

People have been stating that Woods is due a fairly nice uptick in positive touchdown regression after only catching two passes in the endzone in 2019, but I do not necessarily agree with that.

Kupp has always been Goff’s go-to-man in the end-zone, converting 7 out of 13 red zone catches to touchdowns last year. Also Higbee, despite being inefficient in this area, took in 14 red-zone catches, only for the two touchdowns.

Despite the inefficiency on some parts, this does not leave a lot of room for Woods to fit in on these red-zone trips and this does limit Woods upside a bit, but not detrimentally.

With this LA offense, Goff and McVay know they have two receivers in the passing game who they can rely on in different areas of the field.

Woods is the guy they can rely on to drive the Rams up the field and could be a league winner in PPR leagues. Whereas Kupp is the guy in the red-zone, outlined by his efficiency there last season despite the personnel changes going on around him. He may see a decrease in his yardage, but the increase in red-zone counteracts that nicely.

If you want to play it safe, then I would lean to taking Woods in drafts. However, I do feel Kupp has a great upside and is a great option in bestball leagues and in leagues where you are chasing high-upside.

Both players for me have a great chance of finishing as WR1s in fantasy this year. With ADPs of WR13 for Kupp and WR21 for Woods according to 4for4, and I would not shy away from drafting either.

Described as the most polarising fantasy debate this offseason, Higbee v Everett has caused some stir.

When comparing Higbee and Everett, we come to these conclusions:

Of course, Everett’s Week Twelve injury had a play to part in Higbee breaking out. As we can see from this chart below, Higbee’s snaps skyrocketed Week Thirteen onwards however from Weeks Four-Seven, both tight ends were fairly even on snaps, especially Week Six and Seven.

Everett did get the better of Higbee over this period production-wise, most notably in Week Five against Seattle and Week Seven against Atlanta but as we discussed earlier, Higbee is ultimately more consistent and efficient with his production, which is so key at this position.

Outlook for 2020 and Beyond

I do think it is likely that the Rams will be trading Everett some point in the season. The drafting of and post-draft comments on rookie Hopkins only empathise this in my opinion. Everett has the athletic ability to see a starting tight end in the NFL, but the sail has shipped for this to be with the Rams.

We will see from Higbee what we saw towards the end of 2019, a prime passing target in one of the most high-powered passing offenses in this league. With a playstyle like Mark Andrews, but less athletic, Higbee will continue to make the most of his chances and prove valuable to your fantasy lineups, most likely as a fantasy TE1.

If Everett remains a Ram, his snap count may be limited significantly with only a 30% ’12’ personnel in 2019 for LA.

In short, it would not hurt to draft Everett as the current TE33 in case he does indeed get traded or benefits off an unfortunate injury, but for him beating out Higbee to the starting role is a no-go.