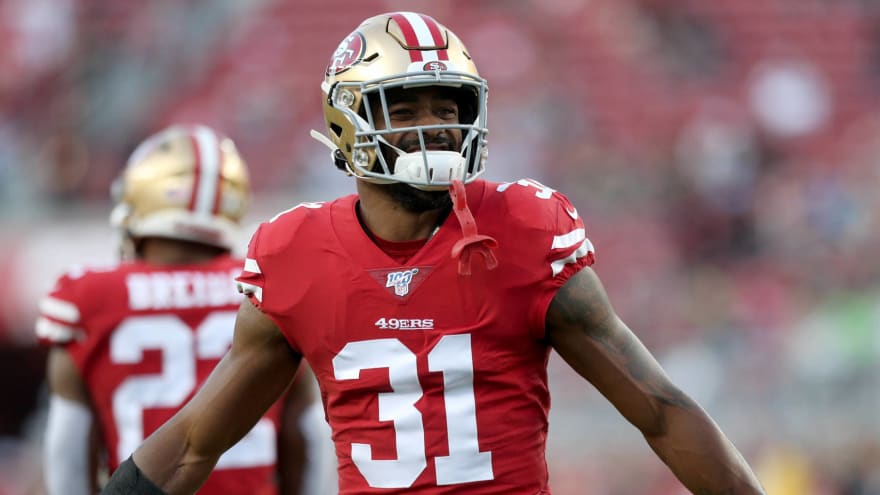 Training camp battles are what starts the fantasy cogs turning, here we focus on the battle in the bay. The next few months will consist of 32 training camps as we have never seen before, and I am sure the players will echo those thoughts.

Since the injury news of Deebo Samuel, and the trade request of Raheem Mostert surfaced, many people have been placing their flag on players receiving increased workloads, or productions based on this news.

Part of me thinks Mostert may be regretting submitting his trade request from the 49ers. Especially considering how he is now trying to smooth things over with the Niners hierarchy. Shanahan as a coach, at least in San Francisco has never been one to commit to having a bell-cow back. He likes to allow everyone a chance to impress, and at random times, then ride the hot-hand till they are not hot anymore.

As you can see from the chart above, from Weeks 5-12 last season, Mostert did not reach double-digit carries once then suddenly jumped up to 19 carries in Week 13, alongside his biggest season rushing yard-wise. So, who knows who the hot hand will be in 2020.

I guess that McKinnon and Coleman will not be these hot hands. Both have been on the offense for several years now. McKinnon’s recent NFL time has had injury trouble surrounding it, and a contract restructure means his guaranteed pay for 2020 has taken a significant cut. Coleman, on the other hand, has had his hot hand games last season, Week 8 and 19 in particular but has failed to land consistent production after that.

With Jeff Wilson Jr mostly used in the red-zone on occasion, we then turn to rookies JaMycal Hasty from Baylor and Salvon Ahmed from Washington.

Ahmed has shown more promise based on college production as a receiving back with his fifty career catches. Hasty, despite being underutilised at Baylor (465 snaps since 2016), could be that satellite back who has a Mostert-esque workload like we saw last season.

I would be acquiring Ahmed and Hasty at their current prices, which is nothing as it is a free hit which could return a league-winning upside.

Out of the receivers on this roster, I believe Aiyuk will benefit the most from this opportunity.

After being a secondary option to N’Keal Harry, Aiyuk burst onto the college scene last season, going for 1,192 yards and 8 touchdowns, whilst achieving a stand-out 18.3 yards per reception. With the 49ers investing first-round draft capital in Aiyuk, he was always in Shanahan’s plans, but maybe not as immediate as he will be now.

Aiyuk represents an explosive yards-after-catch machine who can offer Grappolo a quick short and immediate option on a whole range of plays from screens to run-pass-options. His ability to make men miss shown throughout college is vital to Aiyuk’s skillset considering his 4.50 40 yard dash time is average at best. His vertical and board jump is recognised as ‘elite’ and outlined his explosiveness.

Aiyuk’s current ADP of WR64 according to 4for4 is an absolute steal for the production he is likely to see from Week One when compared to rookies of Higgins and Mims being drafted around him.

Consider acquiring Aiyuk in PPR and bestball leagues as a late-round option who can do wonders when needed from your flex spots.

The lack of a preseason could hurt prospects like Hurd, a player who shone last preseason, taking in multiple touchdowns off a limited workload. After ending up on the IR for the whole of the 2019 season, Hurd may have to impress again in training camps to earn his way into a week-in, week-out role.

Operating predominantly from the slot, Hurd is a tough to take down running-back converted receiver, with his 6-foot-4 frame could be a nice long-term red-zone option once Kendrick Bourne is moved on in 2021, as he will an unrestricted free agent.

Hurd is on my watchlist for now but drafting him will come with further news based off the training camps.

But who do you think will win these training camp battles? Let us know what you agree and disagree on? You can find us on Twitter, Facebook and Instagram.