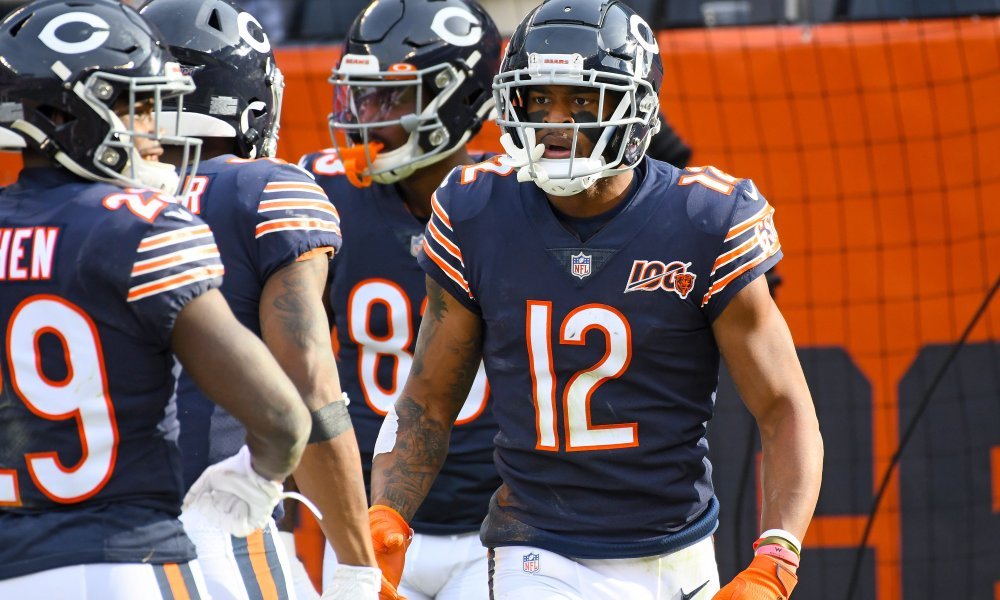 Over the coming weeks, I plan to do a breakdown of some players I aim to target in every draft in 2020 Fantasy Football, starting here with the wide receiver position.

For the avoidance of repetition, I shall leave out players like D.J. Chark, Randall Cobb and Preston Williams who profiles you can read about my clicking on the players’ names.

The 2019 season saw the true emergence of the WR1 that is Robinson II.

Firstly, this was a season where Robinson II commanded the third-most targets for his position with 154. That was bettered only by Julio Jones and, of course, Michael Thomas. That allowed Robinson to finish as the WR8, with 1,147 receiving yards and seven touchdowns. Robinson achieved all of that was with Mitch Turbisky throwing him the ball, which cannot go underestimated.

No matter how you look at the 2019 stats, Trubisky ranked bottom of the barrel on most key QB stats that mattered. Especially around completion percentages. Last when it came to adjusted completed percentage under pressure springs to mind.

In my opinion, you can also not underestimate the signing of Nick Foles for this offense, at least from a pass-catchers point of view. Foles is arguably the best QB Robinson has had in his NFL career, which this season will become seven years long.

Robinson throughout these last two seasons has only seen a 72% rate for targets that are deemed catchable which is atrocious in the grand scheme of things. If Foles can bump this figure by just 4-5%, Robinson could jump to the top 5 fantasy discussion for his position.

The way this offseason has panned out would suggest that Turbisky starts Week One for the Bears at QB. However, like as I’m expecting to happen in Las Vegas, with Carr and Mariota, Turbisky will have a short window to impress Nagy. And if not, then the job is Foles to lose.

Turning our focus back to Robinson II, Nagy made it a priority to deploy Robinson II in the slot in 2019. In fact, 41.1% of his routes run came from this exact part of the field. You know who also saw a lot of routes run from the slot, Chris Godwin and more importantly Michael Thomas, the defacto WR1 and WR2 respectively in 2019.

In addition, thanks to Nick’s tweet below, we can work out that 40.9% of Robinson II’s targets came from the slot, showing this slot role is a key element of this game. Oh, and also the fact that outside of the slot, Robinson II was third in the league with 29 deep targets.

Therefore, with Robinson being targeted in the short, immediate and deep game for Chicago, he is an X-factor on every down.

When looking at final numbers for 2020 on Robinson II, I am expecting him to clear the 100-reception mark that he came close to meeting in 2019 with Turbisky throwing him the ball. Other passing options like Anthony Miller and Tarik Cohen really do not scare me in the slightest in terms of taking volume from Robinson and Foles is an upgrade at the QB position, so the sooner he is introduced for this offense, the better. Getting a likely top 5 receiver at consensus WR12 is great value in drafts.

McLaurin is someone I have been targeting all offseason and if you are not already, then why not?

Throughout McLaurin’s 14-game rookie campaign, the Ohio State product put his name among elite talents. Based off Matt Harmon’s renowned Reception Perception, McLaurin ranked 4th among rookies for success rate v man coverage and 34th overall for WRs since the metric began in 2014 (notice how my boy Diontae Johnson is also in this tweet).

Consequently, this is pretty impressive for a player who at college failed to blow people away, seeing his highest yard total only reach 701 yards as a senior.

Can McLaurin be a No.1 receiver?

Although many people will say how McLaurin may see more No.1 cornerback coverage this year and the sophomore may struggle to cope with this. When I watch the film on McLaurin, I do not see or feel these concerns. Down below is film of McLaurin against one of the league’s best cornerbacks in Stephen Gilmore.

In particular from watching the full film how McLaurin snags some balls from contested situations. This makes a lot of sense when you see McLaurin had the highest contested catch rate at 68.4%, the highest in the league among his position.

So, McLaurin has the route-running tree to beat the best corners in the league but also the ability to catch the ball in tight situations, almost the perfect combination for an outside receiver.

Another question for people not buying into McLaurin is the QB play. Dwayne Haskins certainly divides opinion among fantasy players but for me, Haskins takes a step up in Year Two, like McLaurin.

As we discussed previously in the Training Camp Battles: Battle for LA article, Kevin O’Connell was improving Haskins as a QB towards the closing games of the regular season. His completion % as a passer continuously improved in the last five weeks.

When comparing this to McLaurin’s numbers, they more than often were reflected positively. This can only be a good sign for the pair, with the slight uptick in targets for McLaurin with Haskins as the starting QB compared to not (6.71 v 6.57). This is also the case when it comes to receptions (4.29 v 4) and receiving yards (65.86 v 65.43).

As a result, an minimal increase is shown in terms of production to McLaurin.

Therefore, with a lack of solidified draft capital acquired at the position this offseason, and the 23% target share last season, McLaurin is a true alpha WR1 in an improving offense. With a consensus ADP of WR25, he has tremendous upside and the sophomore can easily finish as a fantasy WR1 in 2020.

I think out of all the rookie wide receivers heading into this unique 2020 season, Reagor has the best chance of being a ‘league winner’ for your fantasy teams.

My definition of a ‘league winner’ is probably a bit different to most, as I like to focus on the playoffs, where the championships are won. These playoffs tend to start in Week Thirteen and run to the end of the regular season or in other words, Week Sixteen.

Specifically looking at stats from Sharp Football Stats, through those playoff weeks, the Eagles opponents ranked 7th easiest in passing efficiency defense and 10th easiest when it comes to general defensive efficiency.

Furthermore, if you want to narrow those numbers down even more to just Week Fifteen to Week Sixteen when your semi-finals and final matchups are likely to take place, the Eagles opponents rank 4th easiest in passing efficiency defense and 9th easiest in general defensive efficiency.

Anyway, enough about the Eagles opponents, what about Reagor himself? Well the rookie from TCU had a fairly underwhelming senior year, going for 611 yards and 5 touchdowns, off of a fairly successful sophomore campaign of over 1,000 yards and 9 touchdowns respectively. However, blaming these stats on Reagor alone would be harsh, to say the least, as the tweet below outlines.

As a result of watching the film on Reagor, he showcased a strong case of elite separation capabilities which will suit this Doug Pederson offense to a tee. The Eagles ranked 9th in pass attempts last season and Reagor’s QB, Carson Wentz ranked 10th in deep pass attempts last season so the combination of the two is almost meant to be and you can see why the Eagles spent first-round draft capital on him.

This makes even more sense when you look at the Eagles WR depth chart. With Alshon Jeffery and DeSean Jackson having continuous injury issues. With Goodwin now opting out of the 2020 season, they cannot rely on Greg Ward and JJ Arcega-Whiteside for another season.

So, with a clear path to be the team’s WR1 and Reagor joining an offense that suits his playstyle, a consensus ADP of WR50 is a huge value. For this reason, you can draft Reagor as your WR5 and have him as a very valuable flex play and as mentioned, a potential league winner.

Cephus is the wide receiver I have the most shares in so far in drafts. Mainly because I do not want to be squabbling over him on waivers come to the fantasy playoffs.

Path to being on the field

Firstly, with Gernomino Allison opting out of the 2020 season, Cephus has a clear path to the WR3 role on this Lions offense.

Secondly, Lions WR2, Marvin Jones Jr has had terrible luck with injuries in the past including back-to-back season-ending injuries. According to SportsInjuryPredictor.com, Jones Jr has a 86% chance of being injured again in 2020.

In summary for a late-round flyer, Cephus has a real chance to be a Perriman-like fantasy option for 2020. As a result, potentially advance you further to get your hands on that championship!

So, there are four wide receiver options for you! Who have we missed out? Let us know. You can find us on Twitter, Facebook and Instagram.