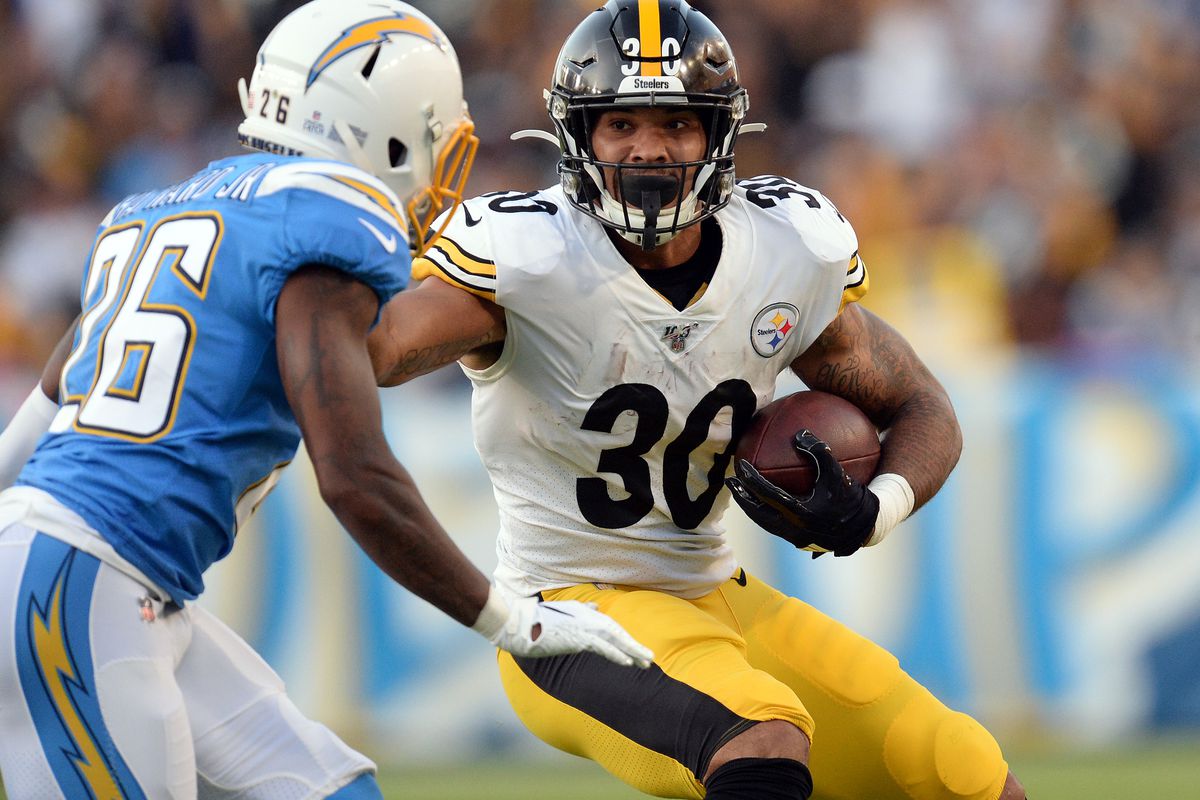 Finishing the 2018 season James Conner was a top 15 overall player in ADP. A young 24-year-old cornerstone to build around. He had performed fantastically whilst deputizing for Le’Veon Bell whilst he held out all season. Heading into the 2019 season he was the clear lead back in Pittsburgh.

Featuring in an offense that had produced a top 6 fantasy back for 6 consecutive seasons. The sky was very much the limit. However, 12 months later and he is currently the 65th overall player and RB27 in ADP.

There is no doubting Conner’s talent and his production when he was on the field. In 2018 he averaged 21.5 points per game with an overall RB6 finish despite only playing in 13 games.

Conner then started the 2019 season putting up an average of 17.8 points per game through 8 games. That good enough to be placed at RB9 at that point in the season. Then the injury bug hit again leading to Conner only seeing the field in spurts to end the season.

Reasons For His Decreased Value

The injury concern is the number 1 reason for Conner’s plummet in value. After battling Hodgkin’s lymphoma in college, Conner has been labelled a somewhat injury-prone player. He has missed time in every season of his NFL career to date. Quite rightly Conner is an injury risk and a concern to play all 16 games. However, in my opinion, the injury discounting has gone too far.

Additionally, the Steelers drafted Anthony McFarland in the 4th round of the draft which has reduced Conners value further. I see the McFarland drafting as reinforcing Conner’s role as the lead back. He should be instead competing with Benny Snell for the backup role. If they’d have spent day 1 or 2 draft capital then I’d have been worried.

If I am a true contender I feel extremely happy going into the season with Conner as my RB3. However, if I didn’t own him, I would consider looking to acquire him at his current value. He could get injured and provide you nothing but then so can any RB in Dynasty. If I’m going to take a swing at RB27 it might as well be for a player that has got true top 5 potential.

When the Texans traded away possibly the best receiver in the game for a RB Bill O’Brien rightly got destroyed in the media. But a lot of that hate was focused around David Johnson being washed up. Something that I’m not convinced was the case.

David Johnson has proved throughout his career that when he is healthy and on the field he is a truly elite player. He is capable of carrying a fantasy team due to his combinations in the rushing and passing game (RB9 in 2018, RB1 in 2016 and RB8 in 2015).

Prior to his injury in week 7 last year David Johnson was the RB5 overall, and he was having the start to the season many expected. He then injured his back and rushed back to try and play through it before Kenyan Drake took over. Never before have I seen the video of one play destroy a player’s value so quickly. As this Tweet discusses though he didn’t exactly have anywhere to go on said play:

Rather than focusing on his hot start to the season people instead focus on the negative when he was trying to play hurt.

Also it can be said Johnson is in an improved situation in terms of the run game. He will likely see more carries, the Texans offensive line is better than Arizona’s and he will have less competition in the shared backfield.

Johnson now looks to be fully healthy and looking like his old self in the videos coming out of the Texans camp. It’s hard not to expect him to at the very least return some solid RB2 value this year. As the RB28 and 68th overall, he is another win-now player that can be acquired on the cheap. At least, before the season begins and people realize the value he can return.

I love AJ green. Over the past 10 years he has been one of my favourite to watch. Now I’ve got that out of the way I can say that I think I may be the only person that saw the reports about small injuries to Green in the last week as a good thing. AJ Green was starting to creep up boards and his value was starting to increase. These latest injuries have once again tanked his value and he is back to being acquired on the cheap.

AJ Green is considered an old and past it player and part of that is down to him only playing in 9 games across the last two seasons. The team is completely different from when he last played. An upgrade at QB, coach and scheme since he last played. people are forgetting how dominant AJ green was as a player the last time he was on the field. In 2018 Green was 16th in Fantasy points per game and in 2017 he was 11th. AJ green has truly elite potential if he can stay healthy for this year.

His cost… he is currently the WR55 and will be acquired for a future 2nd. Again a big risk with the potential for injury. But if you can acquire him even cheaper due to the recent injury news, then I’d go out and buy now. Doing it before he returns to the field and shows everyone how great he is.

So that’s it! Our bounceback candidates. What do you think? Do you have these guys already? Or looking to acquire them? Let us know what you think! You can find us on Twitter, Facebook, and Instagram.