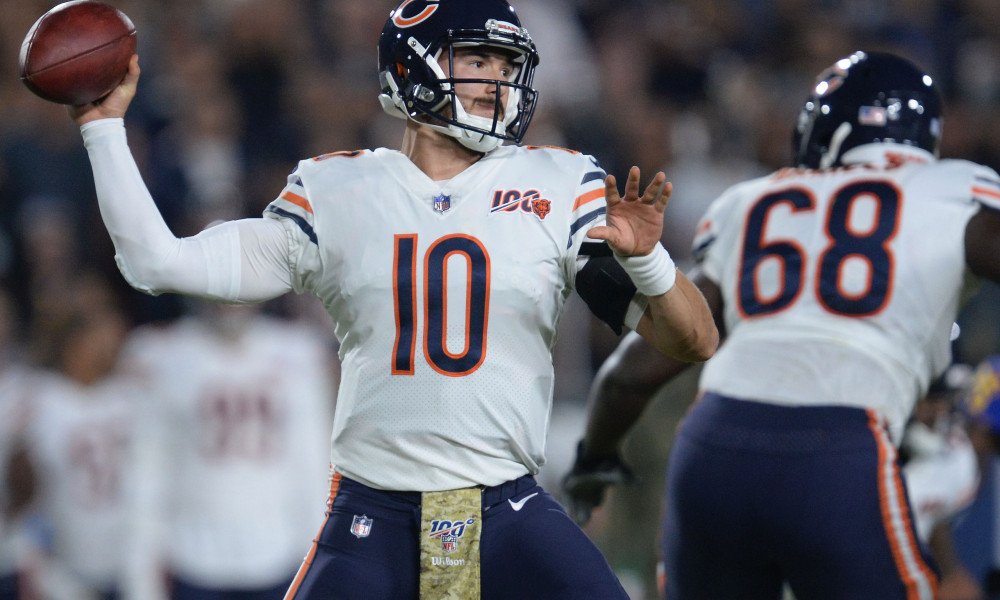 We are right on the edge of Week 3 action, after the laundry list of major injuries to stars in Week 2, many managers will be looking for some top fantasy streaming options. If you were unable to snag one of the top injury replacements though, this list of streamers will help you survive Week 3.

I’m going to drop the qualifications down even further to avoid overlapping with waiver wire targets. All streamers on this list will be rostered in less than 40 percent of ESPN fantasy leagues. The percentage noted next to player name, using a full PPR format for flex players. I’ve also avoided obvious waiver targets.

I expect Joe Burrow, Ryan Tannehill and Gardner Minshew II (only rostered in 24.9 percent) to be waiver candidates. But if not, snatch them up immediately. All three have been playing at the top of their game, with solid matchups against Philadelphia, Minnesota, and Miami (respectively).

With his career on the line, Mitch has been playing better than expected. The Chicago Bears franchise quarterback has burned me once or twice in the past- but I’m willing to let bygones be bygones and you should too. Trubisky is still a dual-threat (432 passing/42 rushing), and has thrown five touchdowns with for every two interceptions in 2020. He is also facing the Atlanta Falcons. The Falcons are ranked dead last in QB fantasy points against over the first two weeks after getting torched by Russell Wilson and Dak Prescott.

Dwayne Haskins Jr. also has a decent matchup, but I actually trust the wily gunslinger more for fantasy purposes. Fitz-magic is always a risk for interceptions, but when he’s on he has the ability to put up 20-plus points with ease. Infact, that’s something he did against a formidable Buffalo defense in Week 2! Now he faces a much more susceptible Jacksonville Jaguars secondary. In a really interesting Thursday night matchup with Minshew, this could become a shootout quickly. DeVante Parker and Mike Gesicki both finally seemed healthy this weekend, which also bodes well for the Miami Dolphins quarterback.

Again, there are some obvious waiver candidates this week. Like Carolina’s Mike Davis, or Devonta Freeman who just signed with the New York Giants to complement Dion Lewis. Jerrick McKinnon and Jeff Wilson Jr. (both SF) also make this list. But I’ll look a bit deeper than these popular injury replacements.

If you read my Week 2 Streamers article a short week ago, you might remember that I listed Kelley as an honorable mention. I didn’t love his matchup, but I noticed that the rookie was receiving a lot of important touches alongside teammate Austin Ekeler. It turns out that the Los Angeles Chargers actually doubled the UCLA product’s Week 1 workload in the overtime thriller against the Kansas City Chiefs (with 23 rushes), adding 49 yards receiving on his first two career receptions. However, his yards per carry dropped significantly. But, with a favorable matchup, against the NFL’s lowest-ranked run defense (Carolina), Kelley becomes the perfect upside stream again in Week 3.

In a shocking and frustrating turn of events for most fantasy managers, Myles Gaskin has seemingly beat out both Matt Breida and Jordan Howard for the starting RB duties in Miami. As mentioned above, the Dolphins will play the Jaguars on Thursday Night Football, and I wouldn’t expect too much defense from these two Florida franchises. Gaskin is only averaging 43 yards on the ground per game in his first two weeks. But, he has also been prevalent in the passing game with 62 yards on 10 receptions already. In PPR formats, this gives the former seventh round pick streamer value this week.

Even more injuries have occurred at wide receiver in the opening weeks. Although some have been deemed less serious than others. For example, Green Bay’s Davante Adams and his hamstring, or Chris Godwin who should return after a one-game absence from Tampa Bay. Courtland Sutton (DEN) and Parris Campbell (IND) were the newest wide-outs to hit the IR, the former will be on it for the long haul. Number ones like Michael Thomas (NO) and Breshad Perriman/Jamison Crowder (NYJ) are also in doubt. With all that in mind, let’s take a look at the top WR Week 3 Streamers, along with some fliers that might be worth a shot in deeper formats.

The former New Orleans Saints’ number two retook his role in the offense with Michael Thomas out Week 2. I wasn’t sure who might benefit more from the Thomas injury, Tre’Quan Smith or Emmanuel Sanders. But so far it’s been Smith. With Sanders getting the top coverage looks from the Raiders’ defense, Smith amounted 86 yards off seven targets, and the Saints next opponent could work in his favor again. The Packers secondary has a clear top corner in Jaire Alexander. If he shadows Sanders, like expected, Smith could be a repeat streaming success assuming Thomas doesn’t play.

The rookie has carved out a consistent role in this new Jags offense under Jay Gruden. Shenault plays mostly as a “flex back” that starts behind the line of scrimmage, being utilized as both a wide receiver and a running back. It’s almost how fantasy managers expected Washington to use rookie Antonio Gibson. Only Shenault has actually done it two weeks straight. With eight touches in Week 2, and playmaking ability any time he gets his hands on the football, Shenault may turn into a weekly fantasy threat. But for now at least, a matchup against the Miami Dolphins defense will do.

With Indianapolis Colts’ slot Parris Campbell now out for at least three to four weeks, and tight end Jack Doyle dealing with injury, a role has finally emerged for the second round draft pick Pittman. Zach Pascal is also in line for extra looks behind T.Y. Hilton, but Pittman outplayed Pascal last week against the Vikings, with four catches on six targets. The New York Jets secondary has been shaky at best, so expect either Pittman or Pascal to step up and produce in Week 3.

The New England Patriots’ former first round pick showed promising chemistry with Cam Newton (8 for 72, 12 targets) against Seattle, but he is above my 40 percent threshold, rostered in 45.4 percent on ESPN. Great streamer value against the Las Vegas Raiders’ secondary if available though. Also LOVE Corey Davis against Minnesota (46.5 percent rostered).

The big fantasy streamers at tight end in Week 2 ended up being injury fill-ins Jordan Reed (SF) and Dalton Schultz (DAL). Schultz should be a guaranteed waiver target already with Blake Jarwin done for the season, but Reed’s long-term outlook is less favorable if George Kittle returns. Logan Thomas (WAS, 15.9%) is another popular name right now, but I mentioned him as a streamer last week so won’t go into detail on him again (even though he has a prime matchup against Cleveland). Here are some other possible Week 3 streamers at TE, besides the names above.

With C.J. Uzomah on IR, Sample has already begun to stand out as a tight end with some serious receiving prowess. As a safety net for Joe Burrow and the pass-first Cincinnati Bengals, Sample had seven catches on nine targets against the Browns (not to mention one impressive one-handed grab). The Philadelphia Eagles rank 27th against tight ends through two weeks, making Sample a definite streamer candidate that should be available in most leagues.

There’s a good chance that Jack Doyle misses at least one more game, and the Jets got killed by TE Jordan Reed on Sunday. That sets up Mo Allie-Cox to have another big effort (he had 131 yards receiving on seven catches and eight targets in Week 2) with the Colts at home against NYJ.

The Chargers looked phenomenal against Patrick Mahomes on Sunday, forcing overtime as this pass rush led by Joey Bosa and Melvin Ingram frustrated the former MVP. This also might be the best trio of CB’s in the entire league (Casey Hayward Jr., Chris Harris Jr., Desmond King), and a Carolina Panthers offense without Christian McCaffrey could be a complete dud. After all, Teddy Bridgewater threw two picks and was sacked five times by Tampa Bay this weekend.

Call me crazy but the Bengals defense may actually be a decent play in Week 3. This Eagles offense is so badly bruised and battered right now that they have struggled in both games to start the season, yielding the second most points for opposing fantasy D/ST’s. Under fire because of a wounded O-line, Carson Wentz has already thrown four interceptions, having been sacked eight times. Cincinnati has a strong defensive line that can frustrate Miles Sanders and force Wentz to throw, which could go poorly.

This offense has been putting up points with ease, and Week 3 against Dallas is a shootout waiting to happen. The only issue for Myers so far has been that Russell Wilson has actually been too efficient! He scores a touchdown almost every drive, which has preventing Myers from attempting many field goals. Either way, he’s perfect on kicks so far, and something has to give in the FG attempts department.

His questionable tag and hip issue make him less of a surefire streamer, but being that the Jags play Thursday, Lambo should be okay unless a kicker is signed in the next 24 hours. One of the more accurate kickers of the last five years, Lambo’s only 2020 concern was this offense, but so far it’s been great.

Matchup against the Patriots defense isn’t ideal, but I wanted to shout out Carlson who is the number one kicker in fantasy right now and only rostered in 3.3 percent of ESPN leagues.

That’s it for our fantasy streamers for week 3 come back next week for more! Remember, you can always reach out to us on social media with any questions we are on Twitter, Facebook, or Instagram. And don’t forget to check out our weekly rankings!