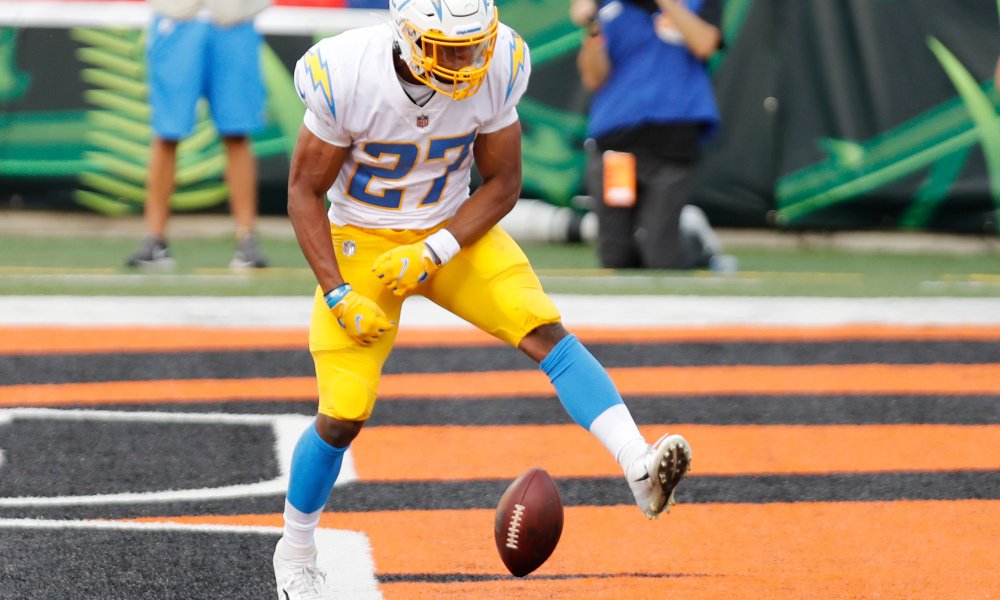 The 2020 NFL season is well and truly underway, meaning time for some DraftKings Week Three selections! The first few weeks have seen some great action on the field and some big scoring players. Hopefully, that continues for this week and beyond!

Throughout the season, I shall be providing players that I feel you should include in your lineups, with some rationale. So, let’s dig into whom I am thinking of slotting in my lineups for Week Three!

Paying up for the most expensive QB may not be the most appealing play to some when building lineups. However, the price points, among other positions, make this more than viable.

The matchup for Wilson is a very appealing one. Seattle host Dallas, who in Week Two gave up 35 fantasy points to the QB position, in their comeback victory against Atlanta.

In the first two weeks, Seattle has, as much as some hate this movement, #LetRussCook. Wilson has achieved a 140 passer rating through two weeks, alongside nine touchdowns and just one interception. All this makes him the fantasy QB1 so far in the season. This matchup against Dallas gives him a perfect chance to maintain this ranking.

Another premium-priced quarterback who appeals is Murray, who hosts Detroit. Mostly thanks to injury issues, this Detroit team have struggled to stop opposing offenses, especially quarterbacks. Detroit in the first two weeks have given 20+ fantasy points to Turbisky and Rodgers, and I would be surprised could not follow this trend.

With Murray throwing an interception in each of the first two weeks, you are not throwing Murray in your lineups for his passing upside. Instead, his rushing upside is what appeals the most. His 158 rushing yards and three rushing touchdowns over the first two weeks have seen Murray average 30.22 points via DraftKings scoring. Consider him in your lineups for Week Three.

If you are after a more budget-friendly option, look no further than Goff. The 2020 Los Angeles offense is the one we saw a lot of half in 2018, a play-action offense which marches down the field and has seen them start the season off unbeaten. Week Two saw Goff had that passing touchdown upside, scoring him 23.98 points via DraftKings scoring.

Los Angeles travel to Buffalo in Week Three, who despite being unbeaten themselves, have not been convincing defensively in either performance. Buffalo’s Week Two win over Miami saw them give up 28 fantasy points to Fitzpatrick, who as a whole offense, have not looked convincing. I would be surprised if Goff could not continue to keep this offense rolling on the road for a second consecutive week.

In the Week Two DraftKings article, we spoke about how Jonathan Taylor was one of the best values on the slate. The result for Taylor was a twenty-eight touch performance, with 110 total yards and two touchdowns.

Taylor’s Week Three price is not only too low, making him very much a ‘chalk’ play in Week Three, but also for the number of touches he will get, especially against this New York defense. To the run-heavy San Francisco in Week Two, New York gave up thirty-four fantasy points off of twenty-seven touches with multiple backs in Mostert and McKinnon achieving double-digit fantasy performances.

If Taylor maintains this touch rate as a starter, he should be able to at a minimum achieve his Week Two score of 22 DraftKings points in your lineups.

Sanders’ Week Two performance would make you think he never missed Week One at all. His twenty-three touch performance saw Sanders generate 21.1 DraftKings points, which for his price point in Week Two at $6,000 was a decent return.

Philadelphia host a Cincinnati team in Week Three. Through the first two weeks of the season so far, Cincinnati has given 33 points on average to the running back position, with the Browns running backs a massive forty-seven-point performance on Thursday Night Football in Week Two. Only Carolina is worse at the position.

With Sanders likely to maintain this rate of touches in Week Three, he looks to be a lock-in most of my lineups for Week Three.

A lot of people may look to target Austin Ekeler ($6,800) from the Chargers backfield in Week Three. However, I am looking to go in the opposite direction with Kelley at his price point.

As referred to earlier in this segment, Carolina rank as the worst team at defending running backs, giving up an average of thirty-six fantasy points through the first two weeks. If you read my offseason content, you would not have been surprised by Kelley taking over the No.2 role in Los Angeles over Justin Jackson. Kelley rubber-stamped his mark on this role with 25 touches, going for 113 total yards.

I am not saying he will maintain this 25 touch volume. However, a 15+ touch game is more than fair to expect and to get that from your FLEX spot is excellent value in all of your lineups.

To get 60+ plus touches from your two starting running backs and your FLEX spot is a great start to a winning lineup. This is because you are maximising your chances for points scoring with every extra touch.

Offering you a lovely stack option in your lineups this week with Wilson is Metcalf, who has impressed in the opening weeks of the season.

Both star Seattle receivers have seen plenty of production in their 1A/1B system, but Metcalf has seemed to have that more touchdown-upside, demonstrated by his touchdown in each of the first two games of the season.

Seattle host Dallas, who so far in the season, have given up 28.8 fantasy points to the wide receiver position. I would be surprised if they managed to fix their issues for this week, hence why Metcalf should be a key consideration for your lineups.

After a rocky Week One, we saw McLaurin come to life in the loss to Arizona in Week Two. His 7-125-1 performance saw him put 28.5 DraftKings points, which was a vast improvement on his 11.5 point Week One performance.

McLaurin and Washington now travel to Ohio and Cleveland specifically. Cleveland, through the first two weeks, has given up 27 and 28 fantasy points to the wide receiver position. Of course, this bodes well for McLaurin and Co., so long as Haskins can get them the ball efficiently enough like he did last week for the most part.

We spoke in the Week Two Selections article how Lamb was apart of an offense who can put up plenty of points. That is what happened last week.

Lamb gave my main slate lineup 20.5 points from the WR3 spot, seeing me win several cash game competitions. Therefore, Lamb’s price has been awarded a bump, but not enough, in my opinion.

Dallas, as you know by now, travel to Seattle who is a team who have allowed an average of 42 fantasy points over the first two weeks. Also, Marquise Blair has just been ruled out for the season, making this secondary even weaker. On Sunday Night Football, we saw Edelman have a career game yardage wise and with Lamb operating in the same part of the field, I would expect another big performance from the rookie.

For a super-budget WR3 play, I love the look of Humphries for Week Three. There is still a lot of cloudiness around A.J. Brown’s health heading into the match against Minnesota and Humphries and a strong game minus Brown. A touchdown boosted his 15.8 point performance via DraftKings scoring in Week Two.

With Minnesota’s secondary starting mostly rookies, who are still adapting to the NFL, the point potential for opposing offenses is vast. The average of 36 fantasy points for wide receivers facing Minnesota is the second-highest in the league. With Brown looking unlikely to play in Week Three, Humphries could easily have a 15+ point performance in Week Three and be that slate-breaker in your lineups.

There is only tight end play I love this week, and it is one of the options I liked last week in Thomas.

If luck does exist in DFS, I do not feel we got any with Thomas against Arizona. Thomas’ 100% snap share resulted in nine targets in Week Two, including two in the red zone. However, this only resulted in 26 yards and zero touchdowns. Thomas also has an average 27% target share, which was the same as McLaurin when you spread the games over the two weeks that have passed.

Week Three feels like a second chance for Thomas, and my selection of him in this article! Cleveland, alongside Philidelphia, have given up the most fantasy points to tight ends in the first two weeks of the season, at 16. Getting the effective second receiving option for Washington at such a low price again is too good to turn down in my lineups at least.

Thomas is very much the case of ‘fool me once, shame on you; fool me twice, shame on me’.

Like the first two weeks of the season, paying up for a premium D/ST has proven to be worth it, if the right one is selected. The offenses in 2020 have been scoring points at a record pace (since 2006), therefore just throwing in a cheap option is not optimal in my opinion. For the third week in a row, I feel this to be the case.

Tampa Bay face Denver in Week Three, with both Drew Lock and Courtland Sutton ruled out indefinitely. Their fourteen-point performance in Week Two versus Carolina. Five sacks and two interceptions mostly generated this. The Denver offensive line has already allowed seven sacks through two weeks. Also, the Broncos now have Jeff Driskel at quarterback. Driskel has thrown five interceptions in his last four games, including one last week against Pittsburgh.

Like in Week Two with Pittsburgh against this same offense, the opportunity for points is there, which once again is worth the premium in my eyes.

If you fancy a more mid-tier defense that could still provide excellent point value, then Los Angeles is your best bet. As mentioned previously, they travel to Buffalo and take on Josh Allen. The Los Angeles secondary have impressed so far, keeping wide receiver groups like Dallas to under two hundred yards and most notably zero touchdowns. The same touchdown-wise can be said for both teams also.

Whilst Josh Allen has looked impressive in the first two weeks; he has faced poor defenses in New York and Miami. Los Angeles will be his first real challenge of a defense to come up against, with playmakers all over the field.

I bet that Allen does not have as easy of a time as he has the past two weeks, hence why you should consider Los Angeles in your lineups.

NFL 2020: DraftKings Week Three Selections – My lineup as it stands

So, there are our DraftKings selections for Week Three of the NFL 2020 season! Who have we missed out? You can find us on Twitter, Facebook, or Instagram.