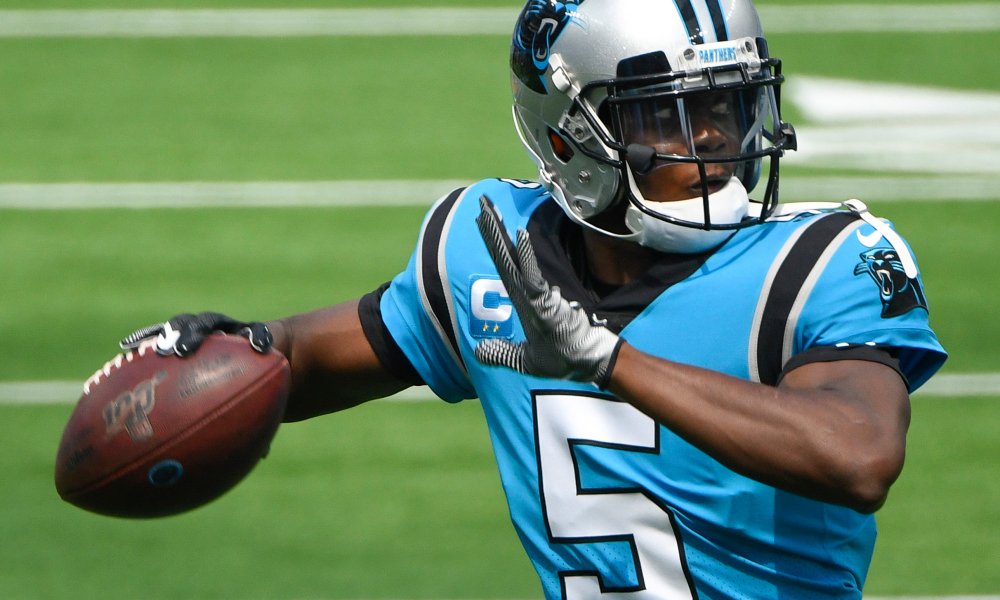 Along with Week 5 comes our first (non-COVID related) bye week, meaning you might need some streamers for your fantasy lineups. The teams on bye this week are:

Those two byes, plus the insane amount of key injuries in 2020, are enough to have managers searching for streaming options.

Well have no fear, because I got you covered with my weekly fantasy streamers spot. As always, I will try and look past most obvious waiver candidates. Targeting Week 5 Streamers that are available in less than 40 percent of all ESPN leagues, based on their matchups and upside potential in deeper PPR formats.

Tons of options this week, so I’ll tell you which available quarterbacks to target, and which to avoid altogether.

Bridgewater has looked really comfortable in this offense the last two weeks, leading the Panthers to wins against the Chargers and Cardinals. Now he’s up against a pathetic Atlanta defense (ranked 32nd against QB’s) in Week 5.

He’s developed a tremendous rapport with Robby Anderson through four weeks. However, he has also found ways to get the other pieces on offense involved. D.J. Moore, Curtis Samuel, Seth Roberts, Mike Davis, and Reggie Bonnafon have all performed nicely with Christian McCaffrey absent. This could be a really productive unit once McCaffrey is back. Teddy has completed over 70 percent of passes his last three games. The quarterback had 300-plus total yards, with three touchdowns, in Week 4.

You might be noticing a common theme here, as my number one QB stream in Week 4 was playing the Dallas Cowboys. They can’t guard anyone right now, as the NFL’s worst ranked defense (they are actually historically poor). If you were waiting for the week “Danny Dimes” finally breaks out in fantasy, THIS IS IT.

Baker Mayfield had a decent game against Dallas last week. But his fantasy explosion was hindered by the fact that the Browns rushed for three touchdowns, and wide receiver Jarvis Landry threw one himself.

The Giants offense is much more reliant on their quarterback, especially since Saquon Barkley is done for the season. There is no doubt Jones will be asked to air the ball out against the rival Cowboys; the season is on the line for the G-Men after all, and they really have nothing to lose against Dallas.

The rookie is just plain good. He plays with a smoothness about his game that you usually don’t see this early in a quarterback’s development. Last week he went toe-to-toe with Tom Brady, and a fearsome Bucs defense that blitzes a ton. He managed to put up solid points yet again. If not for a late Hail Mary interception, he would have finished in the high-20’s. Now he’ll play against a sub-par Saints defense in a pass-friendly dome.

I don’t like Cousins as much as the three above (if you have the choice), but Seattle’s pass defense is porous, and possibly without Jamal Adams for the second straight week. Cousins is starting to build chemistry with rookie Justin Jefferson, which will help take some pressure off Adam Thielen, and Kirk.

This is a rush-first offense despite the matchup, and Rivers is running out of wide receivers to throw the ball to.

If Jimmy G does return, you would be smart to avoid him. This Dolphins defense is better than the rankings show, and Garoppolo might not be 100 percent.

Chase Edmonds (ARI), Damien Harris (NE), and Justin Jackson (LAC) come to mind as clear waiver candidates here. So if they are available, use them. But I won’t highlight them in this streamers article. Here are some streamer candidates for Week 5 that won’t be in such high demand.

Duke Johnson has yet to get going in 2020. Losing out to David Johnson out of the gates, before falling victim to a Week 1 injury. He returned to action last week but was still wasted in Bill O’Brien’s offense. Well, O’Brien has finally been fired. I also like Duke’s matchup as a pass-catching back against the Jaguars (Myles Jack injured).

David Johnsons’s production has gotten worse and worse since Week 1. So, perhaps the coaching change will be the stroke of good fortune that the Texans backup needs to get his season going.

The Panthers run defense managed to stifle Kenyan Drake last week, but they are still ranked 31st on the season. Todd Gurley is still the lead back in Atlanta, but Hill gets six to 10 touches every game. He could easily break one or two loose against Carolina like he did in Week 3.

Everyone has been talking about Mike Davis as McCaffrey’s main replacement. But Reggie Bonnafon also handled a large portion of the job. Last week he had 10 carries for 53 yards, plus two receptions for 18 yards and a touchdown.

Unfortunately, Bonnafon suffered a high ankle sprain during the Week 4 victory, so that leaves Davis and Trenton Cannon. This is a definite risk, but if Cannon can step into Bonnafon’s relief role, he might be a surprisingly good Week 5 stream that’s definitely available.

Head Coach Kyle Shanahan is starting to involve the rookie Aiyuk in this offense. Force-feeding him touches the same way he gave Deebo Samuel an opportunity in 2019.

If Mostert returns, it could dampen this play a tad with Samuel and Kittle also back. But expect Shanahan to be itching at the opportunity to utilize his entire arsenal at once against Miami, Aiyuk included.

I know I was just going on about how Rivers and the Colts may not throw the ball much. But that matters much more for a QB’s numbers than a wide receivers.

All Pascal needs is a couple plus-catches, which he had in Week 4 (three for 58, eight targets). With Parris Campbell and Michael Pittman Jr. out, it’ll make a solid stream for the Colts starter.

Agholor has been starting in place of the injured rookies, Henry Ruggs III and Bryan Edwards, and doing pretty well in the process. He had a touchdown on four receptions in Week 4, and this matchup against Kansas City is much easier on wide-outs than the Buffalo Bills secondary. If Ruggs and Edwards play, stay away. But if they’re out again, Agholor becomes the player with the most potential.

Ford had 10 targets last week, and has become a big part of this Dolphins offense that likes to sling the ball around. The Niners D is still tough, even with all the injuries, but they aren’t particularly strong at nickel corner.

Not the first time I’ve listed the rookie Mooney. He’s been a pleasant surprise for this Bears unit so far, and a favorite of Head Coach Matt Nagy. Mooney has the second most wide receiver snaps on Chicago in 2020, behind Allen Robinson, but the early Thursday game limits his flexibility.

If Julio doesn’t play in Week 5, stream Zaccheaus, who had eight catches for 86 yards in Week 4 (after Jones left with injury).

Godwin should be out again, so look for Justin Watson to start on the outside across from Mike Evans.

Before the Covid cancelation, Ebron was really starting to get something going with his new QB, Ben Roethlisberger. I had him listed as a streamer against Tennessee so long as the game wasn’t postponed, but since it was, let’s call Ebron out for an encore. He has an even better matchup in Week 5, against an Eagles defense that is ranked 30th against tight ends. This is the type of stream that could work long-term too, as Ebron was once a top fantasy tight end just a couple seasons ago.

Another name I keep mentioning weekly, yet he’s still available in a large percentage of leagues. Alie-Cox has become the red zone guy for Philip Rivers (his new Antonio Gates, minus the Hall of Fame plaque). He has surpassed both Jack Doyle and Trey Burton in a receiving capacity. The Browns are also ranked 29th against the tight end position.

With O.J. Howard out long-term and the Bucs offensive weapons reeling with injuries, Cameron Brate finally stepped into a more important role in the Week 4 comeback win. It’s the Thursday night game, so it’s more or less a leap of faith, but Brate is the type of player that usually succeeds in Brady-led offenses (touchdown last week).

I don’t recommend this. But if you really need a D/ST this week (that’s available in less than 40 percent of leagues), I would have to go with the Washington Football Team.

Team D is at a premium this season, with offensive production way up all around the NFL. I’m really thankful that I didn’t go with the weekly D/ST strategy in any of my leagues this year because it’s a straight-up minefield right now.

I’m nervous about Washington’s offense moving the ball, but I’m still not sold on this Rams offensive line. I feel Washington’s dynamic pass rushers could cause problems for Jared Goff if the run game falters.

LA’s offense was average against the Giants D at home last week, and this game is on the road against a much tougher Washington unit that has performed admirably so far (11th in points for all D/ST’s). Give me the Football Team this week in a shocker.

This Houston offense is good enough to get into field goal range most possessions, mostly because of Deshaun Watson. However, it has not been efficient enough at scoring touchdowns.

That’s always a great sign for kickers in fantasy, and Fairbairn was perfect on chances last week in his second double-digit performance of the year. The Jags D isn’t their strength, so expect Fairbairn to get a lot of opportunities again in Week 5.

I picked Slye last week as well, but the Panthers offense was actually too proficient to yield huge kicker points. This is my only worry again as a matchup with the Falcons is on the horizon.

However, I’ll always bet on a kicker who’s offense should score a large total, and I believe Carolina will do that this week against Atlanta.

That’s it for our fantasy streamers for Week 5 come back next week for more! Remember, you can always reach out to us on social media with any questions we are on Twitter, Facebook, or Instagram. And don’t forget to check out our weekly rankings!