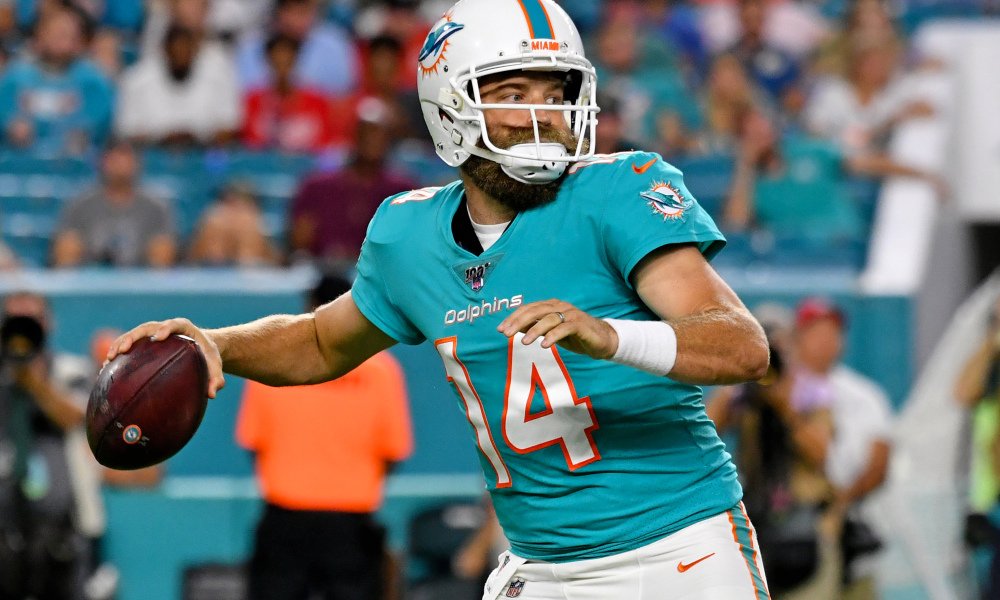 Well, as has happened so far in 2020, Week 6 brought more injuries to consider for your waiver wire adds! There is of course COVID issues everywhere, with the league working out a bunch of schedule changes last night. However, the headline news will be around Dak Prescott and his ankle, with him now missing the rest of the season.

Each week I am going to look at players to use that have lower ownership percentages (lower than 50%). I’m going to be using the rostered percentages from Yahoo leagues, as it’s easily publically available. These are players that I’m looking to pick up from the waiver wire for Week 6.

As we now enter in the world of bye weeks, be aware you need to fill players that are going to miss action this week. That means waiver wire adds might be more short-term than usual, teams on bye for Week 6 are:

Cousins didn’t have quite the performance that was expected in his matchup with Seattle. However, he has another great opportunity to put up some solid numbers against Atlanta this week. Atlanta is (to put it politely) awful. If you need a QB this week, you could do worse than Cousins.

Fitzpatrick did his thing. Against one of the toughest defenses in the league (yes, injury-hit but still). Week 6’s matchup has been adjusted to the New York Jets for Miami, meaning that Fitzpatrick should again have an opportunity to put up some solid numbers.

I don’t really want to talk about Dak Prescott’s injury, I just wish him the best. However, it does mean that the signing of Dalton as the backup now looks fantastic. Dalton steps into an offense that is absolutely loaded with weapons and is going to be desperate to make the playoffs. Dalton is an add for the season, rather than one week, but he should have solid low-end QB1 numbers for the season.

Jackson hasn’t played yet this week, so you might actually be able to pick up Jackson as a free agent at the moment. As I mentioned last week, Kelley has been the complimentary back for the team, but Jackson should still get touches. With the landscape of injuries, he is well worth a pickup.

Mattison will be the most popular add this week, with Dalvin Cook forced off the field with an injury. Cook should be undergoing an MRI later today to determine how bad the injury is. However, even if it is just one game (which seems unlikely) then Mattison is still a priority as the team’s workhorse.

Each week it feels I’m asked if Antonio Gibson will breakout. At this point, it feels like it’s not going to happen soon. The Washington Football Team mixed things up, with Kyle Allen taking the starting QB job before Alex Smith made an emotional return. That means that the offense could start to operate completely differently. However, for now, at least, McKissic seems to be the lead receiving back for the team.

I predicted that there would be at least one receiver would blow up in the first game without Bill O’Brien. Cooks stepped up to the task, with 161 yards and a TD. The offense seemed to take a step forward, and while it might be hard to predict, Cooks should be owned.

I said last week that you should add Kirk to your roster. Kirk returned to the fold, equalling DeAndre Hopkins in targets for the game. Next week brings the Cowboys defense, which feels like a must-target at this point.

The rookie can do it all, and has seen his role grow each week so far this season. Shenault has now recorded 12 receptions for 165 yards over the past two weeks. With a matchup against Detroit this week, he is worth an add.

After weeks of lacklustre performances, Williams reminded fantasy owners what he could do. Williams caught four passes for 106 yards and a TD, but more importantly, he looked healthy. With a matchup against the New York Jets next, it’s worth adding Williams now before he blows up again.

Claypool was the headline player this week after catching seven passes for 110 yards and 3TDs. Oh, as well as getting a two-yard TD run. Claypool could be inline for more work moving forwards as well, with Diontae Johnson exiting the game with a back injury. Johnson has looked great on the field, but it seems injuries are going to stop him getting on the field.

Jackson and Jeffery are riskier adds, as they both have injury worries. But if you are 0-5 and need to do something to shake up your roster, they could be the injection your season needs.

Graham is not the most exciting add. Infact, you might not even want to start him most weeks. However, he seems to be an important part of the Bears offense not. A matchup this week against Carolina isn’t bad, so he could fill-in for teams that have Darren Waller or Hunter Henry on bye this week.

Brate is going to have value in Tampa, with O.J. Howard out and Rob Gronkowski still used to block. Brate is pretty much TD or bust, but could see more targets in the offense if a combination of the team’s receivers are forced to miss more time.

The Green Bay Packers DST has performed well this season. Due in part to the ability of it’s offense to be effective. The team next face Tom Brady, who has looked inconsistent at the helm of the offense this season. The Packers also have a good matchup against Houston in Week 7, making them a multi-week option.

Washington were walked all over by the LA Rams in Week 5. However, Week 6 brings in the New York Giants and Daniel Jones. The Dallas Cowboys defense were able to get Daniel Jones to turn the ball over, despite him finding a way of getting the offense to move the ball. With both teams having a slow offense Washington are a decent add. They could even have value the week after if Dallas stall on offense.

Koo returned to the field, after missing Week 4 with injury, to hit all of his kicks against Carolina. Koo has now missed three kicks all season. The Falcons offense has started to struggle to score TDs, but that should mean opportunities for Koo to convert FGs.

Prater is likely only this low because he had his bye week last week. However, that’s a perfect reason to pick him up! Prater has missed two FG attempts, but converted all 10 of his PAT attempts so far this season. His matchups for the next three weeks should also give him an opportunity to kick plenty of goals.

So those are our waiver wire adds for Week 6. I’d certainly expect a number of them to end up in my start/ sit article later this week, and in my weekly rankings, which will be as soon as I take in the action tonight.