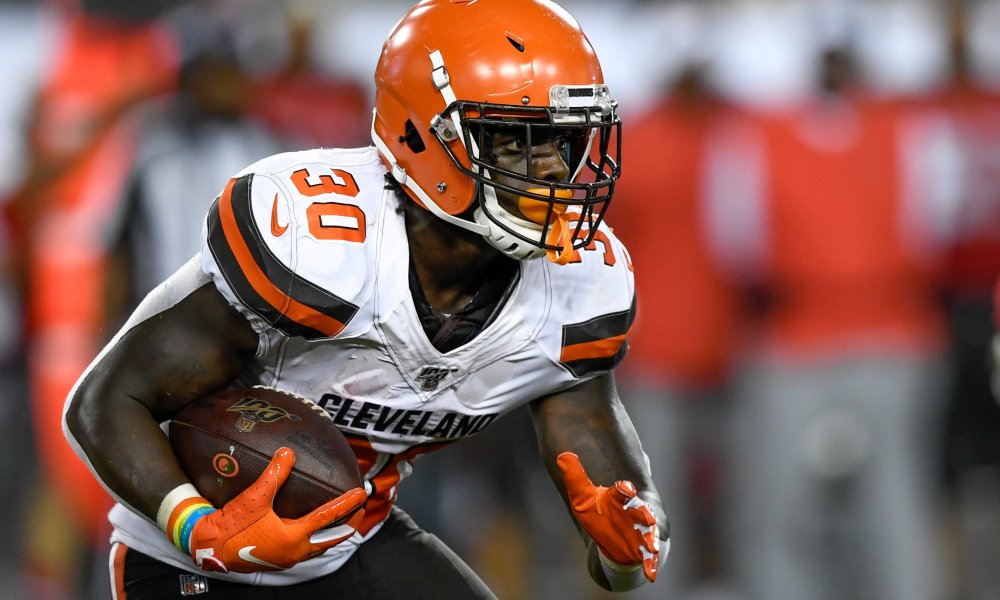 Well, as has happened so far in 2020, Week 7 brought more injuries to consider for your waiver wire adds! There is of course COVID issues everywhere, with the league working out a bunch of schedule changes last night. However, the headline news will be around Dak Prescott and his ankle, with him now missing the rest of the season.

Each week I am going to look at players to use that have lower ownership percentages (lower than 50%). I’m going to be using the rostered percentages from Yahoo leagues, as it’s easily publically available. These are players that I’m looking to pick up from the waiver wire for Week 7.

As we now enter in the world of bye weeks, be aware you need to fill players that are going to miss action this week. That means waiver wire adds might be more short-term than usual, teams on bye for Week 7 are:

Bridgewater struggled this weekend, which might help your claim for him this week. Chicago are now the best defense against QBs, and limited Bridgewater to 216 yards and two INTs. Carolina faces New Orleans next, a team that is one of the worst against the position this season.

We are yet to see how Dalton performs leading the Dallas offense after the injury to Dak Prescott. However, the surrounding weapons around him should be effective, and he should be a low-end QB1 or high-end QB2 most weeks as a result. In some leagues, he may even be a free agent as he hasn’t played this week.

Carr is a risky add, as he faces Tampa Bay after his bye week. That defense, unfortunately for me, made Aaron Rodgers look very normal. However, if you are in need for a bye-week fill-in then Carr could be it. If you are still worried, then reassure yourself that Carr has performed well against the effective pass defenses of New England Patriots and Kansas City Chiefs.

I mentioned it last week, but if you haven’t done it yet- pick up Jackson. This backfield when we last saw it was a committee, but crucially for PPR leagues, Jackson seems to be getting usage in the passing game. With a matchup against Jacksonville this week, he should be worth a flex.

Johnson was a hugely popular add when Nick Chubb went on IR. I said at the time to people that asked, don’t spend up in your league as he will be dropped by a lot of owners in the next few weeks. After facing two of the best rushing defenses, Cleveland face Cincinnati- which should be a far better matchup.

Scott is an add this week, after Miles Sanders left with a knee injury and didn’t return to the game. With the Eagles facing the New York Giants on Thursday, we could see the team bench Sanders and roll with Scott.

Edwards is worth picking up- especially if you are struggling at the position. There is risk with this one, because Mark Ingram could return from the bye without his ankle injury. However, if you were an owner that had Saquon Barkley and now have a hole at RB, it’s a risk worth taking.

Claypool followed up his smash performance last week with another great week. I’m mentioning Claypool likely for the last time here. Being honest, he is likely not available in your league, because you are probably in a competitive league and he was snapped up. But, if whatever reason he isn’t, grab him now.

Shenault might actually be available in more leagues after waivers have cleared. Shenault was targetted seven times, but was out-targetted by Keelan Cole and D.J. Chark. He equally struggled with those targets. I’m still happy to roster him, but owners in your league might think it’s a sign of things to come.

Arizona are yet to play, so this could end up looking like a terrible suggestion. However, Kirk has seen more targets since he returned from his injury. Moving forwards, I expect Kirk to be more involved in the offense.

WIlliams had a great performance in Week 5, but disappointed this week in a game he should have done well in. However, Joe Flacco and the New York Jets ended up imploding on offense, meaning Williams wasn’t overly needed. Williams now has a bye week, but he now looks healthy and could impress the week after against the Los Angeles Rams.

So, it turns out there is another player on the roster that can catch passes. Perriman finished his matchup with eight targets, catching four of them for 62 yards. While his production is tied to the return of Sam Darnold, he is worth an add in deep leagues.

Jackson and Jeffery are riskier adds, as they both have injury worries. But if you are 0-6 and need to do something to shake up your roster, they could be the injection your season needs.

Burton seems to have picked up where Mo Alie-Cox left off. Burton stepped up as the leading TE for the team, catching 4 passes for 58 yards and a TD, and rushing for another. The Colts have a bye week before they face another team, so maybe this is one for next week. But if you are a in a deep bench league, act now and don’t worry about the scramble next week.

I was done with Thomas. His targets were there, but he was doing nothing with them. Then, he has a decent matchup and I feel like I’m being pulled back in. Thomas might end up disappointing again, but I’m ready to be hurt again, especially with his matchup against Dallas this week.

Firkser is going to be the hot-add this week, after replacing Jonnu Smith (who suffered an ankle injury). Firkser picked up from Smith’s impressive performances, catching eight passes for 113 and a TD. The offense is run-first, but Firkser is a great streaming option for the season

The Eagles aren’t exactly the best defense in the league. However, they have still got a great defensive line that can get sacks, with 21 this season. A matchup against New York Giants and Daniel Jones is next, a team that don’t mind allowing teams to get sacks, as well as turning the ball over.

I was more positive about this selection last week than this week, but I’m still happy to roll with them. The Packers struggled against Tampa Bay, but have a great opportunity to bounce back against Houston. However, even if they don’t you’ve got a few weeks of decent matchups coming up.

Crosby is my favorite add, he has already had his bye week which is great. What is even better, is that he is yet to miss a single FG this season, and only missed one PAT this season.

Elliott is far more of a bye week plugin than Crosby and is more under the radar. Elliott is part of an Eagles offense that has been struggling this season, but the team has an opportunity against New York Giants this week in a must-win divisional game. Elliott should be able to beat his average of 5.5 points per game.

So those are our waiver wire adds for Week 7. I’d certainly expect a number of them to end up in my start/ sit article later this week, and in my weekly rankings, which will be as soon as I take in the action tonight.