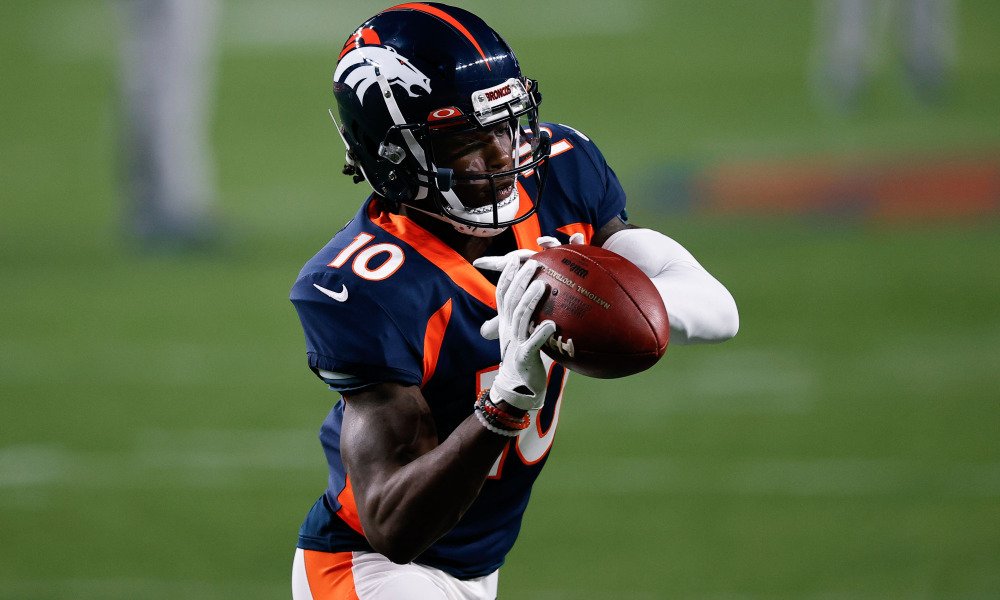 Welcome back to our weekly dynasty buy and sell column- here we are for week 9! For me, this is the most critical time of the year when it comes to the trade market.

If you’re a contender you can go out and acquire that one final piece that will enable you to bring home the title. And if you’re not a contender those fringe pieces are at their most valuable if you have multiple contenders vying for the players’ services.

If you are looking for a QB to tip you over the edge it’s hard to find a better option than Aaron Rodgers. Currently the QB7 on the season averaging 22.8 points per game, clearly elite production. But it is coming at a discount due to a combination of his age and the fact the Packers spent a 1st rounder on Jordan Love in the draft.

My advice when looking at Dynasty is to always operate in two to three-year windows yet the consensus, especially at QB, is to obsess over age rather than production.

In the latest DLF ADP Rodgers is going in the range of Baker Mayfield, Jared Goff and Daniel Jones. Although he has about 10 years on each of those, I’m not convinced the other three will have a starting job in two years time any more than I am that Rodgers will. If we’re talking pure production they won’t even come close to Rodgers.

The discount on Rodgers comes about as people expect the Packers to move on from Rodgers and hand the keys over to Jordan Love. If you look at the contract situation I do not expect that to be the case until after the 2021 season at the earliest. The current price on Rodgers is around a future 1st and 2nd in a Superflex league. That’s an easy price to pay for a QB that could put you over the top to win a title this year.

A top 10 WR option for the rest of the season and currently available for an early 2nd.

In light of the Kittle injury, Waller is now a top 3 option at the toughest to fill position. A late 1st should be enough to tempt him away from the Waller owner.

A free agent in 2021, I’m not comfortable buying Conner past this year but I’ve got him as a top 12 RB for the rest of the season. Currently, a late 1st is his current price.

Jeudy was my WR2 in this year’s rookie drafts. However, he has been overshadowed by some of his other draft class colleagues. The likes of CeeDee Lamb, Justin Jefferson, and Chase Claypool have all grabbed headlines.

Jeudy has been solid but unspectacular through 7 games scoring 9+ points in 5 of 7 games but never breaking 15. I still believe in the talent and honestly think he is the best route runner out of the 2020 receivers.

Furthermore, if you dig into the peripheral numbers Jeudy is due for a breakout week. He received over a 20% target share again in week 8, and sits at 19.1% on the year. The stand out stat is the volume of air yards Jeudy had in week 8 he received a league-leading 162 Air Yards.

The Jeudy breakout is coming and if you can pre-empt it and buy now you will reap the rewards. Jeudy was a late 1st 6 months ago so it will be tough to buy him for any less than that. But you can trade a player in a similar range, whilst getting younger that could help a team compete now.

Across the last two weeks, Jakobi Myers has seen a 79% and 90% snap share, whilst leading the team in targets through both games. Myers was somewhat of a Twitter darling last off-season as the heir apparent to Julian Edelman but that suggestion has since died down.

However, with Edelman and Harry battling injuries Myers has stepped up. In week 8 alone Myers had a 43.5% target share. The issues with Myers is he isn’t an incredible athlete, and doesn’t have the fantastic draft capital to make him a desirable option.

But at a current price of a future 4th round pick he’s worth a dart throw at the end of your bench. If he pans out as a reliable starter down the stretch then he’ll massive exceed what you paid (he might be on your waiver wire as we speak).

12 months ago I was really excited about Marvin Hall. He seemed to be the potential long term slot receiver in Detroit. That opportunity was never truly realised with Hall never seeing more than a 10% target share in any one game.

However, Hall is now coming off a week 8 performance that saw a 17.5% target share and 115 air yards whilst seeing 69% of the offensive snaps. If Kenny Golladay’s injury is longer-term it could allow Hall to see a greater opportunity. Hall is currently available for a 4th round pick or as a waiver add, similar to Myers.

These are specific sells based on being in a rebuild situation. Realistically, if you’re a contender you’re not in a position to be selling off assets. The TE position is a horror show only made worse by the recent George Kittle injury. That makes reliable starting options hugely more valuable.

Cook is TE 13 on the season, averaging 11.3 points per game but is a top 10 TE on a per-game basis. Cook has been remarkably consistent scoring 9+ fantasy points in 5 of 6 games played this season.

It’s the lack of upside that hurts him. He is certainly not a sexy option for your lineup. Infact, it feels a little bit gross putting him in your lineup each week. But with the way the TE position has gone this season an awful lot can be said for those 9 points as a floor.

However, If you’re not a contender Cook is not helping you much beyond this year. Cook is currently in his age 33 season and certainly on the decline in his career.

His current price is around a future 3rd round pick. But if you can float Cook to a TE needy owner. **cough George Kittle owner**. You may be able to squeeze a late 2nd out of them.

I could almost copy and paste everything I’ve said above about Jared Cook in this section here. Graham is also in his age 33 season. Graham is currently the TE9 averaging 9.7 points per game.

He isn’t going to help you beyond this season, so if you arent a contender now is the time to recoup any potential value he may have.

His current price is around a future 4th, but you could sell high to a desperate owner. You might be able to get a future 3rd you are better of grabbing that value now. It won’t be there for much longer, by that I mean the next few weeks.

So that’s it for the Week 9 edition of dynasty buy and sell. Remember, you can find all of our dynasty articles here, and all of our work is posted across our social media channels. We are on Twitter, Facebook, or Instagram.