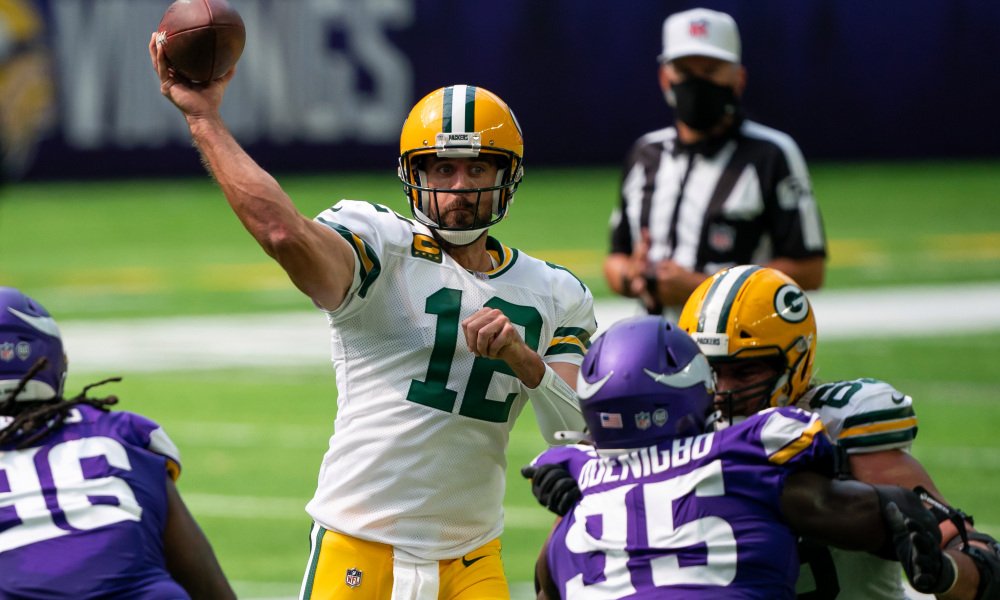 It’s time for some 2020 Playoff MVP Predictions, and we thought why not kick it off with the QB position? A week where hopes are high and dreams are shattered is finally over – the infamous week 13 definitely came with some surprises. In most leagues, this was the final week to secure your spot in the playoffs and push for that elusive championship you long for. If you are like me, you’ll have been tracking all leagues where you have a chance of making it all week, even if that chance is very slim. Now you have your answers!

If you’re not looking at those playoffs, don’t fret, just keep reading. I’ll be going over some of the players I think have a great chance of carrying teams through the playoffs for a championship. If you have one of these on your roster, it might be worth looking for possible trades with those teams who are making a playoff push (providing your trade deadline has not passed).

Just a quick note before we get into things, I believe in giving you the stats to make your own decisions. I will give you both sides of the story. Take Jameis Winston for example, I won’t tell you he was great last year with 30 touchdowns without also mentioning his 30 interceptions. You’re running your dynasty team – you’re the decision-maker, not me. If you win a championship, that’s because you made the right judgments. I’m here to provide you with stats for the decisions you may need to make.

Aaron Rodgers has been playing like his usual self this year, insanely well. Whilst he’s not in the top 2 conversation for his position anymore, the only times he’s fallen out of the top 10 for any given year is due to injury. Even last year in his “down year”, he finished as the QB9. He’s already thrown 36 touchdown passes to only 4 interceptions (26 to 4, respectively, last year) and is on pace to throw for north of 4,500 yards. He’s currently at 3,395 passing yards.

Although Rodgers has been playing extremely well, there is still an illusion that this is a run-first team. The duo of Aaron Jones and Jamaal Williams is a tremendous tandem – I’m not disputing that. The Packers have been averaging 27 rushing attempts for 124 yards per game so far this season. However, the passing attack looks even better. The Packers are averaging 35 passing attempts for 272 yards per game. This suggests the team is a lot more balanced than the general populous thinks.

Rodgers had a tough matchup in week 13 against the Eagles. They were only allowing the 8th fewest points against quarterbacks this year. A large part of Rodgers’ success was the great play by the Packers offensive line. The Eagles defensive front was playing sneakily well with 24 sacks so far this season, which they added two more.

The Packers placed Corey Linsley on injured reserve in week 13, meaning he won’t be available till week 16 at the earliest. The new offensive line – as showcased against the Eagles – lined up as: David Bakhtiari, Elgton Jenkins, Lucas Patrick, Billy Turner, Rick Wagner. Although Corey Linsley has been playing extremely well, only allowing one sack this season.

During the fantasy playoffs, his schedule looks very tasty for a quarterback who, just last week, tore a great Bears defense apart for 5 offensive touchdowns (3 passing):

Rodgers only threw 30 times for 18 completions, 240 yards, and 2 touchdowns when these teams met in week 2 (at Lambeau) – I say “only” as it’s his 3rd worst performance this season. The Lions are 9th in points allowed to quarterbacks this year, allowing an average of 262 yards, 2 touchdowns and 0.6 interceptions (7 total interceptions on the year) per game. Rookie cornerback – Jeffrey Okudah – was inactive in week 13 with a groin injury. This could very well be the case in week 14 too. Desmond Trufont was placed on injured reserve in week 13 which means he won’t be available for this game either.

The Panthers are a very interesting team; they’re allowing the 17th most fantasy points to quarterbacks, which is the middle of the league. It’s not much to get excited about, but when you take the Packers offensive line playing great, and a young defence on the other side, you can see a clear path to a great performance by Rodgers. Rodgers has picked on the young and inexperienced defensive backs all year long. One intriguing stat is that the Panthers have 6 one-score games out of their 12 played so far – this matchup could follow this trend very easily. That, combined with Christian McCaffrey’s potential return from injury against a very questionable run defence, could make for an interesting game.

As I mentioned in the Panthers rundown, running backs are doing extremely well against the Packers this year. Derrick Henry isn’t like any other running back – he’s averaging 109 yards and a touchdown on the ground per game. Do you believe in coincidences? Whether you do or not, the Packers defence is giving up the exact same as Henry’s average per game. I expect the Titans to try and win the time of possession battle, meaning Rodgers will need to throw more. In the worst-case scenario for the Packers (best case scenario for Rodgers owners): the Packers defence wouldn’t be able to stop the run, peeling time off the clock and Derrick Henry finding the endzone, Rodgers would need to throw a lot to keep up.

Like Rodgers, Tom Brady is having a great year in Tompa Bay (couldn’t resist, not sorry). He’s currently three spots behind Rodgers at QB7 on the year. Brady has 3300 yards, 28 touchdowns, and 11 interceptions so far this season. While Brady has fewer touchdowns and more interceptions than Rodgers, he does have more completions (31 more)and has attempted to throw the ball on nearly 60 more occasions.

Brady has shown he can have good games, and not so good games. In week 9, Brady played the Saints at home (currently giving up the 6th fewest points for quarterbacks). He threw for 209 yards and 3 interceptions with only a 57% completion rate. Conversely, when playing bad defences, he has shown he can explode. Take week 7 @ Raiders for example; Brady threw for 369 yards and 4 touchdowns. He even scored a touchdown on the ground (although, I would not rely on this every game). The Raiders are currently allowing the 11th most points to quarterbacks this year. I’m not saying this is what you should expect every week during the playoffs, but this shows his upside.

Luckily for Brady, and hopefully you, he faces some of the worst defences in the league to round out the season:

The Vikings defence is slap-bang in the middle of the pack so far this year, allowing the 16th most points to quarterbacks. As explained in the aforementioned breakdown, Brady went off for 369 passing yards, 4 touchdowns, and 1 rushing touchdown against a defence around the same caliber – the Raiders. I expect the Vikings young secondary to struggle to contain the seemingly limitless weapons the Buccaneers have. This game should set you up for a great shot to move into week 15.

It’s safe to say the Falcons defence has been terrible this year. Although they had a great game against the Raiders in week 12, ending in a 43-6 upset, I can see Brady picking on favourable matchups all game. The Falcons defence caused 5 turnovers and scored a defensive touchdown. If they can dial up the same pressure as they did against Derek Carr, on Brady, he will be uncomfortable in the pocket and may have a tough day. The Buccaneers have a lot of weapons on offence, whereas the Falcons have been questionable with their passing defence. They have allowed the 2nd most fantasy points to quarterbacks this season, and with two games against the Buccaneers (they also meet in week 17 if this helps you, this time in Tampa Bay), I can’t see them getting any better.

Brady has been great against bad defences, just like you’d want him to be. If you need a recap, take a look at the breakdown on this game in the above (Rodgers) section.

Before you write off the rest of this article, just hear me out. I could’ve included another top quarterback like Lamar Jackson or Patrick Mahomes, but fantasy football is risky; to win a championship, you’ll most likely have to take a risk or two. I decided to include a little sleeper in here to spice things up. No one likes a plain article, am I right?

I know Mitchell Trubisky has struggled to say the least. However, I’m not talking about Trubisky being a top 5 quarterback every week. A lot of teams, especially in Superflex, may only have two quarterbacks. If one of those are a player like Drew Brees or Joe Burrow, the roster would be in serious trouble going into the playoffs.Trubisky winning the starting job could be exactly what a team in that situation needs. Trubisky has a real shot at keeping the starting job, even though he could not quite pull off a win against the Lions last week.

David Montgomery has been playing lights out over the past two weeks with 175 rushing yards and 2 touchdowns on 28 attempts, adding 79 yards and another touchdown on 10 targets. If Montgomery can keep this up, he will provide Trubisky with a reliable run threat to keep defences guessing. I won’t go too into depth here (yet), just something to be mindful about.

If (and it’s a big if) Trubisky keeps the starting role, his playoff schedule looks great:

With their (arguably) top cornerback suspended for the remainder of the season, the Texans find themselves in deeper trouble against the pass than earlier this year – they have allowed the 12th most points to quarterbacks. Now, this is near the middle of the league, but still favourable. This was all with their CB1. On the other hand, the clear difference-maker in this matchup will be JJ Watt. The Bears offensive line has been terrible all year, so Watt could be poised to have a great game. Can they stop him?

Likewise, for a recap, go to the breakdown in the Brady section. Although the Vikings defence has been bad this year, Trubisky has not performed well historically. In the 6 games he has faced off against the Vikings defence, he has thrown 2 touchdowns to 3 interceptions. I would take this with a pinch of salt as this new defence is not the mighty Vikings defence of old (well, of the past few years).

This is possibly Trubisky’s best matchup. CJ Henderson is currently on injured reserve, however, he has a chance to return prior to this game. The Jaguars are one of the worst defenses against the pass, allowing the 3rd most quarterback points this year. Again, a star defensive lineman will be the issue for Trubisky and his offensive line – Josh Allen.

That’s it for our 2020 Playoff MVP predictions for the QB position! Keep an eye out for the other positions dropping shortly. Remember, you can always reach out to us on social media with any questions we are on Twitter, Facebook, or Instagram. And don’t forget to check out our weekly rankings!