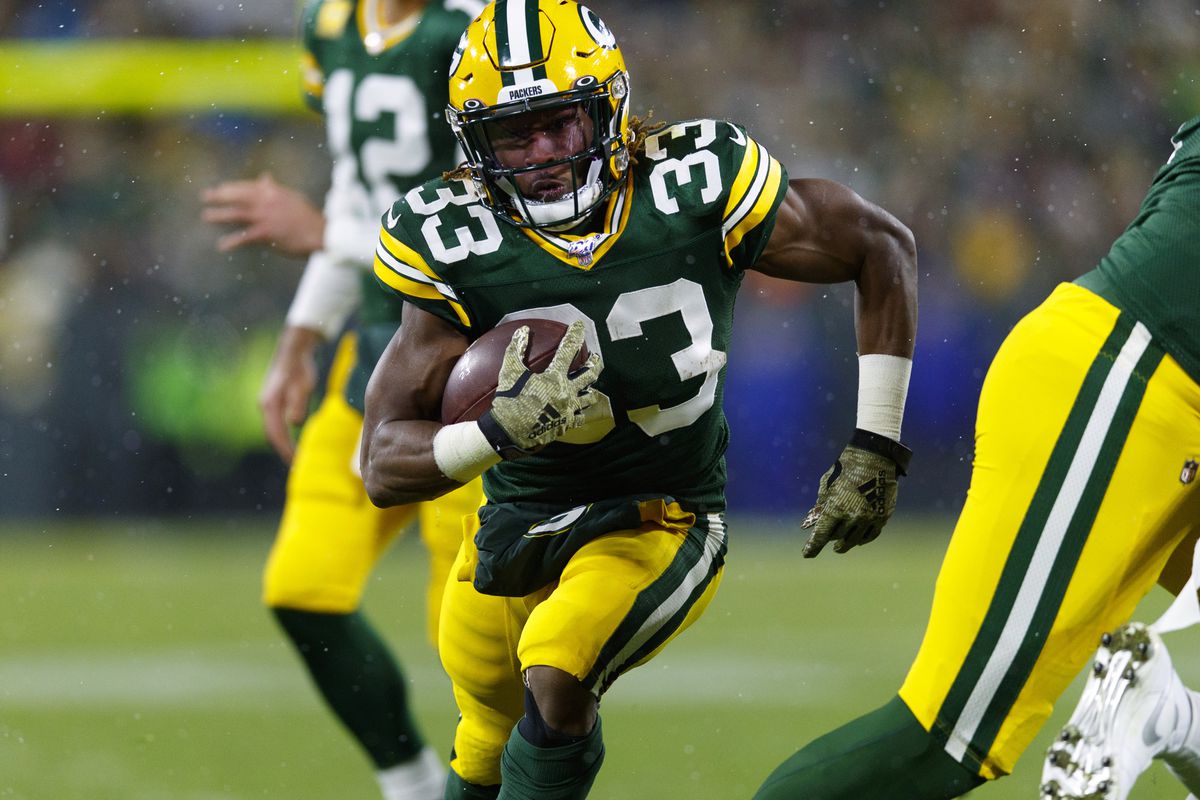 Continuing with our DraftKings showdown slates in 2020, we bring you Tennessee @Green Bay. The 10-4 Tennessee Titans travel to Lambeau Field to face the 11-3 Green Bay Packers. This game has playoff implications for both teams- if the Titans win and the Steelers win earlier today, the Titans will win their first AFC South title. If Green Bay wins they can clinch the NFC’s number 1 seed. I don’t expect anyone to rest this game

The Titans have been an explosive offense led by Ryan Tannehill and MVP candidate Derrick Henry. As of now Titans lead the league in scoring, ahead of the Kansas City Chiefs and the Green Bay Packers.

Derrick Henry leads the league in rushing and has rushed for 362 yards in his last two games. No matter how hard teams try to stop the Titans run, they all ways find a way to dominate their opponent.  Henry is responsible for 30% of the offensive production and averages 22.9 carries a game.

His efficiency and volume have me leaning to locking Henry in the captain spot. The Packers this year have been struggling to stop the run this year as they give up the 5th most fantasy points to running backs. Mike Pettine, the Packers defensive coordinator runs a 3-4 defense with emphasis on stopping the run with gap control.

The linebackers will be put to a test as they will be key to stopping the Titans run game. Pettine will try to use this game to sure up his run defense, but no matter how much teams prepare for Henry, they can never stop them.

The Titans offense runs like a well oiled machine, no matter the opponent, time on the clock or field position, they will call a running play then follow it up with play action. Tannehill has benefited from this and has moved the ball well in the air. He hasn’t had to throw too much as he is averaging 31 passing attempts a game.

Throwing to wide receivers with linebacker bodies has made Tannehill’s job easy. A.J. Brown one of the most talented wideouts in the league is boasting a target share of 24.2% this season. Corey Davis is right behind him with 22.8% target share.

They average 58.17% of their target depth between the line of scrimmage and 9 yards out. This bodes well against the Packers defense because they play soft coverage. Jonnu Smith has been Tannehill’s third favorite target. He is responsible for 20.1% of the offense and has been averaging 3.5 targets over the last two games.

MVP candidate Aaron Rodgers has been playing on another level, racking up 40 touchdowns with only 4 interceptions this season. Davante Adams is ranked second in touchdowns and Adam Jones has rushed for at least 130 yards in two of his last three games. This offense is concentrated between a few players which makes for great plays in a showdown lineup.

Aaron Rodgers has been averaging 5.1 red zone passing attempts a games and should easily punch in a few scores through the air. Adams has shown elite production this season hosting a 34% target share and responsible for 39.7% of the offense’s production. Robert Tonyan, although has a low target share, has been responsible for over 20% of the Packers offense. He has scored a touchdown in each of his last four games.

Aaron Jones is ranked 6th in yards after contact, behind Derrick Henry, Dalvin Cook. James Robinson, Ronald Jones II and David Montgomery. He averages 15 rushing attempts a game and is responsible for 14.2% of the target share. If the Packers gain an early lead, they will rely on Jones to keep the clock rolling to keep it out of the Titans hands.

So, there are our DraftKings selections for the 2020 Showdown of Tennessee @Green Bay! Remember any DFS questions, you can check out our articles here. Or you can find us on Twitter, Facebook, or Instagram.