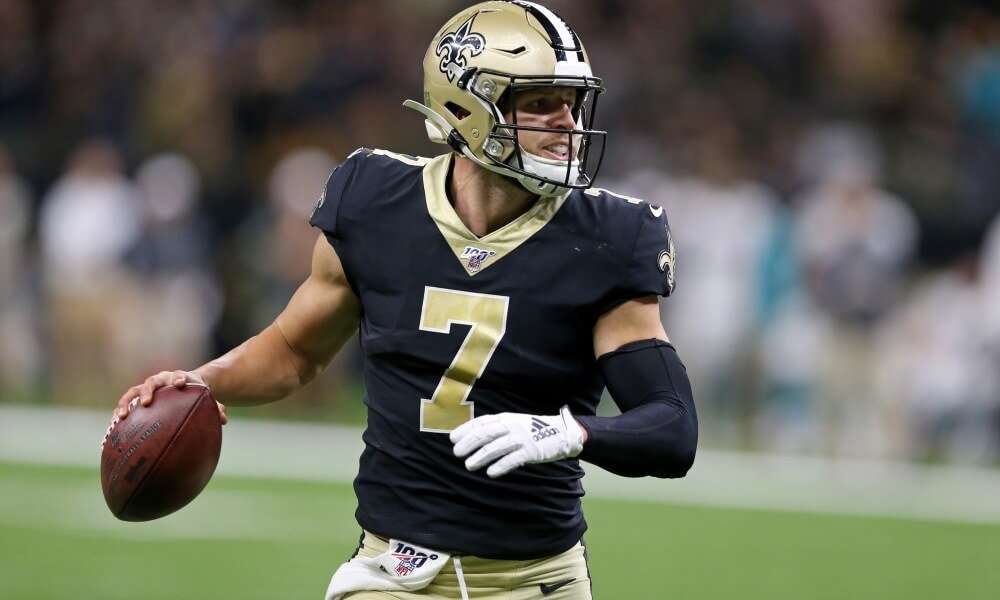 Bye weeks and scheduling have taken away alot of the options that you might look to bank on for DFS. But there are still plenty of options to consider.

Taysom Hill ($5,600) looks set to play, and is hard to overlook, given his huge rushing floor. Hill got the start in Week 13, with 101 yards on the ground, with 264 yards and 2 TDs through the air. Even with his 4 INTs that were thrown, that was a good selection. The Jets defense has been awful this season, and there’s no reason to doubt that turns around in this game.

If you want to save a little bit more salary, then Cam Newton ($5,400) is worth a look. Look, there is no easy way of saying it, his performance against Miami was awful. But, this week he has a great get-right opportunity against the Falcons. With this rushing and scoring threat h is worth considering in some of your lineups.

In season-long leagues, it almost feels like the selection criteria is if they are fit and available they are worth a start. That leads to a few different options worth going for.

A player that could smash or absolutely fail is Alvin Kamara ($7,900). The matchup on paper is a nice one, and Mark Ingram is currently on the COVID list. So what’s the doubt? Well, Taysom Hill. His rushing ability always creates doubt about the ceiling for a RB in the offense, and Kamara is only just back from a knee injury that has forced him to miss the last four games. But, under $8k, it’s hard to not consider him at all.

Leonard Fournette ($7,400) is having a great season for Tampa Bay, as he has become the lead back for the offense. The matchup on paper is not the easiest, but you can definitely run on Buffalo. I mean, the Patriots managed to win a game doing little else!

Outside of that a really popular play this week is likely to be Javonte Williams ($5,900). He had a massive game last week, and Melvin Gordon is currently suffering with a hip injury. Gordon still has an outside chance to play in the game, but even so, there is going to be enough production available for both to have a good game. So against Detroit, this is likely to be a chalky play.

Outside of those, you’ve got some cheaper options due to injury that have opened up. The Tennessee Titans going crazy on the ground against Jacksonville is a festive tradition, but this year it’s not going to be Derrick Henry doing it. Instead, it’s going to be either Dontrell Hilliard ($5,300) or D’Onta Foreman ($5,100). Foreman feels like the player that is going to be used on the ground primarily, and Hilliard used in the passing game as well as having some carries. Given the DK scoring, I’d go with Hilliard. But I’d be happy mixing in both.

Lastly, there is the 49ers backfield to consider. Eli Mitchell is out with injury, so that has given opportunity for one of the cheaper options to perform. Jeff Wilson ($4,400) could be suiting up for his first action of the season, although he has been suffering with a flare-up of his knee injury. If you want stone-min player, and the risks that come with it, JaMycal Hasty ($4,000) is worth mixing into some lineups. WIth their pricing so low, you don’t need them to have that much production to smash.

With the situation with the RB position, you could opt for some top-tier WR talent more easily than you would in previous weeks.

The matchup for Dallas’ offense seems like a great one, putting CeeDee Lamb ($7,200) and Amari Cooper ($5,900) into consideration. Washington’s defense is among the worst in the league, and there are doubts around the ground attack of the team.

D.K. Metcalf ($6,500) is always worth considering, given his ability to make any play a big gain. The Seattle offense might be forced to go through the air more than it would have previously, with the injuries they have suffered to RBs. Houston’s defense isn’t one to worry about too much either.

Then, another opportunity to save salary due to player unavailability. COVID has hit the Chargers hard, with Keenan Allen already ruled out of the game. Mike Williams ($6,000) could make it to play, if he continues to test negatively, That unavailability makes Jalen Guyton ($3,400) and  Joshua Palmer ($3,000) worth considering too. Knowing which one is going to be performing is harder to determine, but Palmer allows you to save a little to spend up elsewhere.

This week at TE, I’m happy to pay up for George Kittle ($6,900). The 49ers offense might well have Deebo Samuel back, but the impact of his return is more like to limit Brandon Aiyuk’s production rather than anything else. With the amount that you can save at RB and WR, you can afford to treat yourself.

Outside of that, Dawson Knox ($5,000) is worth considering in GPPs. He really struggled in a really public game on Monday, with mutliple drops. That is going to limit the number of people playing him this week. But, he has been great in the redzone this season and Tampa Bay have allowed TEs to score on them at times.

If you want a hold-your-nose option Evan Engram ($3,500) is worth some level of consideration. The Chargers defense has struggled to limit production this season, and the Giants offense isn’t exactly stacked with options. On this slate, you might not need to save, but if you wanted to reach for one more premium option you could get it moving with selecting Engram.

Defense almost feels like you can go for whoever you want, given the savings you can make everywhere else. So I’ll make each one brief.

Denver ($3,800) are the obvious choice, given Detroit’s struggles on offense, but there are other options that I prefer. Carolina ($2,800) have been good all season (ignore that game against Miami), and are coming off a bye week where they will have recovered. Atlanta have allowed defenses to score well against them, such is their defensive struggle this season. Lastly, Jacksonville ($2,300) are worth playing against a Tennessee Titans offense that could look to kill the clock and survive the game.