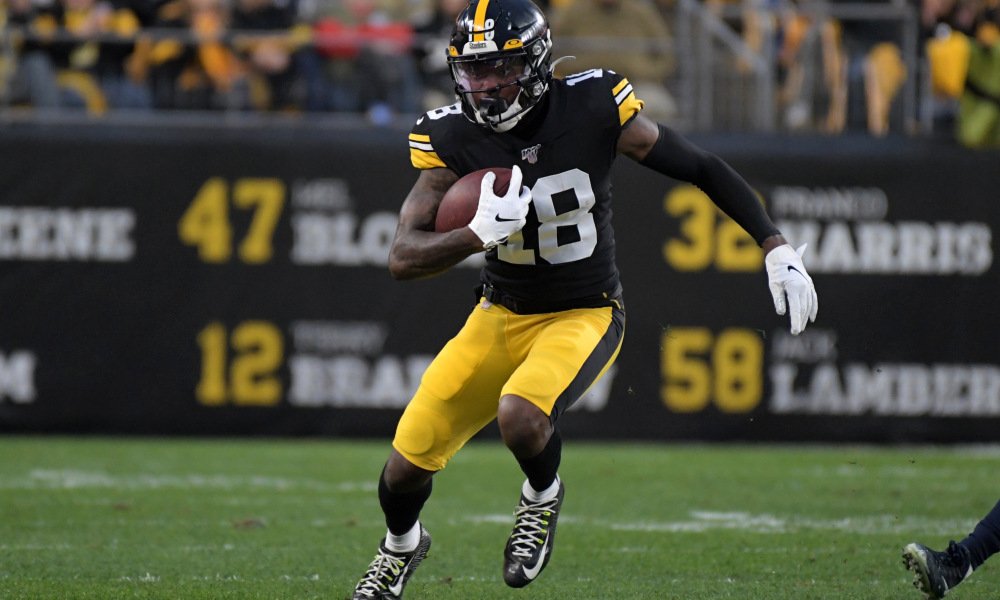 The 2020 playoffs are here, and we continue with our DraftKings Showdown coverage with Cleveland @Pittsburgh. The head coach-less 11-5 Cleveland Browns head to Heinz Field to face the 12-4 Pittsburgh Steelers. The Browns have ended their playoff drought will need to muster all their firepower if they want to keep up with the AFC North champions. Vegas currently has set the O/U to 47 and Pittsburgh is favored to win by a touchdown.

Johnson has been Big Ben’s most prolific receiver this year but he has been battling issues with drops. His volume and big play potential negate any deficiencies he make him an excellent play. He carries a 22.9% target share and is responsible for 22% of his team’s offense. Browns tend to lineup in a Cover 3 that ignores the run and gives way to short passes. This should help Johnson thrive and exceed expectations as the majority of his target depth is between 0-9 yards.

Juju should be the primary benefactor of the Browns coverage. The slot receiver has finished 6-65-1 and 2-6-0 against the Browns this season. His one bad game was due to Steelers winning by a blowout. The Browns at the moment are giving up a ton of fantasy points to wide receiver position and Juju should be able to pay off his salary and bring a little more in this game.

Big Ben hasn’t historically been known to rely heavy on pass catching tight ends. However, all that change with the arrival of Eric Ebron. He has averaged 1.1 red zone targets a game- tied first with Juju. Although he may not get a ton of passing yards, his receptions should be high and he has the potential for multiple touchdowns. The salary saving is nice as you can fit in both QBs and their pass catchers to have a balanced, a well correlated lineup.

Big Ben has been averaging 40.5 pass attempts a game. The Steelers have abandoned their run first offense for passing game. Roethlisberger’s averages 6.26 yards per passing attempt and likes the receivers to get out in open space to move the ball down the field. Also he has been the best at getting the ball out of his hands. At the moment Vegas has the O/U at 47 but this game could easily become a shoot out. Big Ben is guaranteed for 1.5 touchdowns this game; its going to come down finding the right Ben + WR/TE stack if you want to take down a GPP.

If the Browns fall behind early we will see Hut’s usage increase. He leads the backfield in target shares and is effective as a runner in the RPO as he is top 20 in the league in yards after contact. Also his 2.4 red zone rush attempts make way under price for his upside. Nick Chubb will garner higher ownership so you can use Hunt as a way to differentiate yourself from the field. The Steelers run defense has been outstanding this year so Nick Chub may disappoint.

For the season, Austin Hooper has averaged 5.4 targets a game. Over the past four weeks he has averaged 8.7 targets and has developed chemistry with Austin Hooper. If the Steelers can lock down Landry and Higgins, Hooper will be Mayfield’s go to option. He is second on the team in target shares and is responsible for 17.5% of the team’s offense.

The last part of the season Baker Mayfield has improved tremendously as a quarterback. It could be the result of adding more RPO plays to offense, allowing Baker to survey the field as he scrambles out of the pocket. The Steelers have been applying a ton of pressure opposing quarterbacks. Mayfield is terrible when he feels the pocket collapsing. He will need to build an early lead to prevent the defense from being aggressive. If the Browns go up two scores. It will be because of a Mayfield play action pass or a goal line scramble.

Speaking of Steelers D, they are a viable salary saving option. We know their times Baker tries to do a little too much which could lead to a fumble or an interception. The Steelers are also top 5 in the league to bring pressure to opposing quarterbacks

So, there are our DraftKings selections for the 2020 Showdown of Cleveland @Pittsburgh! Remember any DFS questions, you can check out our articles here. Or you can find us on Twitter, Facebook, or Instagram.