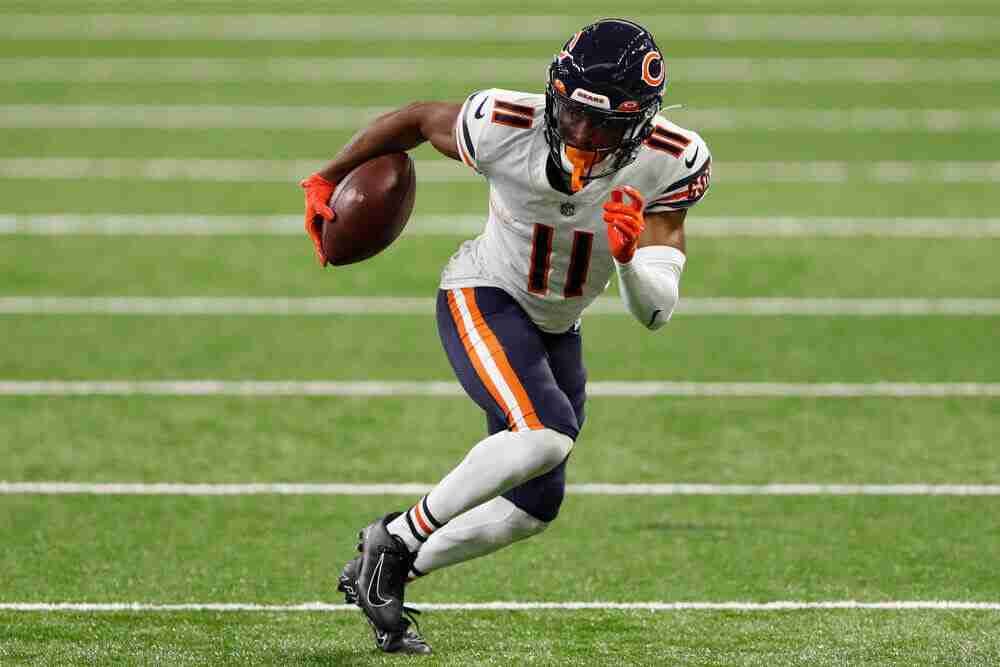 Our Chicago Bears 2022 Fantasy Preview gives you the run down on the teams outlook going into the season. The team decided they had seen enough from the sidelines, and moved to change the coaching staff. Matt Eberflus, who was the IND DC, comes in at the top, and Luke Getsy (GB QB Coach) steps in at OC. The big question will be around the ability of Justin Fields to take a step up in the offense in his second year.

Fields is an interesting player for fantasy this draft season. He has what you want, dual-threat ability, and a strong arm. The issue is that the team’s receivers aren’t up to par (outside of Darnell Mooney).

Fields could turn it around, but I’m not feeling confident about a player going into their second year, with an OC that has never called plays before. He will likely take a step forward, but not consistent enough to draft him. Likely to finish as a QB2 with the occasional big week.

Montgomery is the clear workhorse in this backfield. Every season that Montgomery has been in the league he has had over 220 carries. That volume is solid RB2 production at least. Montgomery is also involved in the receiving game too, with 48 receptions on average over the past two seasons.

The issue is that the Chicago offense is one of the worst in the league, which limits the number of scoring opportunities for Montgomery. But, he is still worth picking up as your RB2, or RB1 if you went WR heavy to start your draft.

Herbert and Evans are afterthoughts. With Montgomery’s role in the offense, there just isn’t enough volume to go round. Even if Montgomery were to get injured, it’s likely a split between the two.

Mooney followed a streaky season with a solid step-forward in 2021. But at the start of the offseason, there was a question mark over the future of Allen Robinson. He has since left, leaving Mooney heads-and-shoulders atop the depth chart.

Mooney is only really going to be limited by how many scores the team are able to produce. I have him as a WR2, but if Fields takes a step forward in his second year, he is in the WR1 conversation. Think Allen Robinson earlier in his career, effective for fantasy due to volume if nothing else.

Outside of Mooney, Pringle and rookie Jones are going to flash, but they are only really worth considering in best ball leagues. There isn’t going to be enough volume for consistent fantasy production once Mooney, Cole Kmet and David Montgomery’s targets are removed from the offense.

Kmet falls into a group of TEs that could break into a mid-tier TE option. Not good enough to get to the top of positional scoring, but you aren’t looking to stream each week.

There isn’t a massive amount of receiving talent on the roster, and with the team bringing in Griffin and O’Shaughnessy, there should be enough blocking power to allow Kmet to work as a receiver.