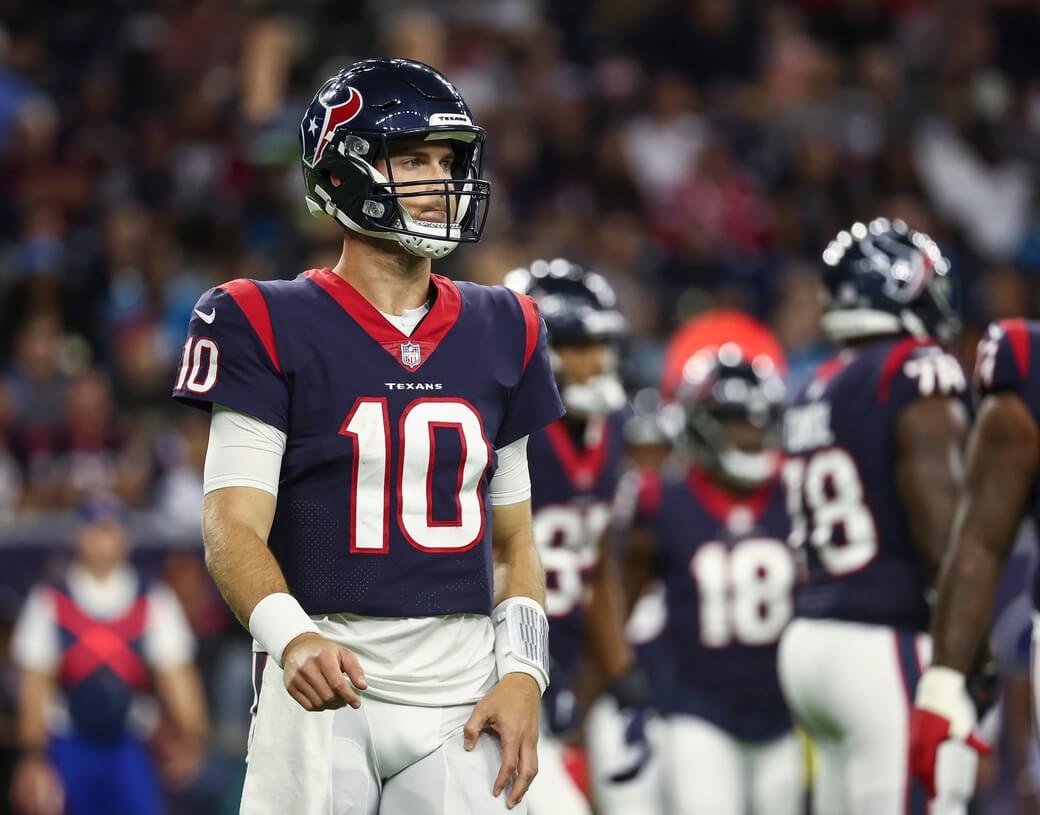 The Draft always brings winners & losers for dynasty value, and 2022 was no different. Here we identify some fantasy players that were winners or losers with dynasty value.

The Houston Texans in the middle of a big rebuild. With lots of holes on their roster and instead of addressing the QB position in the draft, they built up the support for their year 2 QB. They could have easily been drawn into one of the freefalling QBs. Ridder, Willis, Corral & Howell all fell to round 3 and beyond but they chose to stick with the improving Mills.

They not only avoided drafting a QB, but added protection for him. They drafted a solid guard in Round 1 in Kenyon Green and then added another weapon for Mills in John Metchie in Round 2. A QB upgrade in the future cannot be ruled out. But for now the starting job is firmly in the hands of Mills. Giving him some decent value in Superflex leagues especially.

This is clearly a big year for Zach Wilson who was taken as the No.2 overall player in the 2021 NFL Draft. The Jets are giving him every single chance of succeeding by giving him 2 of the top offensive rookie prospects in receiver Garrett Wilson and running back Breece Hall.

Although Wilson had plenty of struggles in his rookie year under head coach Robert Saleh there is now an expectation of growth entering year two:

Along with the 2 new additions mentioned above. The Jets also brought in 3TEs this offseason, signing CJ Uzomah & Tyler Conklin, as well as drafting Jeremy Ruckert in the 3rd round. They also already have last year’s big free-agent signing Corey Davis and highly rated Elijah Moore entering year 2 of his nfl career. If Wilson cannot make a go of it this year then he never will.

A big winner of the Draft away from the QB position was undoubtedly James Conner. The 2021 free agent move to the Cardinals was a tremendously successful one. Becoming one of the better RBs in the league. That led to a 3-year contract and the departure of Chase Edmonds.

This alone was a win for Conner. But the fact the Cardinals who were tipped to be in the RB hunt in the draft then avoided one right until pick 201. That means Conner is in great shape entering 2022.

With only Eno Benjamin and Ingram behind him right now, he can be expected to be a strong RB2 with RB1 possibilities going forward. With his goal-line role, a repeat of 2021’s RB5 finish cannot be entirely ruled out.

The Chicago Bears feature on both sides of this article. One winner and one loser and the reason is very much related. Darnell Mooney was extremely impressive in beating out Allen Robinson in 2021 to the WR1 spot on the team. Ending with a solid 1,000 yard season in year 2.

Long-time veteran Allen Robinson then left in the offseason to join the LA Rams leaving Mooney as the clear No.1 target on the team entering the NFL Draft. The Bears then declined to select a receiver with either of their two 2nd round picks and finally settled for older prospect Velus Jones Jr in round 3. Jones brings plenty of speed to the offense. But he’s very much playing second fiddle to Mooney who looks set to continue his good on field rapport with QB Justin Fields. In that role he should be able to produce another 1,000+ yard season.

A huge winner of one of the big trades to go down on night one of the NFL Draft, Rashod Bateman sees a clear path open up to WR1 on the Baltimore Ravens. Marquise Brown was dealt to the Arizona Cardinals. Giving Bateman a link back up with QB Kyler Murray in return for pick 25 in a draft that the Ravens ended up adding zero WRs in.

Bateman was a first-round selection last season, and should be getting an increase in targets. If you haven’t tried to acquire Bateman before now the time may be too late. Given the role he is set to occupy, his price has rocketed up. There’s no doubt he has the ability to step up and be a solid WR2 with fringe WR1 upside.

Justin Fields’ WR1 was a big winner following the NFL draft. But unfortunately, his QB has to be featured as a huge loser with the organization not doing much to help him. There were some really encouraging signs for Fields who showed clear growth following a poor start to his rookie campaign. If his arsenal of weapons was lacking last season then this season they appear to have taken a further step back.

I’m afraid Fields will succumb to poor choices from the organization. Something that could lead to a staff clear-out come next offseason. With new regime changes come new ideas and they often want to bring in their own QBs. Will Fields fall foul of poor management? I do feel rather concerned for my dynasty shares right now.

Who would have thought the No.1 seeds in the AFC from last year would want to trade away their elite young WR. Possibly take a step back from challenging once again? Well that’s the reality that faces veteran QB Ryan Tannehill with the loss of AJ Brown. They then set upon his replacement immediately with the selection of Treylon Burks out of Arkansas with the 16th overall selection, but he isn’t Brown-yet.

With Julio Jones now floating around on the free-agent market, the team are resting hopes on Robert Woods coming off a torn ACL in 2021 and the rookie who certainly comes with a few question marks. Add to the fact the team then selected mobile QB Malik Willis in round 3. That is going to cause some tension within the building, and the team may exercise their out on Tannehill’s contract next offseason, it’s uncertain times for the long time Dolphin.

RIP Michael Carter. Breece Hall the big bad wolf is in town and he’s hungry for Michael Carter’s workload. Carter a 4th-round pick in the 2021 NFL Draft looked set to be a fine fantasy producer for dynasty. That was before the Jets were in position to take the top running back from this years’ rookie class.

Take him they did and Hall is in a great position to be a top fantasy asset for the next few years leaving Carter owners fighting for scraps and hoping for injury.

I envisage a 70/30 split at best for Carter who saw time shared with TY Johnson & Tevin Coleman last year and are back for another season leaving not much scope for upside left for the UNC product.

This one particularly hurts as I was finally ready to go all in again on Rashaad Penny and then got my dreams crushed by Kenneth Walker, drafted in round 2 and bringing a solid pedigree. Penny looked every bit of an elite RB in 2021 when he finished the season with the final 5 games averaging 134 yards and running in 6 TDs. The team then said in the offseason that they were focused on continuing to run the ball more which made sense given they traded away star QB Russell Wilson and now have a QB room of Drew Lock & Geno Smith.

All setting up fantastically for Penny who was shaping up to be a bargain starting running back for 2022 if he could stay healthy… It didn’t last long and it only took until round 2 for the Seahawks to grab Kenneth Walker who smashed it with Michigan State last season and he looks set to take over the RB1 slot over Penny.

An under-the-radar loser of the draft for me was Chase Claypool.

George Pickens fell unexpectedly in the Draft with his slide finally halted by the Pittsburgh Steelers 52nd overall. Pickens was one of my top 6 WRs I had grouped together and had 1st round grades on each. Pickens selection is tipped to be the eventual successor to Diontae Johnson who might move on at the end of the 2022 season. But, having also heard rumblings of the Steelers hierarchy being unimpressed with Claypool, I wouldn’t be surprised to see Pickens overtake Claypool as early as the back end of this season.

Difficult to gage Claypool’s lack of growth in year 2 with now-retired Ben Roethlisberger struggling to throw the ball more than 20 yards downfield. But with added competition in the form of a top rookie talent, I have enough question marks to now move away from Claypool while his value is still relatively high.

What do you think? Any other dynasty winners or losers from the 2022 draft? Don’t forget, you can get prepared for your fantasy drafts with our Fantasy Draft Kit. Or you can find us on Twitter, Facebook, or Instagram.