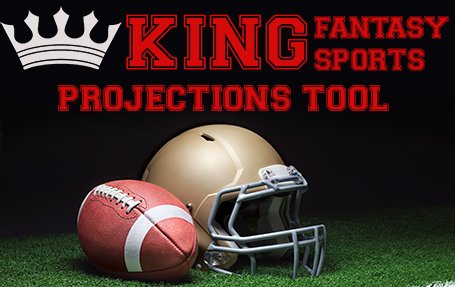 Make 2022 the first year that you create fantasy football projections, infact, we’ve done alot of the hard work for you with our projections tool. The tool will work for the majority of leagues. If your league has some funky scoring then it might need some adjustment.

If that’s the case just reach out to us on social media you can find us on Twitter, Facebook, or Instagram. And remember to check out the rest of the draft kit!

Both options work the same way- just choose whichever format you prefer. Click the link and you’ll be given a download/ asked to make a copy and then you can jump straight into it.

Steps to Create your projections

This is the first area you want to get to. It drives everything after you have entered your projections. It allows customisable scoring for your league (with the main scoring categories for leagues there). It will also determine some basic VBD calculations for you (more on that later) so that you know how to get the best selection for your next pick.

Each team’s tab is set up the same way. It works from estimating the number of players that are likely to be run for the team (that is based on the historical averages on teams they have been a HC/ OC for, or the NFL average if they weren’t). You can change that by overwriting the value shown.

At that point it’s simply dividing the rush attempts and targets and projection their production on them. Below the table you’ll see a players historical stats to give you a steer on filling it out.

Once you’ve done it for one team, repeat the process until you are done with all 32. Quite simple really!

Once you’ve got all of your projections, this tab will pull it all together. It pulls all of the stats calculated and applies your scoring to them.

Once that has been done, a VBD calculation is performed which allows for comparison across positions for value to your roster.