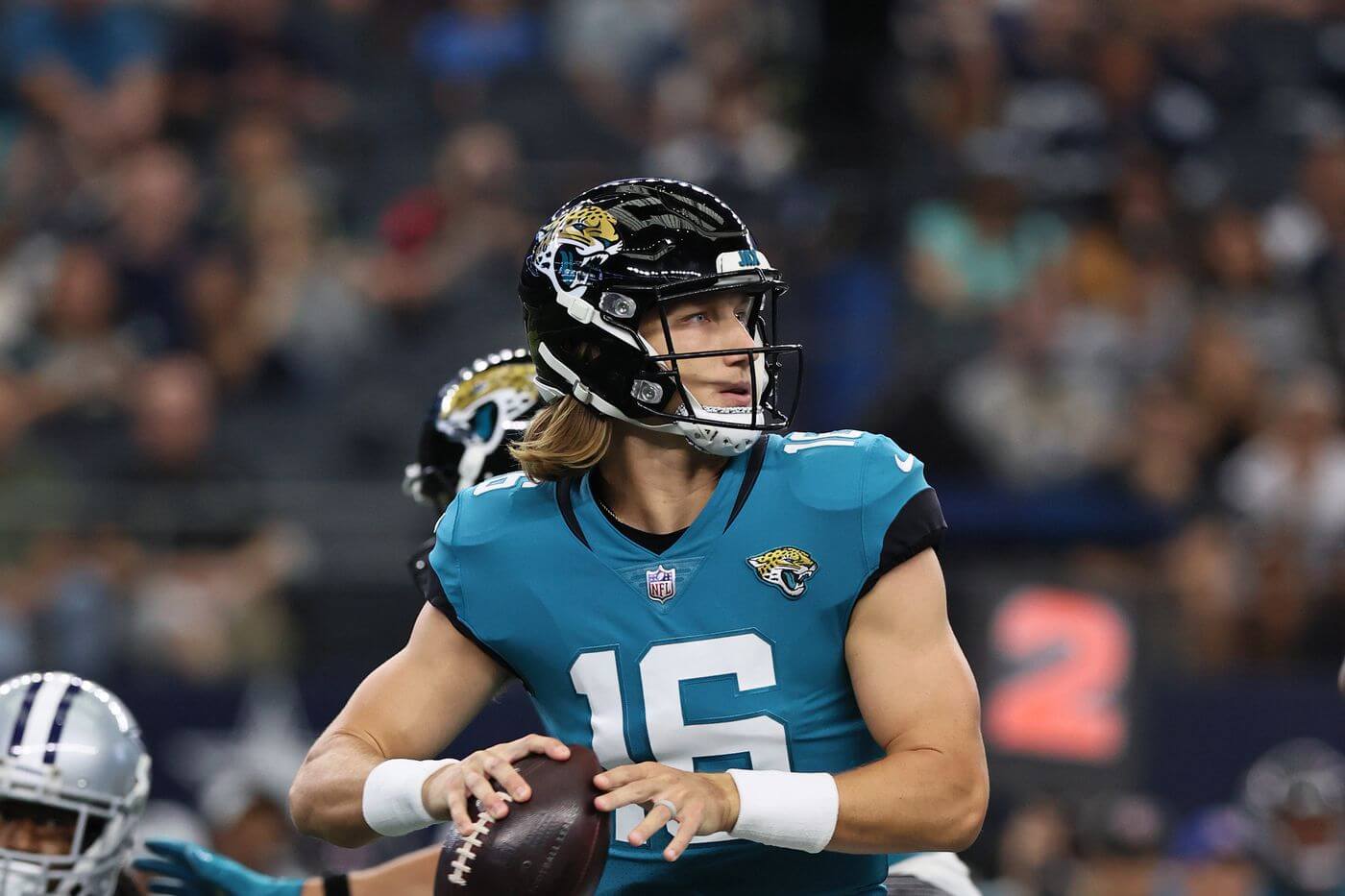 Our Jacksonville Jaguars 2022 Fantasy Preview gives you the run down on the teams outlook going into the season. The Jaguars were just awful last season. The coaching staff were making headlines, but for all the wrong reasons. But going into this season there is hope!?

The team appointed Doug Peterson to be a steady hand, and try and turn the ship around.

Trevor Lawrence didn’t live up to the hype around him entering the draft, but then how could he? The Jaguars were just awful last season.

The team have attempted to give him some weapons on offense, and made some improvements to his offensive line, but it’s hard to get too excited about him into this season.

He could make that second-year leap, like Joe Burrow did the year before, but I’m not holding too much hope. Lawrence would be taking on significantly more on his shoulders with the surrounding talent.

The RB that is most fantasy relevant for the team is most likely the one that is healthy. Travis Etienne missed the whole of last season with injury, while James Robinson suffered a serious injury towards the end of the season.

Etienne feels like the player that I’d be happier drafting at the moment, with positive signs he will be ready to start the season. He also has that in-built chemistry with Trevor Lawrence, which gives him an advantage over anyone the team were to bring in.

James Robinson is a player that I think I’m just out on. He has been good for fantasy the past two seasons due to volume, but reports are being made that say he is likely to start the season on the PUP. That is, if he were able to suit up at all!

If the team were to bring in a veteran (which is possible) I wouldn’t be overly worried about them either. There just aren’t many names out there that I think would disrupt this backfield, other than injury.

The offense missed receivers last year, and the team went out and acquired Christian Kirk on a big deal. That should put him in as the team’s lead receiver, at least on paper. The way this roster has been built though could spell trouble for him.

Kirk hasn’t been successful in the NFL to date, and that has been while he was the secondary or third receiver, and could be schemed open. On this roster though, that’s unlikely to happen. But, the volume should help him especially in PPR leagues.

Marvin Jones is like to be the primary outside target for the team, and downfield target. But really, that was a bit of a flash in the pan I think. He was afforded all of the opportunity in the world last season, with 120 targets. Despite that volume, he didn’t do too much by the end of the season.

As for Zay Jones and Laviska Shenault? They are late bestball candidates at best. They for whatever reason just haven’t managed to do anything consistently. This isn’t the type of offense that can comfortably support multiple receivers.

I’d say if you have two TEs, generally you have none for fantasy. But this offense is going to be similar to what was run in Philadelphia for years, which heavily featured two TEs on the field.

Dan Arnold at this point feels like he is going to be irrelevant largely for fantasy. Sure, he is going to steal some looks but given his struggles in blocking he might not see the field often.

Engram on the other hand is a player I’m likely to have on some rosters this season. He has been brought in with a good contract, which signifies in some part, that they are going to use him. With the lack of talent on the offense, there are plenty of targets up for grabs. I’d much rather take a gamble on Engram recapturing the form of his early career rather than some other late-round TEs.