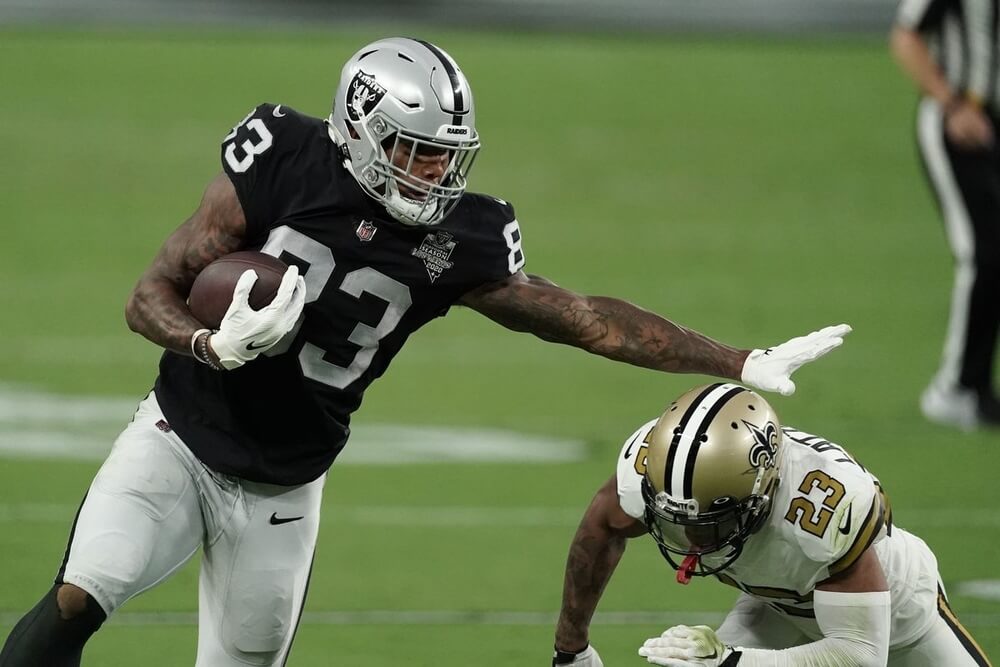 Our Las Vegas Raiders 2022 Fantasy Preview gives you the run down on the teams outlook going into the season. The Raiders have opted to change coach, bringing in long-time Josh McDaniel as head coach.

The team also opted to make a big trade, bringing in one of the best receivers in the league Davante Adams. In a division that seems like they are all deciding to go all in, the Raiders are going to be looking to put up fantasy scores.

Carr has been disrespected for fantasy for a long time. A safe option if you need a streaming option, but not quite good enough to feel like you can draft him.

This season I feel like that is going to change. The running game has question marks around it, while the receiving game has been strengthened. With an offensive-minded coach, he should be able to take a jump into being a decent QB1 option.

The Raiders backfield is somewhat up for grabs. You can throw out what happened previously on the team. The coaching staff are from New England, which has a history of using a committee, and there have been no signs of long-term commitment on the veterans that are on the team. You also can’t discount the fact that letting Ingold go, who was a great backfield blocker, is likely to hurt the overall efficiency of the backfield.

Veteran, and current lead, Josh Jacobs hasn’t had his fifth year option taken up by the team, meaning this is (currently) his last year with the team. During his time with the Raiders, he is yet to play a full season, and hasn’t really been efficient with the workload that he has been given. With the fact that we have a new coaching staff, who have shown they are happy to use a committee, we could see less of a workload than in previous seasons.

Zamir White would have been drafted earlier if it wasn’t for the fact that his knees were a concern. He is talented, and at his ADP gives you a cheap ticket to a backfield that is up for grabs. With Drake, it’s hard to really see a way that I want to draft him. With Jacobs and White on the roster, the early down work is likely covered. And with a multitude of receiving weapons, there isn’t likely to be alot of spare targets.

The move to bring Adams onto the roster is a huge shake up. A player of his ability is going to expect (rightly) to have a healthy target share. Linking up with long-term friend Derek Carr, he could well just pick up from where he left off with the Packers. Sure, he is getting a downgrade in QB, but Carr is more than serviceable having supporting multiple fantasy relevant receivers previously.

Renfrow is the interesting player on this roster. He had a great season last year, of that there is no doubt. The issue becomes if he can repeat that. When he achieved that, the team didn’t have any recognised ‘lead’ receivers. It’s unlikely he is going to have that same number of targets, or truly anything like it. He is behind Adams and Waller in this offense on targets easily.

Then there is the other guys on the roster that are going to steal away some production. Demarcus Robinson has been brought in to add as a deep threat for the team, while Mack Hollins and Keelan Cole are going to play bit-part roles in the offense.

At current cost, I’d only be comfortable with drafting Adams from this group.

Drafting Waller is all about where you are able to get him. He isn’t in that top group of TEs, but is just below. The reason is knowing which version you are going to get.

Waller broke out in 2019, where he caught 90 passes for over 1,100 yards, but only 3 TDs. The next season, he better every statistic, most notably TDs. Last season, it reverted closer to his 2019 season but he missed time too.

With Davante Adams now in town, the target share is going to be up in the air, even more so with a change in coaching. However, Waller should still be given a healthy share of targets in the offense. As I said, the true value of this selection is really going to depend on what round you can get him in. At the moment, he feels too expensive for me, but that is also because I have a number of cheaper TEs I like this season.