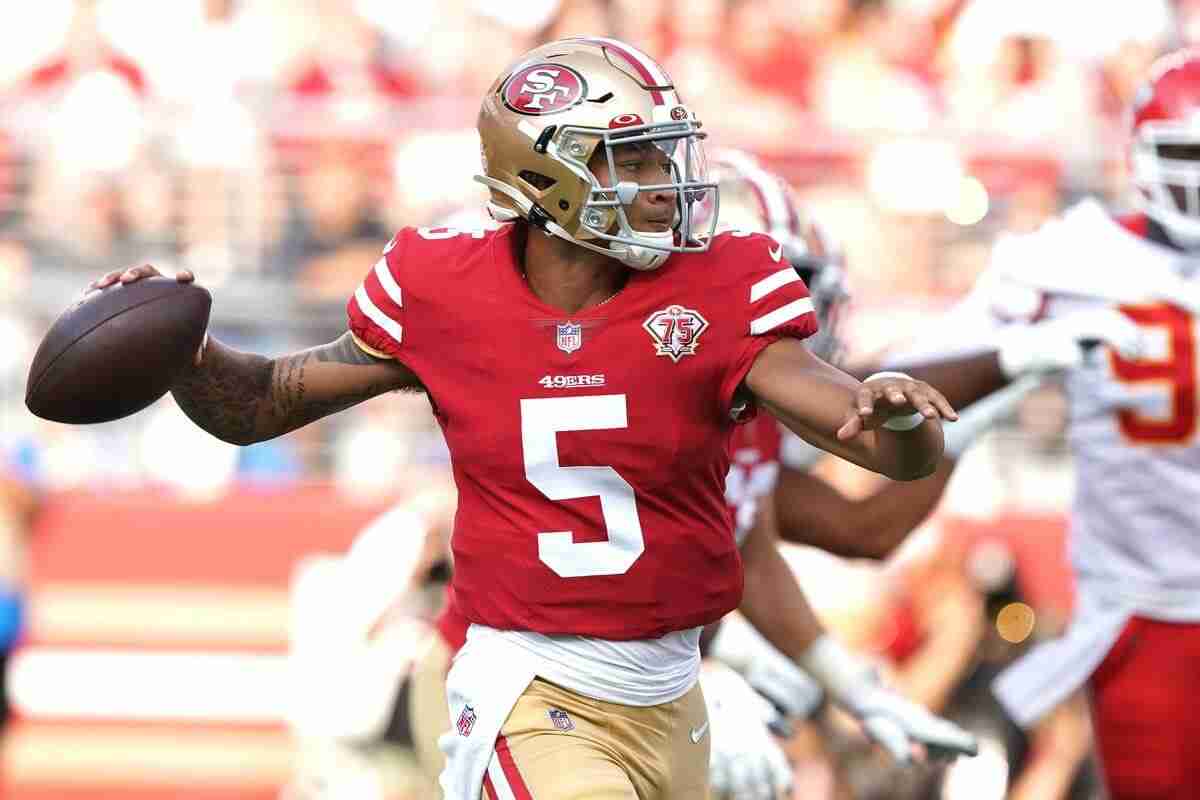 Welcome into Week 1 of the 2022 season, and the latest in our Start ‘Em Sit ‘Em series. I hope you’ve had a great season, and made the playoffs where you expected to. Kicking off the season, all the guesswork ends. Instead, we get real games to analyze and see where we went right/ wrong.

Rodgers fantasy value really took a hit this offseason after the team allowed Davante Adams to leave the team, but you shouldn’t doubt him too much. The Vikings defense isn’t exactly a dominant unit- and Rodgers loves making statements in divisional games. He is a fine play

Winston is a streaming option if you need one this week. Facing a poor Atlanta defense, he has a full complement of weapons too. This version of Winston too isn’t the absolute gun-slinger that we saw in Tampa- he is a little bit more reserved and less-prone to turnovers.

I put Lance last because, let’s face it, everyone is excited to see what he becomes. Chicago allowed one of the highest totals to the QB position last season, and Lance as we know has the ability with his legs to move the ball. Lance has a high ceiling week to week in this offense- go for it to start the season.

I get it, you drafted Fields as a breakout QB candidate- but this is the game to start him. The 49ers defense was rough against the position last season, and the Bears offensive line isn’t a strong unit. It’ll be a long day for Fields for Week 1

The narrative for this game is great. Mayfield welcomes his old team and wants to make a point. The issue is that the Browns defense is one of the best units in the league and equally will want to make a statement. The Panthers offensive line struggled last season, and the Browns defensive line….didn’t.

Edmonds feels almost matchup proof. The Dolphins backfield is his, especially the pass-catching work. The Patriots too struggled against pass-catching RBs last season. With the defense having to also deal with the talents of Tyreek Hill and Jaylen Waddle, Edmonds should see plenty of work underneath.

Dillon was drafted as your RB2 most likely, and you can start him as such this week. The Packers receivers have been hit with injury, so we may see Jones being used as a receiver a few times this week. Even if he isn’t, Dillon is likely to see the field a good amount, and the Vikings defense didn’t do much to stop RB production last season.

Pierce comes into the start of the season with alot of hype from preseason. If he was on any other roster the hype would be ridiculous. But, as a result of being on the Texans, he is going to be a volume play with upside. Even against a tough Colts defense he is going to be an RB2 (low-end) this week.

Penny finished the season strongly, and while the offense is clearly not going to be the same, is going to lead the backfield for Week 1. Penny is a volume play RB2, as rookie Kenneth Walker isn’t going to be handed the reigns to the offense with the time he missed. As a result, even against a tough Denver defense, Penny is an RB2.

Dobbins could prove himself to be a league winner this season, but Week 1 isn’t going to be it. He could play some part in this game, maybe fall into the endzone for a score, but the signs at the moment aren’t positive heavy involvement. The team brought in Kenyan Drake recently, and are likely to pair him with Mike Davis to start the season.

If you have a different RB2 option I think I’d go for it. I don’t know how this split is going to be for the New England backfield. I’ve personally been on the side of Rhamondre Stevenson this season with the positive stories from camp, to the point I think I’d start him with the pass-catching work. I’m just not sure how much early-down Harris is going to get in this timeshare.

Thomas is set to return to the field after missing most of the last two seasons. Thomas has more competition for targets on the roster than in 2019 when he DOMINATED. But that could aid him, with defenses being kept honest having to deal with the threats of Chris Olave and Jarvis Landry along with Alvin Kamara.

But this Falcons defense is among the worst in the league, and a perfect opportunity to shake off the rust.

The Jaguars offense has plenty of questionmarks over it. But if there is one part that is likely to see the ball consistently, it has to be the player that they brought in on a huge contract. In PPR leagues especially, Kirk is a solid WR3 or flex play.

The Vikings offense should be a good unit this season, with a new coaching staff in place. The Packers defense is going to be doing all it can to limit the impact of Justin Jefferson, and Thielen is going to take full advantage. Add in the (annoying) history he has against the team, and he is worth starting this week and is in flex consideration as a mid-level WR3.

The QB change for the Seahawks is clearly significant for the whole team. But, when you consider just how much of Lockett’s value came from his chemistry with Russell Wilson. Well, he is in the game but not on the right side for Lockett. With a tough Broncos defense, look elsewhere.

This is the type of play that I’m going to wait on to see what happens in the opening game. Woods is back from his ACL injury, on a new run-heavy offense. Until I see how he is used, and his ability to play, I’m not going to put him in my lineup. He could blow up, but with other dynamic players on the roster, look elsewhere for this week.

Ertz has a great opportunity to perform to start the season. This offense, as we know, is an effective unit. With veteran receiver DeAndre Hopkins set to miss the start of the season through suspension, there should be more targets for Ertz.

Njoku is one of a number of TEs who could breakout this year. The Browns are going to have alot of pressure on them to get through this period with the off-field issues they have had. QB Jacoby Brissett has a history of targetting TEs, so Njoku is a borderline TE1 for me this week.

Gesicki has always been a TE that has been used as a receiver rather than a traditional TE. But, with the receiving talent the team has now, and reports out of camp, Gesicki is likely to find himself on more blocking duties this season. If he struggles, he might not even be on the field. Against a tough Patriots defense that only gave up an average of 5 points to the position last season, there are better plays.

I’ll stay in the same game for my other sit. There is no doubt that Henry is a talented receiver, particularly in the redzone. That is the issue. He is incredibly TD dependent for fantasy, with over half of his games last season with two or fewer receptions. There are better streaming options available out there.

The Browns defense is going to be causing problems for Baker Mayfield all game. Truth be told, the defensive line is a strong unit and should be able to overwhelm the Panthers offensive line who were among the worst in the league last year.

In selecting DSTs, I’m looking for playmakers. The Eagles added several this offseason, with a nice mix of veterans and rookies. Against what should be an improved Lions team in the opening week they are a fine play if you need a steamer. Let me be clear, the Lions may have improved, but there was alot of room for improvement last year.

The Steelers defense start with a tough ask against the Bengals offense. The Bengals gave up points last season with a number of sacks, but have made improvement in protecting Joe Burrow. With questions over how the Steelers offense overall will perform too, avoid the Steelers.

Another warning for a DST unit that you likely drafted without looking at their schedule. Last season the Cowboys were making plays, leading to TDs from turnovers and finishing top of DST scoring. But, DST TDs aren’t something to rely on. With Brady bringing a strong Tampa Bay offense into town, there are a NUMBER of units that will be plays this week.

Carlson has been a solid fantasy kicker the past few seasons, and he should have a good showing in the season opener. The offense for the Raiders should be able to move the ball, but the Chargers DST are likely to be able to force some drives to end in FG attempts.

Elliott could be a risk for fantasy this week, as the Eagles score TDs rather than being forced to go for FGs. But, honestly, we could see both. Detroit struggled to stop kickers scoring at will last season, and playing in a dome is always a plus too.

My expectation for this game becomes relatively easy for the Saints to control. So when Lutz is on the field, it will be for PATs and not FGs- exactly what we don’t want for fantasy.

I personally think that the Miami offense will be ok this year. I’m just not wanting to go with Sanders this week when there are other players available. The Patriots defense is a solid unit, which limited FG attempts last season. When you put into the mix the fact we could see the Dolphins struggle in their first proper outing with this offense? Avoid.

Well that’s it for our Start ‘Em Sit ‘Em for Week 1 of the 2022 season. Remember, you can check out rankings for each Week. Reach out on social media, you can find us on Twitter, Facebook, and Instagram. Or jump into our Discord server.