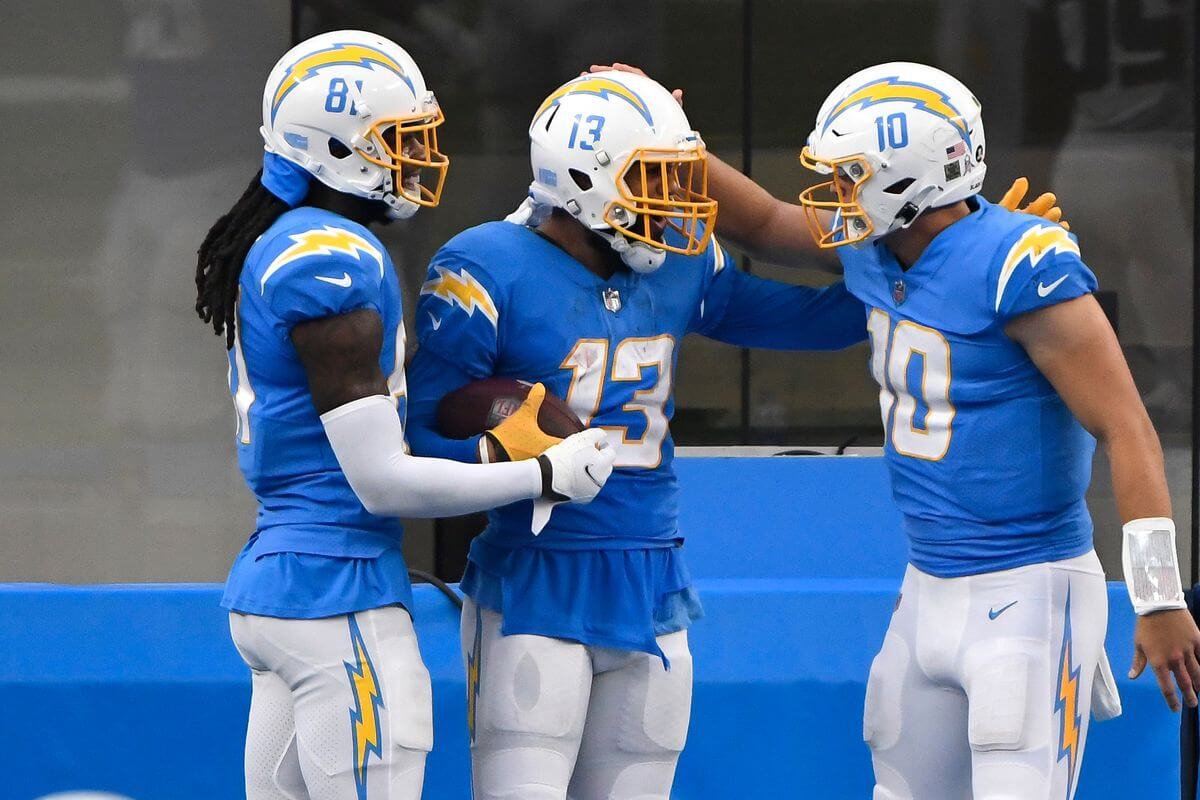 It’s finally here- Week 15 of the 2022 season, and another DraftKings main slate. We are back offering you DFS advice to try and help you navigate your way to victories throughout the season. The players selected here are based on their price, their ability to hit value and likely ownership. The selections are leaning more towards GPP slates, rather than cash (50/50) slates. But let’s get into it

Hurts has been a beast all season, and has a great matchup against the Bears. The Bears defense has struggled to really limit offenses this season, and the Eagles are rolling. The Bears haven’t given up alot to QBs this season, but they haven’t faced a dual-threat like this. If you look at how they have been against RBs, which you should cast an eye over with Hurts, he should be able to put up some numbers. With his high floor due to his rushing the ball, he is a nice option on a slate without Josh Allen.

At $1k less than Hurts, is my favorite QB play on the slate. The Chargers receivers are now (finally) healthy, and the offense is built on moving the ball through the air. In his last three games, Herbert has thrown the ball 145 times. The Titans secondary has been torched all season, giving up 23.8 DKPts on average to the position (second highest in the league). I love both receivers in this one too as good stacking options.

Dalton is a real value selection on the slate. The Saints offense should be able to find itself in positive field position, as their defense cause all types of issues on defense against rookie Desmond Ridder. With the struggles that Atlanta have had in the secondary, with a top-10 19.5 DKPts given up to the QB position, you can put him in and feel ok about it.

Fantasy football, and DFS, doesn’t always need to be hard. The Chargers defense are one of the worst in the league at defending the RB position with an average of 27.7 DKPts to the position. Henry is a human wrecking ball, who is handed the ball constantly. If you can, slot him in your lineup.

Sanders is fantastically volatile to play- perfect for GPPs. He has had two of his last three games at 31.5+ DKPts, and faces a Chicago defense that has allowed 27.7 DKPts on average to the position, one of the worst marks in the league. I mean, we could just see Jalen Hurts do the running on the ground, but Sanders has a good chance at having a ‘pop’ game. Again, to stress the point, you can’t use him in your cash lineup with confidence though.

Etienne is going to be faded by alot of the field, with a tough matchup- totally understandable. But, as the Jaguars will look to protect their QB from the pass rush, I can see alot of carries or dump-offs for Etienne. I’m not going crazy with him, but I’ll sprinkle him in some lineups.

The Texans defense is a unit that I’ve targetted all season, and Pacheco has been getting plenty of touches in the offense. I can weirdly imagine that Pacheco isn’t massively owned as people look to stay in the fire with Jerick McKinnon ($5,200). Pacheco should be given enough carries to be a great play, against the Texans who rank last in pretty much every defensive stat on the ground.

The Jets offense has now had three separate RBs come in and look great, which is something to remember for next season. Knight has been given plenty of touches in the offense, with 17 or more touches in each of his last three games. The Lions defense have really started to become more solid upfront, with an average of 21.0 DKPts given up to the position, but Knight has a decent floor here with his volume.

This Chargers duo are a great consideration, you can even include them together on the slate if you have room. The Chargers love to air it out, and the Titans secondary isn’t great. That combination spells upside. Allen has a safer floor, with a high ceiling. Mike Williams is a huge ceiling play with his deep threat. I’m building alot of lineups with this combination.

Jeudy is going to be the primary receiver for Denver, with Courtland Sutton ruled out. Even with Brett Rypien throwing him the ball, I’m fine with adding Jeudy. The target share should be enough to see him hit value, and he has that big-play potential against this struggling Cardinals secondary.

Wilson’s price has finally caught up with his production, and ironically he has the most question marks he has had in recent weeks. The team are going to go back to Zach Wilson at QB, which could hurt the receiver through the air. But, with the form that Wilson is in, the team are surely going to be looking to get him the ball plenty against this Detroit secondary.

Moore is a nice play on the slate, especially in GPPs. The Steelers secondary has been a unit to target all season, and Moore has long been a favored target of Sam Darnold. Moore had a great game in Week 12 before the team went on bye, and he should be able to bounce back against a Steelers secondary that has given up an average of 39.0 DKPts to the position.

We can stay in the same game for another option for similar reasons. Pickens hasn’t been getting a huge amount of targets, but he has been really productive with the ball. The Panthers secondary are another unit that has struggled to limit teams through the air. The Steelers offense ‘stink’ should mean his ownership stays low here.

I’m almost writing up Moore here because one of the Texans receivers has a chance to perform with their price tag. The Texans receivers have been hit with injury, with Brandin Cooks and Nico Collins both ruled out. I’ve probably selected the wrong one, and Phillip Dorsett ($3,300) or Amari Rodgers ($3,200) blow up, but I’ll go with Moore continuing his massive target share from last week. Realistically, you are looking a similar risk/ reward with the trio- at least one should perform against the Chiefs poor secondary who have given up an average of 40.3 DKPts to the position.

This is alot to do with the matchup. The Cardinals have struggled all season to limit TE production. Infact, they have just outright been awful. I don’t mind making the argument for any TE playing the Cardinals as a result. With the talent of Dulcich, this is going to be a (popular) cheap option.

Okonkwo was a suggested play last week and he performed well. With that performance, and this price tag, he might continue to see his ownership rise. With the Titans receivers again thin on the ground, he should be able to get a decent number of targets against this Chargers unit.

This game has lost alot of the it’s appeal after both starting QBs have been ruled out. But, that does mean that Colt McCoy is going to have to deal with the Broncos defense at home. A nice play on the cheaper side.

Now, the matchup isn’t great. Infact, it’s pretty awful. But, the Bears are a cheap option and should be able to make some plays. QB Jalen Hurts has also been sacked a decent amount recently. The price lets you do alot elsewhere.