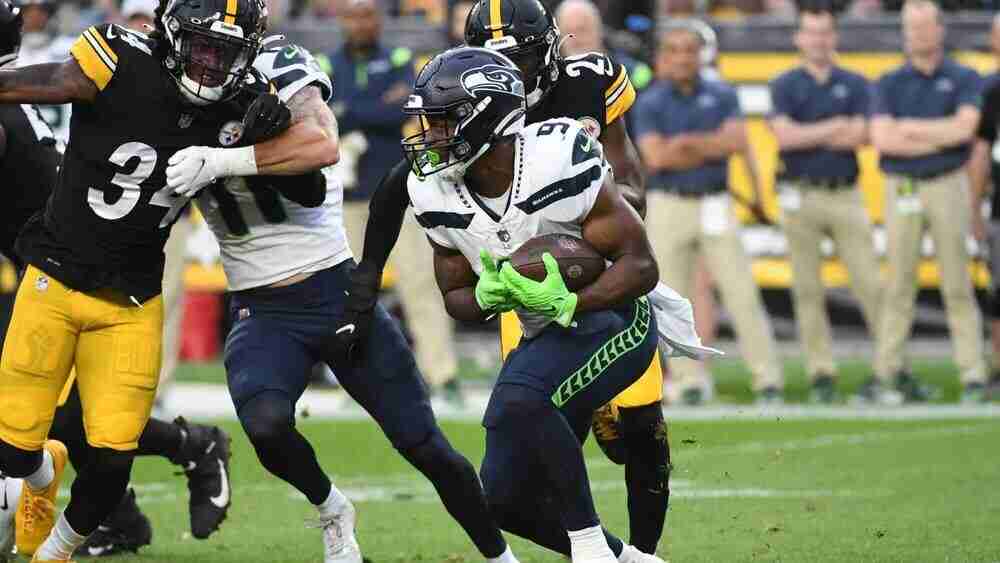 Well we are (nearly) done with another week of 2022 action, so time to finetune your roster with our Week 6 Waiver Wire pickups. Making the right moves on the waiver wire is how you can really win your league. Getting those upside depth pieces, and cutting the players that are going to struggle from your roster is going to help you going forwards

Wentz has been a decent QB to start the season, albeit with two games where he has struggled. Overall though, he stats are great- 3 games with over 300 yards and multiple scores through the air. With the receiving weapons he has, he is a decent option for fantasy owners if needed.

Let Smith cook. Who knew that it was Russell Wilson holding the offense back? I’m only joking, but Smith has been great after struggling to start the season. In his last 3 games he has thrown the ball for 913 yards, 7 TDs and a single INT. With him growing his rapport with both Tyler Lockett and DK Metcalf, things look good for him moving forward.

Walker is owned in just under half of leagues, so just gets included. He is going to be the starter for the team after Rashaad Penny was carted off with a likely season-ending injury. The rookie is going to be given the bulk of the carries in this offense for the rest of the season.

Robinson started his rookie season leading the Washington backfield in carries. This game very quickly became a attack through the air, but Robinson is a nice pickup to see what happens with this team over the next couple of weeeks. This season, as with any, you can’t turn down the opportunity to add a starting RB.

I don’t really want to talk about the snooze-fest from Thursday, but we can talk about Boone. The Broncos backfield is still finding how it is going to be split, after Javonte Williams ACL injury last week. Latavius Murray was signed to the roster, but was inactive for the matchup against the Colts. Worth a stash in deeper leagues. Next up for the Broncos is a Chargers defense that has given up plenty of plays on the ground.

I say I don’t want to talk about, but mention both backfields. Well, each one has some value over it. The Colts backfield was thrown a spanner for Week 5 as the team had to deal without Jonathan Taylor, then lost Nyheim Hines early. As a result, we saw Jackson (12) and Lindsay (11) nearly split carries evenly. Worth considering one of these with the opportunity in the offense.

Anderson left a decent chunk on the field against the 49ers. There is no doubt that the offense is being held back by the struggles of Baker Mayfield at QB, but Anderson still has the ability to convert if given the opportunity.

I’ll quickly say that I’m discounting the Week 4 performance. The offense just got dominated by a tough Eagles unit, and nothing really got done. If you do that, then Jones has had 18 targets in his last two games. With that, he has caught 11 for 137 yards and a score. The Jaguars offense still has a need to throw the ball, so Jones will have opportunity.

The Ravens look like they are set to be without Rashod Bateman for a while yet. The Ravens offense isn’t built to throw the ball often, but Duvernay is able to get downfield which is exactly what the team likes. Against a Giants secondary he could find them suffering from travelling from London.

Moore has finally managed to get out on the field after suffering with a hamstring injury. The Cardinals offense has been moving the ball nicely, and Moore has a couple of weeks before DeAndre Hopkins returns.

Unless there is more news about Beckham in the future, you’ll find him in the others to consider from next week. His knee injury recovery seems to be going well, and he is going to have interest around the league. I’m not expecting him to sign anywhere until November, but worth considering in deep leagues as a stash.

The Colts offense isn’t looking like the unit that was expected to start the season. Matt Ryan has struggled in leading the offense, but that has benefitted Pierce who has been able to get consistently free near the line and make plays. In the past three weeks he has caught 15 passes for 222 yards. Not too bad for a player widely available.

Conklin just falls into consideration. I’m expecting he is going to be dropped by alot of fantasy owners this week after struggling against Miami. The whole volume of offense took a step back though, so I’m not overly worried as the team compete against the Packers on the road.

Henry had his best game of the season against the Lions, nearly doubling his receving stats in a single game. Jonnu Smith forced to the sidelines is a major reason, but with a rookie QB a nice TE safety blanket is priceless.

The Rams defense matchup against Baker Mayfield, who seems like he has forgotten that you aren’t supposed to turn the ball over. With the pressure that the Rams are going to bring, this could get nasty.

I think we could be in a position where you are getting a bonus third week from the Vikings. The Dolphins offense was led by their third-string QB on Sunday. While Teddy Bridgewater was rumoured to have passed his concussion test, he wasn’t able to return to the field. If he is unable to play, the Vikings are a sneaky consideration.

Maher seemed to be able to recover losing his regular long-snapper against the Rams, after struggling in practice. After performing in LA, he now faces an undefeated Eagles roster with the potential return of Dak Prescott.

Lutz recovered well from his double-doink miss in London, hitting all of his kicks. There was only one FG (a long-range kick) as the Saints scored alot of TDs. Against the Bengals at home, Lutz worth adding if you need a bye-week fill-in.