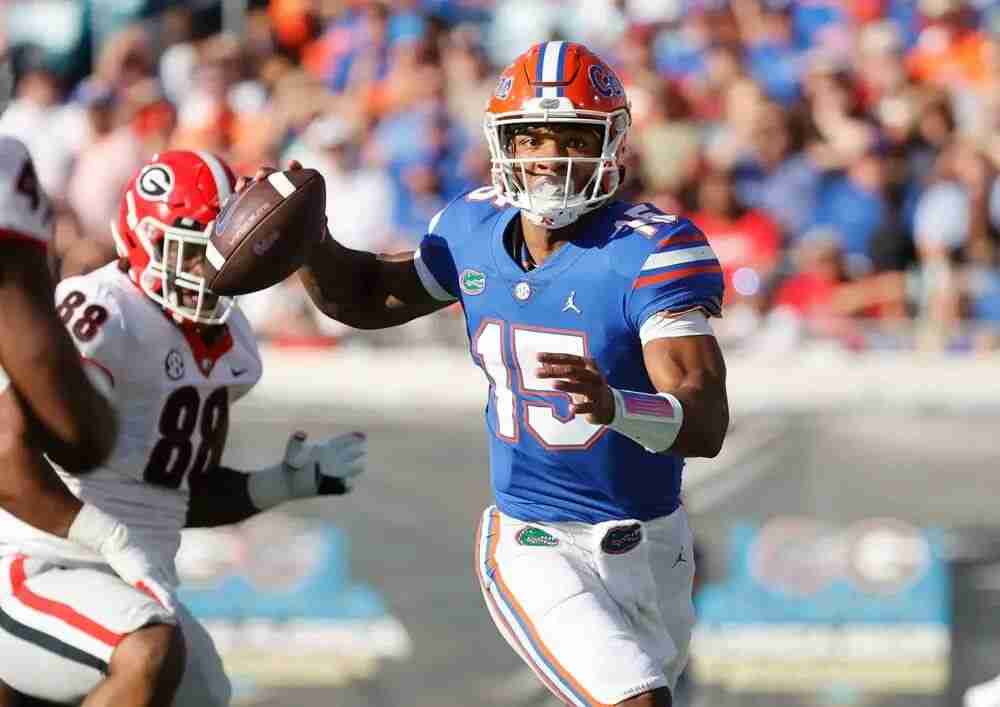 With October halfway through, we take a look at the 2023 Rookie Class and the players that have seen their Stock go down. Some of these fallers could be trending to return for another year of college, but some of these players are out of eligibility. For this year and the next couple of years, until we run out of these players’ extra COVID eligibility year, it’s going to be hard to tell if players have more eligibility to return or not.

We’re seeing a lot of the wide receivers in this class starting to disappoint whether that is from overall offensive woes (Kayshon Boutte) or injury-preventing playing time (Jaxson Smith-Njigba). It’s starting to hurt the depth of this class compared to the beginning of the season you could make a list 30 strong of prospects with high upside. The tier 2 quarterbacks in this class are also struggling which is very important to the health of a rookie class overall, especially in Superflex leagues. Those quarterbacks push down elite skill position players, creating a class that can go 24 selections deep with intriguing players. That’s what made the 2022 draft class feel so lackluster and what made 2021 feel amazing with five quarterbacks pushing down guys like Devonta Smith, Amon-Ra St. Brown, and Elijah Moore later in the draft.

If Richardson were to hit this season, he had the potential to be the top fantasy quarterback prospect in this class with his dynamic dual-threat ability. Last season he was an explosive play waiting to happen when he was splitting time with Emory Jones. It felt like every time he came into the game in a sub-package he was scoring a long touchdown either on the ground or through the air.

This year as the full-time starter Richardson is 61st in QBR, very average in EPA per play at 0.41, only completing 55% of his passing attempts, and has more interceptions than passing touchdowns. Disappointment might be an understatement as he’s had a good game here and there, but overall it’s not looked good. His future is up in the air at this point without a major change in this second half of the season. Is he still even a draft prospect if things don’t improve? It’s concerning for sure if you’re invested in Anthony Richardson in a devy or Campus2Canton league.

I’m grouping these two because they were two up-and-coming players that had a very impressive 2021 season. Both players looked like great candidates to fill out the second tier of quarterbacks in this class behind both CJ Stroud and Bryce Young. But both have been disappointing and would be lucky to be a Day 2 pick at this point. While both have not been impressive it’s not all on them as North Carolina State runs an archaic offense and constantly leans on Leary to bail them out of 3rd and long. And then Miami has no healthy wide receiver of note for Van Dyke to throw to.

That being said, both of these players should elevate their respective offenses if they want to be considered a top-tier college quarterback deserving of legitimate draft capital. They’re both trending like they’ll be back for the 2023 season based on their performance this year, unfortunately stripping some quarterback depth away from this class. And I wouldn’t be surprised if either of these quarterbacks returns; they aren’t back with their respective teams in this transfer portal era.

I almost didn’t want to include Njigba in this list because he’s been out or limited in his game action due to an injury to start the season. And even then, I don’t think his NFL Draft stock has been greatly impacted, maybe a couple of picks but nothing significant. But I wanted to take this section to also talk about how impressive both Emeka Egbuka and Marvin Harrison Jr. have been. Both players are already over 500 receiving yards with 6 and 9 touchdowns respectively, obviously leading the team in both categories.

Ohio State looks to have a revolving door of elite wide receivers and that doors keep on spinning with a look ahead to their wide receiver class this upcoming year with 2 of the top 10 wide receiver recruits per 247Composite. All this to say, I’m not worried about JSN and the future is bright for Ohio State even after Njigba’s departure.

Let’s start this section off by saying that LSU’s offense has been a dumpster fire and Jayden Daniels, LSU’s quarterback, is just not great at throwing the football at this stage in his career. That has trickled down to the pass catchers in this offense, including Kayshon Boutte. Boutte is coming off a fairly significant lower-body injury as he missed the second half of last season and a decent amount of training camp this offseason. Maybe that is still affecting his game now or maybe there is still some tension between Boutte and head coach Brian Kelly as there was some smoke surrounding the two’s relationship this offseason. Whatever it is, it’s concerning that we haven’t seen Boutte dominate the pass-catching volume as he was very clearly a top-end talent that should be able to do so, even in a lacking offense.

He went from a 21% weighted dominator rating his freshman season, which is super impressive to accomplish, to not even 10% this year. On pedigree alone, he’ll still be a top wide receiver drafted in this class, but there is some cause for a bit of concern. Without a bounce-back second half of the season, he’ll be a prospect with a lot more question marks and less confidence in his first-round selection in dynasty rookie drafts and probably the NFL Draft as well.

It seems the days of Burton getting projected as a round 1 wide receiver in the NFL Draft is coming to a close. He’ll still most likely be a Day 2 selection unless something drastically changes one way or the other. He was already on the fringe of day 1 or 2 with some staunch supporters, including myself.  But we’d need a significant uptick in production to the last half of the season for Burton to be considered a 1st round pick again. While I didn’t expect him to be the next Jameson Williams transfer success story,

I was expecting him to be Young’s top option and a reliable outlet on a team full of unproven and young pass catchers. This pass-catching group has been a committee with talented four and five-stars across the board as Alabama has been for some time now. Traeshon Holden, Ja’Corey Brooks, Jahmyr Gibbs, Jermaine Burton, and Kobe Prentice are within 200 and 225 receiving yards, and all except Prentice have 3 or 4 touchdowns. He’s still got time to recover, but as of now, it’s been disappointing for sure.

This article is coming on the heels of Johnston going off against Kansas and Oklahoma State in back to back weeks where he put up 14 receptions, 206 yards, and a score on 16 targets and 8 receptions, 180 yards, and a touchdown on 14 targets. This was a stark difference from what he’d accomplished in the previous 4 outings and gives us a glimpse of what Johnston could do. He’s a hulking 6’4” and 193lbs and a freak athlete that many analysts have fallen in love with. But in the games leading up to his blowup game, he didn’t have more than 4 catches or 50 yards in a single game and had been held scoreless. My main issue with Johnston coming into the season was the lack of consistency as he’s shown these blowup games in the past but hasn’t been able to string together consistent performances. While this game has cooled the worried analysts, this needs to be a turning point where he maintains consistency for the rest of the season. I’m not necessarily asking for double digit targets and nearly 200 yards every week, but multiple games with under 30 yards isn’t going to cut it.

With the departure of Jahan Dotson, Parker Washington appeared to be the heir apparent to lead this team in receiving categories. Coming off the heels of an 800+ receiving season playing opposite Jahan Dotson, it felt like the stars were aligning. Sean Clifford, Penn State’s quarterback, was back for his second season under offensive coordinator Mike Yurcich, and Jahan Dotson was off to the NFL.

While he is leading the team in receiving yards and receptions, he isn’t dominating the pass-catching targets as we expected. Two other pass catchers are within 60 yards and 5 receptions of Parker Washington in tight end Brenton Strange and transfer wide receiver, Mitchell Tinsley. In each of the past two years, Washington has regressed in his weighted dominator rating, a metric that represents a player’s percentage of the team’s total offensive production, going from 24% his freshman season to 22% last season and currently sitting at only 18%. It might be trending toward Washington pushing his NFL Draft declaration date back a calendar year.

We all knew that Rakim Jarrett was going to be a stud and probably the leader of this wide receiver room going into the 2022 season. But we also knew this Maryland offense would be high-powered and believed that Dontay Demus would be able to coexist in this offense and maintain his draft stock. But through 6 weeks, Demus has been a ghost in this offense. He’s 7th on the team in receiving yards and has gone from a 31% dominator rating in both 2019 and 2020 to 12% in 2021 and now barely 5% this season. A 30% weighted dominator rating is great to see in a prospect and shows how much of the team’s offense the player is contributing. But at this point, Demus will be lucky to be a Day 3 player and is most likely an undrafted free agent with minimal devy value. I was hopeful for a bounce-back season to add to the depth of this class, but it seems very unlikely at this point. He’s a fifth-year player already as well.

Gilbert was the ultimate upside-hopeful player this season. He has the physical tools and ability to be a Kyle Pitts Lite type of game-changer and could have given this draft class some much-needed top-end depth to the tight end position. But he’s been a non-factor in the Georgia passing attack and an afterthought for most viewers thus far. He might still get drafted on physical ability alone, or we could see him return to college for another year. But even if he does return, Brock Bowers is assumed to be the focal point of not only the tight end room but the offense as a whole.