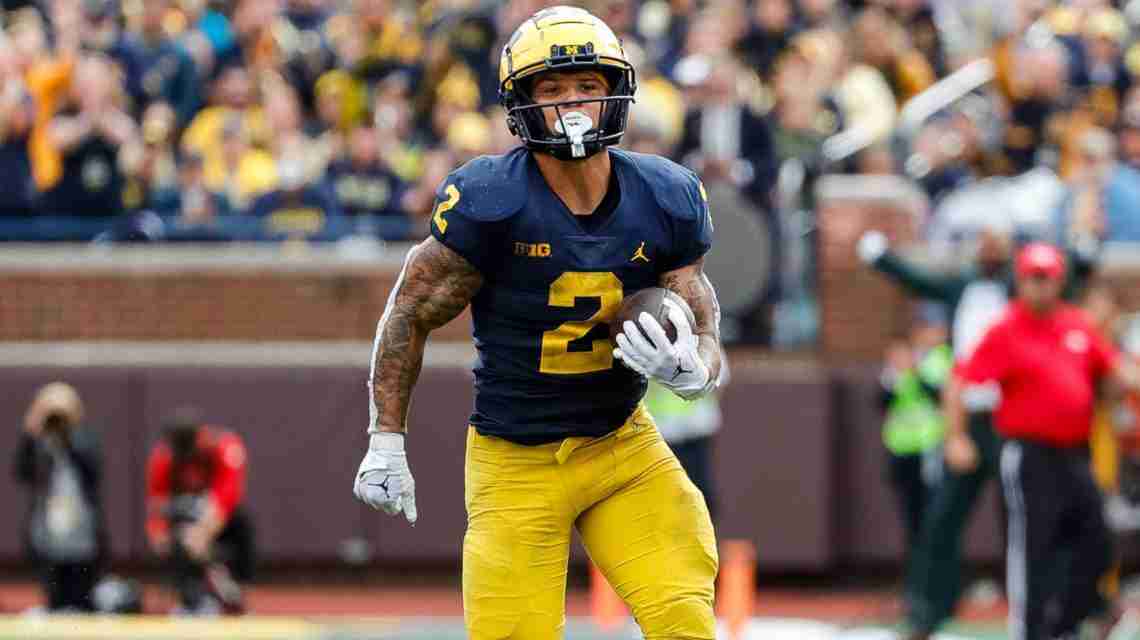 We’ve concluded Rivalry Week in the 2023 college football season, so time to check in with the upcoming rookie class stock as of November. As teams prepare for their conference championship games, bowl games, and even the college football playoffs, it’s a great time to look at who has increased or decreased their future dynasty rookie draft stock. For the Risers section, we’ll only highlight players with a high likelihood of declaring for the 2023 NFL Draft and in your 2023 rookie drafts. For the Fallers, there might be a couple of players that are trending to return to college instead of declaring for the 2023 NFL Draft as maybe we had assumed towards the beginning of the season.

Note, the running back group is a Riser as a whole, but I highlighted just a couple of players due to the article’s length. I could have also included guys like Eric Gray, Zach Charbonnet, Kendre Miller, etc. This running back group is going to be the meat of this draft class. They could provide usable prospects all the way down to the third round depending on how many of these players declare for the draft this year or hold back into the 2024 class. Additionally, Fallers for this class can mainly be attributed to the lack of quarterback depth in this draft class. Outside of Bryce Young and CJ Stroud, there is nothing but question marks, guys that will probably hold off for another year due to a disappointing season, and/or injuries. Hopefully, this will give you an early idea of who you’ll be targeting with those highly regarded 2023 rookie draft picks this upcoming offseason.

I’m not sure if there is anyone else that has helped their draft stock more than Blake Corum. Corum was a watchlist guy for, I’d assume, most analysts. But now he’s solidified himself as a notable draft pick in upcoming 2023 rookie drafts. Despite going down with an injury against Illinois, he went 8 straight games with over 100 yards rushing and at least one touchdown. In fact, before the game against Ohio State, he had at least one touchdown in every game, including a 5 touchdown game in week 3 against UConn. He’s been a dominating rusher with 1.84 yards per team play and a 27.4% dominator rating.

The biggest question mark that we’ll see once again this year, is the lack of passing game production. Both Kenneth Walker and Blake Corum have a ~5.3% reception market share in their final college seasons, indicating that they both did not demand targets out of the backfield. We’ve seen Kenneth Walker start to overcome that this season, although he’s not quite the dynamic receiver out of the backfield. It’s not a nail in the coffin, but will absolutely be a topic for Blake Corum throughout the offseason. That being said, probably not as much as Walker as I still don’t see Corum as a 1st round pick in rookie drafts, so that concern will be mitigated by the draft cost to acquire Corum.

Jahmyr Gibbs and Tank Bigsby are the only SEC running backs to lead their team in both rushing yards, attempts, and receptions. While Bigsby isn’t necessarily known for his receiving prowess, he’s put on tape his ability to be a threat in that part of the game. Since the firing of Bryan Harsin, Auburn’s interim Cadillac Williams seems to be utilizing both of his running backs in creative and more efficient ways. There was a stark difference between Tank’s rushing averages with Harsin this season vs with Cadillac’s short stint at the end of the season:

Notably, Cadillac increased the usage of Tank by about 4 touches per game, while increasing his rushing yards to almost 100 yards per game. Tank has always been looked on fondly since his time entering the college football landscape, and a lot of the blame for his disappointing season last year was already slightly attributed to Harsin. His stint in the last four games I think is enough to rehab his draft capital in both the NFL Draft and in rookie drafts.

Chase Brown has quietly been excellent this season for a Fighting Illini Team that has looked better than they have in a long time. A big part of that has been because of Chase Brown as he has topped over 100 yards from scrimmage in every single game this season. He’s getting it done through the air with 27 receptions, 240 yards, and 3 touchdowns as well as on the ground with 328 carries, 1,643 yards, and 10 touchdowns. He has solid size at 5’11” and 205 lbs which isn’t quite prototypical size, but very close with a build that looks like he could add some good weight. He is a fifth-year player who will already be 22 when he is drafted, turning 23 late into his rookie season. He may not be a marquee player in this draft class, but is a great depth player that will have a lot of upside as a late 2nd/3rd round rookie draft pick depending on the landing spot. I can see Brown being an analyst-favorite target after the top tiers of players have gone throughout the offseason.

Hyatt is having by far the best season of his career and has done wonders to his draft stock. His breakout season with 67 receptions, 1,267 yards, and 15 touchdowns thus far this season is coming on the heels of the 6-game absence of Cedric Tillman who was assumed to be the alpha wide receiver for this team at the beginning of the season. He’s an explosive play waiting to happen, as put on display with his 18.9 yards per reception and seen constantly throughout the year, most notably against Alabama when he racked up 207 yards and 5 touchdowns on just 6 receptions. He’s put up at least 5 receptions in all but 2 games this season, even in games that he has played next to Cedric Tillman. He has an impressive 33.99% weighted dominator rating and over 3 receiving yards per team pass attempt.

He’s only a junior and could decide to return for his senior year to have the receiving room to himself without Cedric Tillman, even though he has been out/limited for a large portion of the season. But this explosion, I think, is the perfect stepping stone he needed to boost himself into legitimate draft capital. And this wide receiver class needed some depth after the top names. He’ll have some questions as a one-season wonder in the product of a college-style offense that manufactures offensive outputs. But, if he declares and gets solid draft capital, I expect him to be a second-round selection in rookie drafts.

There were always questions surrounding Hendon Hooker with his age and production in an offense that notoriously is not conducive to NFL production. He was going to have to sit and learn how to play in an NFL offense regardless, and I’d wager a lot of teams would not want to invest early draft capital when they have to wait on a prospect that will be 25 when he is drafted. With the addition of a torn ACL, he won’t even be able to get reps with his NFL team during practice or the offseason through at least his first spring training, OTAs, and some time into the season. That injury might well have knocked him out of Day 2 consideration in the NFL Draft, where he was already hanging on by a thread.

He was probably already out of the main running for the Heisman following the loss to South Carolina, but missing the final game against Vanderbilt and the upcoming bowl game, he’s out of contention for the Heisman. While the Heisman shouldn’t have an impact on his draft capital, it would have driven media attention and might have been helpful in making a case for his selection. When this class needed some quarterback depth, Hooker has fallen down to late 3rd round/4th round dart throw range in dynasty rookie drafts.

Levis has taken a significant step back this season in pretty much every efficiency and production metric. That’s somewhat expected as he lost Wan’Dale Robinson and has been relying on mostly freshman wide receivers Barion Brown and Dane Key. But the dropoff has been stark from fairly mediocre numbers already:

I have been out on Levis all season and offseason despite the media hype that has followed him all year long. I never saw the appeal despite the tools that he displayed, but he could never consistently put it together. He didn’t take the step forward that I needed to see this season to get on his bandwagon. I don’t believe he can return another season as he redshirted his freshman year in 2018 and this will be his fifth total year in the league (leaving some potential room to return due to COVID rules). I’d be surprised if Levis is more than a late Day 2 pick in the NFL Draft, but he could get pushed up due to positional need and NFL Teams drooling on the intangibles. Although he might have dampened that luster this season. But for fantasy, he’ll be a huge long shot and shouldn’t go sooner than round 3 still depending on draft capital.

We all knew Michael Mayer was the staple of this tight end group, but seemingly nobody has taken the step forward to fill out some depth in this tight end class. There were some hopeful names like Jaheim Bell, Brant Kuithe, and Arik Gilbert. But Bell has become a glorified fullback with more rushing attempts than receptions. And Arik Gilbert did not take any step forward in his second season with Georgia, posting only 2 receptions for 16 yards and a touchdown. There’s no doubt that he will be returning to college, but the star tight end for Georgia, Brock Bowers, isn’t going anywhere as he still has one more year before he can declare. I’m not sure Gilbert has a path to repairing his once highly thought-of draft potential. Kuithe is another intriguing name, but he is undersized and one-dimensional. Additionally, he has missed much of the season due to an ACL injury.

Speaking of the Utes, Dalton Kincaid has stepped up in his absence with a more prototypical tight-end build and excellent receiving abilities. Kincaid might provide some depth similar to other late-drafted tight ends we’ve seen with upside in fantasy (Brevin Jordan, Greg Dulcich, etc.). Sam LaPorta is another name to keep an eye on as seemingly the only bright spot in the Iowa offense.