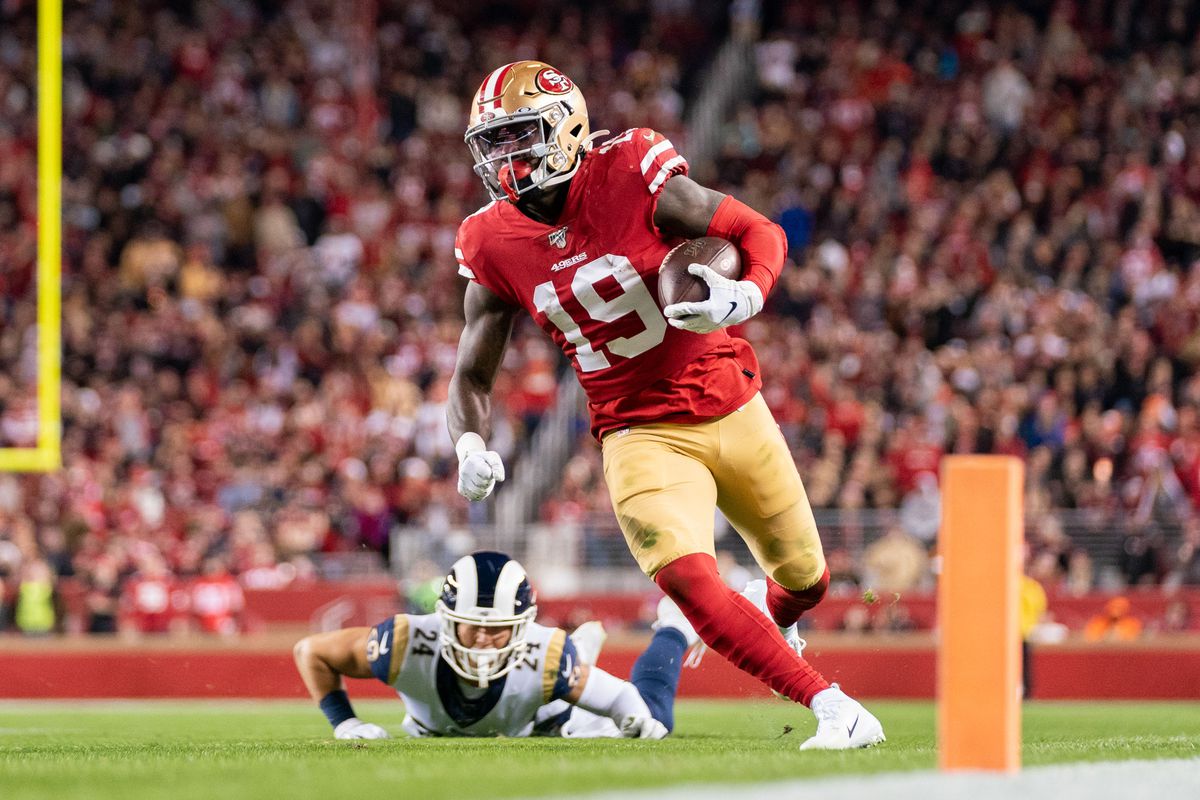 Are the Sophomore Wide Receivers Worth the Hype?

Generally, a 35% college dominator rating is elite, 20-35% is decent, and less than 20% is concerning. These ratings are the college player’s percentage of their team’s receiving production. Breakout Age is the college player’s age prior to the season where they show a college dominator rating of at least 20%. A good example of breakout age means a player with a younger breakout age. Let’s see if these second year wide receivers are hyped or overhyped.

Are the Sophomore Wide Receivers Worth the Hype? Tier 1 – Provide WR2 Production with WR1 Upside (800 receiving yards or more in 2019)

Deebo Samuel’s the number one wide receiver on the San Francisco 49ers. One concern would be the low volume passing game ranked 29th in pass plays per game. Positives – his catchable target rate ranked sixth and yards after the catch ranked fifth. He produced WR3 numbers as a rookie in fantasy points per game ranking 34th. His NFFC ADP is at 64 which makes him the 25th receiver off the board in between Stefon Diggs and T.Y. Hilton.

Are the Sophomore Wide Receivers Worth the Hype? Tier 2 – Provide WR3 Production with WR2 Upside

The positives – the Giants ranked seventh in pass plays per game. The concerns would be competing for targets with possession receivers like Sterling Shepard and Golden Tate. Slayton ranked as the tenth most efficient wide receiving based on Player Profiler’s production premium metric, which could mean efficiency regression. He’s also volatile with seven games with 50 or more receiving yards and six games with less than 33 yards.

Slayton’s NFFC ADP is 110 as the 41st wide receiver off the board. His teammates, Shepard and Tate, are going 20-50 picks later. However, Slayton could take a step up in 2020 as he tied for 11th in average targeted air yards. That ranked him in between Stefon Diggs and Curtis Samuel in that metric.

Marquise Brown’s a smaller dude listed at 5’9” weighing 166 lbs. Brown had a similar prospect profile as teammate Miles Boykin in terms of college dominator rating and breakout age. Yet we know that Marquise Brown had amazing stretches in 2019. In the first two weeks, he exploded onto the scene with 18 targets, 12 receptions, 233 receiving yards, and two touchdowns. Volatility’s a way to describe Brown’s season, as he had three games of 80 yards or more and 11 games with under 50 receiving yards. In seven of those eleven games, Brown didn’t reach 23 receiving yards.

Brown missed a few games in the middle of the season due to injuries and seemed to get banged up quite often. His 59% snap share on the season ranked him 102nd at wide receiver. However, we know Brown can be a game changer with his speed even without full time snaps. Brown’s 15.2% touchdown rate is probably unsustainable with the lower volume Ravens’ passing game. Only four other receivers with seven or more touchdowns had a higher touchdown rate: Adam Thielen, Darius Slayton, A.J. Brown, and Kenny Golladay. That’s pretty good company.

The Ravens’ low pass-to-run ratio of 44.2% – 55.8% shows evidence of the low volume. In terms of efficiency, Brown ranked 21st in production premium, yet he ranked 70th in total receiving yards. Brown’s NFFC ADP is 85 as the 33rd wide receiver off the board. That ADP seems fair, but don’t be surprised if he gets taken earlier.

Are the Sophomore Wide Receivers Worth the Hype? Tier 3 – Could Provide WR3 Production

The undrafted rookie, Preston Williams, played half the season, and then tore his ACL in early November last year. He was on pace for 64 receptions, 856 receiving yards, and six touchdowns, which would’ve put him in Tier 1 meaning a solid rookie campaign. Williams’ college dominator rating was in the top 10 percent, but his breakout age was a little old. He also had a 34.9% college target share, which was in the 95th percentile.

Williams played a bunch with an 84% snap share and the Dolphins threw the ball a ton as the fourth ranked team in pass plays per game. Williams averaged 7.5 targets per game with a 21.4% target share. He’s the wide receiver two behind DeVante Parker, and the Dolphins will probably continue to throw the ball a lot. Williams’ 161 NFFC ADP makes him the 57th wide receiver off the board. That’s a good value at pick 161 coming off a promising rookie year. On the other hand, keep an eye out on his recovery since he was injured in early November of last year.

Diontae Johnson’s listed at 5’10” weighing 183 lbs, and drafted in the third round out of Toledo. Johnson’s game logs were up and down, which wasn’t surprising with the quarterback issues after Ben Roethlisberger’s season ending injury in week two.

Johnson’s 66.9% snap share ranked 80th at the position and his 92 targets ranked 37th on the season. In his last four games, Johnson had 31 targets, 23 receptions, 257 receiving yards, and two touchdowns. Those 257 receiving yards ended up being 38% of his receiving production. His four game stretch doesn’t jump off the page, but it’s good to see some level of consistency towards the end of his rookie year.

One notable metric – Johnson ranked first in target separation at receiver according to Player Profiler. Target separation means the average yards of separation between the receiver and the closest defensive back when the passing target arrives. Johnson creates separation, which is a coveted skill for receivers and something to keep an eye on in 2020.

Johnson’s 101 NFFC ADP makes him the 39th receiver off the board. It looks like Roethlisberger should be healthy for the 2020 season, which increases the stock of the entire Steelers’ offense. Johnson’s draft price is a bit high, as Christian Kirk and Brandin Cooks are two notable receivers going around him. Kirk and Cooks are preferable and more proven options in this range.

Are the Sophomore Wide Receivers Worth the Hype? Tier 4 – Stash

N’Keal Harry missed most of the season due to an ankle injury last year. His college dominator rating and breakout age were elite, and even his college target share was in the 81st percentile. Harry checked a lot of the boxes to look for in a college prospect. However, it’s probably safe to throw out his 2019 production due to the limited sample size. Harry’s 200 NFFC ADP makes him the 62nd wide receiver drafted. He’s worth taking a flier on at this price with a chance for a potential breakout season. On the other hand, there are question marks at quarterback with Tom Brady leaving, so that might limit his production. He’s also a buy low in dynasty leagues.

Mecole Hardman didn’t surpass 550 receiving yards in college, so he ended up with a college dominator rating in the 19th percentile. He didn’t have a breakout age because he likely didn’t meet the threshold. We know he’s fast with a 4.33 40-yard dash in the 99th percentile. The Chiefs offense may be one of the best in the league, but his volume is concerning. Last year he caught 26 passes for 538 receiving yards and six receiving touchdowns. He only received five or more targets in four games, and his snap share and routes run were at 43%.

In summary, we know Hardman’s fast and could take a catch to the house, but there are other second year wideouts that receive more volume. His 125 NFFC ADP is a bit high for a volatile player that likely won’t receive the target volume.

So what do you think? Are the Sophomore Wide Receivers Worth the Hype?Anyone that you think needs to be added? Reach out to us and let us know, you can find us on Twitter, Facebook and Instagram.