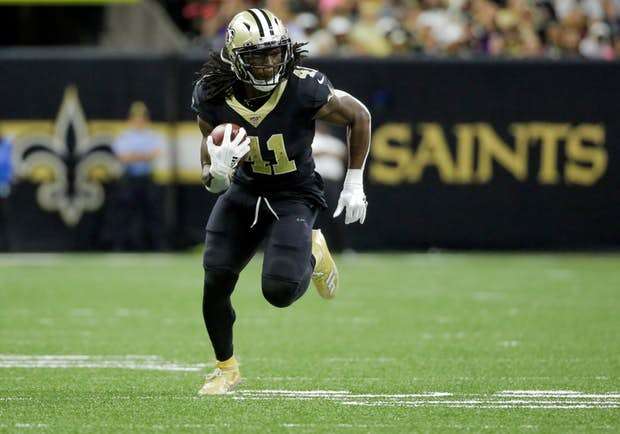 Another week of action in the books means one thing- time for our DraftKings selections for Week 12! Selections this week are tough, with a number of teams on bye week forcing a shortage of options. But, there are always some gems to find.

?The playoff race is here!? Deposit $5 and get a $10 Bonus to play Fantasy Football thanks to our partnership with DraftKings. 18+. www.BegambleAware.org® T&Cs apply https://dkng.co/kingsfantasy

Matt Ryan ($6,700) is the clear quarterback selection for me this week, with a high-scoring game against Tampa Bay. Ryan has been highly effective this season, with Atlanta‘s running game struggling this season. In fact, there has only been one game this season (excluding the game he was forced to leave early) where he was unable to beat the 300-yard mark.

Baker Mayfield ($5,800) is my cheaper option this week. And no, it’s not just because he is playing Miami this week. The headlines from last week were all about the incident with Myles Garrett, overshadowing the fact that the offense were able to keep the Pittsburgh defense in check. Against Miami, Mayfield will be looking to lead the offense to a big game on the road.

Alvin Kamara ($8,200) has not managed to reach the heights of previous seasons, but that’s been down to injury and the team missing Drew Brees for a number of weeks. However, with the other elite options on the slate having tough matchups, he is too good to overlook. Kamara faces Carolina this week, who have struggled against running backs all season. Latavius Murray might cut into Kamara‘s workload, but there should be plenty to go around.

Derrick Henry ($6,900) represents the best of the next tier this week. It’s hard to include Henry each week, as his lack of pass-catching limits his value in the PPR scoring that DraftKings use. However, this week Tennessee faces Jacksonville who has given up the most yards per carry in the league. With the offense heavily reliant on the run, this could be a HUGE game for the running back.

Jay Ajayi ($3,000) is the ultimate home-run option this week. Ajayi didn’t see the field last week after being resigned by Philadephia but with Jordan Howard unlikely to suit up, he could see more the field this week against Seattle. If he is able to see the field, it is unlikely that he won’t beat his value with the cheap price.

Odell Beckham ($7,000) attracted all of the headlines in the offseason after his trade to Cleveland but has struggled to have the same impact he did in New York. The matchup against Miami offers a perfect opportunity for the receiver to get-right.

D.J. Chark ($6,400) has to be inline for breakout player of the year. There was alot of doubt surrounding him coming into the season, but he has silenced the critics this season. Jacksonville are likely to be chasing this game, with Tennessee likely to kill the clock with their effective running game.

N’Keal Harry ($3,300) is another potential home-run play this week. The receiving corps in New England has been hit with injury, with Phillip Dorsett and Mohamed Sanu both looking likely to miss the game this weekend. Harry is a phenomenal talent, and New England may be forced to add him to the rotation this week.

Ryan Griffin ($4,200) may have struggled in Houston, but he is embracing the opportunity he has been given in New York. The matchup against Oakland is a tasty one for the tight end position, and Griffin has a constant red zone threat this season.

Vance McDonald ($3,500) is one of the most interesting options at tight end this week. It’s hard to slot him into all of my lineups as the Pittsburgh offense just hasn’t been that good, but he is one of the only healthy receivers on the roster! JuJu Smith-Schuster and Dionate Johnson are both in concussion protocol and has a decent matchup against Cincinnati this week.

Pittsburgh ($4,000) are the most expensive team on the slate this week, but what do you expect!? They are facing Cincinnati who along with Miami are competing to be the worst team in the league.

New England ($3,300) has fallen from grace it seems, at least in relation to the salary they have been given. You aren’t likely to get New England at this price again, and while Dallas have been a good unit this season, it can’t be relied upon.

?The playoff race is here!? Deposit $5 and get a $10 Bonus to play Fantasy Football thanks to our partnership with DraftKings. 18+. www.BegambleAware.org® T&Cs apply https://dkng.co/kingsfantasy