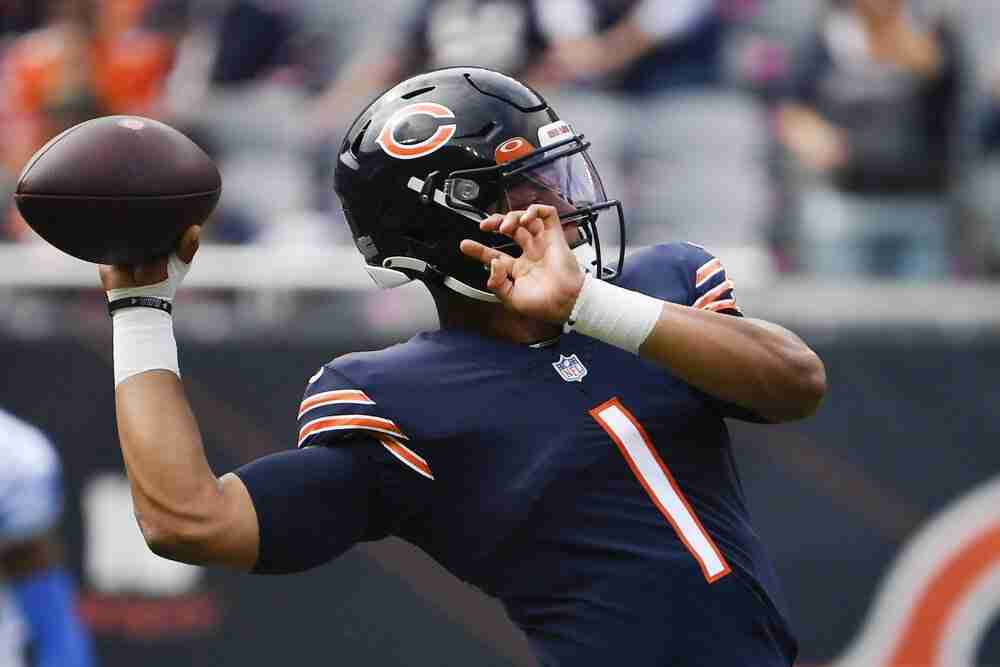 We are here to cover the 2022 DraftKings showdown slate for Monday Night Football Week 7, Chicago @New England. The Bears look to win their first road game as they head to New England. Justin Fields was thrashed around in his last game and aggravated a shoulder injury. Hopefully, the play calling improves (get Fields outside of the pocket and rely on his legs) and the offensive line holds up so Fields can lead his team to victory. If New England wins, this will be Bill Belichick’s 325th win with the team; Mac Jones is back and ready to grab the torch from Zappe. However, the Bears defense is growing into its own and has the ability to generate turnovers. They may find success as Mac Jones reacclimates to his starting duties.

Fields is really shaping himself up to be a poor-man’s Lamar Jackson, as a RB that throws the ball. It’s hard to think of many scenarios with how the game is set to go where Fields isn’t the top scorer on the slate. Even with some turnovers thrown in, Fields should be able to hit value in this one.

Harris missed a game due to a hamstring injury. Before he went down, he was averaging 13.25 carries and sharing the rushing duties with Stevenson. The Bears run defense will give up a ton of fantasy points to opposing running backs so there will be room for Harris to eat even with Stevenson taking a bulk of the carries. With Stevenson’s price-tag, I’m going to be more heavily involved in Harris my lineups.

If Stevenson was the only RB to play in this one (i.e. Damien Harris wasn’t set to return) then this would be a much easier play. As it stands, Stevenson is going to be splitting reps and that means it’s going to be tough for him to live up to the price tag as a CPT. It might even be a struggle as a flex!

Belichick will try to eliminate Chicago’s ability to run the ball. Emphasis on “try”, as they could falter and allow Montogomery fall into the endzone a few times. I’m not high on Montgomery because of his outrageous price in a terrible matchup but his high volume and lower ownership makes him an interesting play.

Jones looks set to return to action this week, after having some weeks out with an ankle sprain. There isn’t alot here for Jones though for me to get overly excited. The Bears secondary is solid, and the best way to attack the defense is on the ground. If this game is turned on it’s head, then Jones could be forced to distribute the ball, but it feels alot more like a ground and pound game.

Meyers has evolved into the “go-to” pass catcher in this offense. Kendrick Bourne and Nelson Agolor missing time has funneled even more targets his way. The Patriots should get an early lead and spend most of the day rushing the ball, so as a result, I will have a limited share of Meyers in my lineups.

Fields will rely on Mooney’s explosiveness as the Patriots will try to shut down their run offense. Mooney is averaging 7 targets over the last 4 games and will be featured a lot in the playcalling. With his speed and ability to make defenders miss, pairing Mooney with Fields makes a great GPP play.

Mac Jones returning is good news for Parker, who has a good connection with him. Parker had his best game when Jones was throwing him the ball, and can’t be discounted as a GPP play with his ability to make big plays, as well as constantly being on the field.

Thornton has benefited the most from the Patriots WR injuries. Last week against Cleveland, Thornton had 4 catches, 37 receiving yards, 3 carries, and 16 rushing yards, while finishing the day with two touchdowns. The Patriots were purposely using Thornton in the game plan and found success. I expect them to continue to utilize him, especially in the run game as the Patriots should have the lead.

Pettis looked great on Thursday, second on the team in targets and leading them in receiving yards. The primary receiver on the offense is Mooney, but we have seen plenty of times where one of the Bears secondary options somehow finds themself in a huge gap and make a play.

Henry is heavily involved in the offense, and has nice TD potential with his size in the redzone. Feels like a nice player at this ‘dead’ price point. Could easily have a nothing game though, but what TE doesn’t have that risk?

If there is a gap in the Patriots defense, it is defending the TE position. Kmet has really not done anything for fantasy this season, but surely that changes at some point? In the ultimate fool me once/ twice scenario I’ll have some lineups with Kmet, who is going to be overlooked by the majority of the field.

Smith, back from injury, will resume his duties from Hunter Henry. I like the Patriots TE as a cheap low owned player that will find Although his volume will be low and the Patriots will run the ball for the majority of the game.

The Patriots DST ($5,600) comes at a high price and high ownership. It makes sense as Belichick should outcoach Matt Eberflus and the D-line should stop the Chicago run game. With how Fields has played this season, there is a good chance of sacks and turnovers in this one. However, I also think the Bears DST ($4,000) is an excellent contrarian play. Jones suffered with turnovers before he was forced to miss some games through injury, and could struggle with rust in this one.

The kickers are priced up this week which makes sense as both teams play at a slow pace. Nick Folk ($4,400) is expected to have more scoring opportunities so I would pick him over Cairo Santos ($4,200). The Bears will struggle to move the ball and will need Santos’s leg to stay in it, so I plan to have both kickers in my lineup. I’m even going to have some lineups with kicker captains.

So, there are our DraftKings selections for the 2022 Showdown of Chicago @New England! Remember any DFS questions, you can check out our articles here. Or you can find us on Twitter, Facebook, or Instagram.

Who will lead Bears-Patriots in receiving yards on MNF? – Powered By PickUp