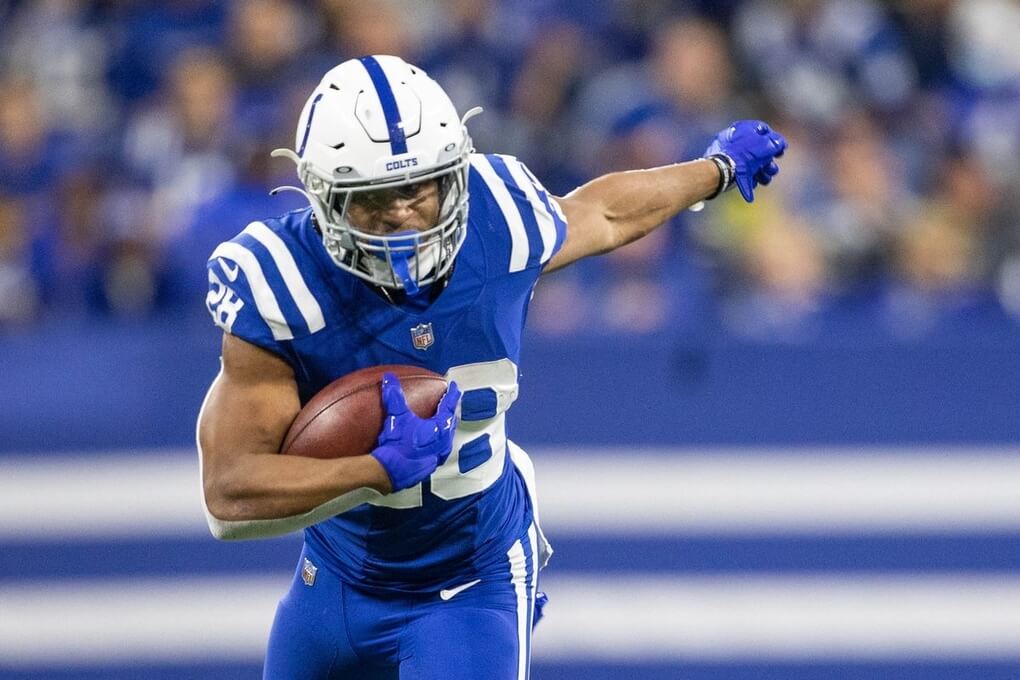 We are here to cover the 2022 DraftKings showdown slate for Monday Night Football Week 12, Pittsburgh @Indianapolis. This one feels like the battle of the volume RBs, with Jonathan Taylor and Najee Harris getting some of the most touches in the league. The O/U is set at 39.5, with the Colts expected to win by around a FG.

Taylor is the highest-priced player on the slate, which is just fine with the opportunity he has in the offense. Playing at home in a Colts offense that has found a way to run the ball again, he is going to be looking at 25ish touches combined with carries and receptions. Hurts lineup construction spending up here, but he is likely the highest-scoring player on the slate.

Ryan could be the key to this slate. If he plays well then it opens up alot of options on the slate, if he struggles then the like of Pittman are going to struggle to do anything of note. The defensive line for the Steelers has definitely been rejuvenated with the return of TJ Watt, but the secondary is still weak. I could see him throwing the ball early to stretch the linebackers and open things up for Taylor on the ground. Not really confident in him as a CPT, but if you go that route, you should look to stack him with a few receivers.

Harris is a nice pivot away from Taylor, but his value comes from a similar place- volume. Harris has had 20 carries in each of the last two games, as the offense looks to stop rookie Kenny Pickett being the deciding factor in games. With his involvement in the passing game too, he has a decent floor and the savings here let you get some other top talent in your lineup.

The Colts secondary is a strong unit, so it’s not immediately obvious to select a WR as CPT. But, Pickens is another cheap CPT play. Diontae Johnson is leading the team in targets and receptions, but Pickens has more TDs and also just 3 yards less. Pickett has developed a good relationship with Pickens, making him a boom/bust play at CPT.

Pittman is being priced at the level that you’d expect a week-to-week top-receiving talent. But he isn’t really in this offense. He has been solid the past few weeks, but he still has only had 2 100+ yard games, and only scored 1 TD this season. Now, the Steelers secondary isn’t a strong unit, and they have allowed plenty of production through the air this season. But, it’s hard to really trust Pittman at this price. I’ll have him in some lineups, but not going to have a huge amount of him in my lineups.

Pickett should only really be considered in GPPs if you entering ALOT of lineups. With how the Steelers have tried to take the ball out of his hands, he doesn’t really have much of a floor at all. He does have sneaky upside though with how he has been happy to run the ball. I mean, on the season he has as many rushing TDs as Harris has.

Johnson started out the season with a decent floor- purely because of targets in the offense. The Steelers offense (at least aerially) has really not been great, and with the targets now drying out for Johnson he doesn’t have that same (safe) floor. Really feels like the offense has moved away from him.

Ah, Parris Campbell. For what feels like seasons he has flashed, and disappeared. But now, it seems like he might be here. He has really been able to enjoy working on the other side of the field from primary receiver Michael Pittman, and for me is a great option in the mid-pricing range.

Freiermuth has carved out a role in the offense- big-body receiver with the ability to break off with the ball. He has been stacking up targets since he returned from injury in Week 7, with 35 targets in four weeks. With just an average of 11 yards per catch, he has a solid floor. If the offense manages to click and start scoring TDs, Freiermuth is a prime candidate to get them too.

Pierce has been hit or miss this season. He had a purple patch of form earlier in the season, but struggled as the team rotated through QBs. Matt Ryan being back has meant that he had 8 targets last week, which is the highest mark since Week 5. Could be a nice option here, overlooked by the flashing lights of Campbell. I’m going to have him in the majority of lineups.

It seems that Kylen Granson is not going to play in this one, which makes the three-headed monster for the Colts down to two heads. Neither of these two get reliable usage in the offense, but with the way they are priced they don’t really need to do too much to hit value.

In some ways it feels like I’m almost forcing myself to find an uber-cheap option on the slate. He has been getting on the field since Chase Claypool was traded away, and Steven Sims not looking great. Has also returned kicks, so a few ways where he could score points, and he needs next to nothing to smash his value.

Unlike alot of showdown slates, I’m actually ok with both DSTs here. For the Colts DST ($4,600) they are a real-life tough defense to play. They’ve got a decent pass rush, and secondary so we could well see Kenny Pickett turn the ball over again as well as get sacked. Equally, the Steelers DST ($4,400) has a strong defensive line that can put pressure on the QB, and Matt Ryan has turned the ball over and been sacked plenty already this season.

The kickers are also both in play, with the pricing and floor they provide. Chase McLaughlin ($4,200) has been pretty accurate for the year, the majority of his misses coming in the 50+ yard range. This Colts offense has stalled plenty of times this season too, with McLaughlin averaging 2.3 FG attempts per game. Matthew Wright ($4,000) has now started two games for the Steelers, but unlike his other games has no weather to consider. The Steelers offense has often stalled within kicking distance, and the team are more than happy to put him out on the field to convert.

So, there are our DraftKings selections for the 2022 Showdown of Pittsburgh @Indianapolis! Remember any DFS questions, you can check out our articles here. Or you can find us on Twitter, Facebook, or Instagram.