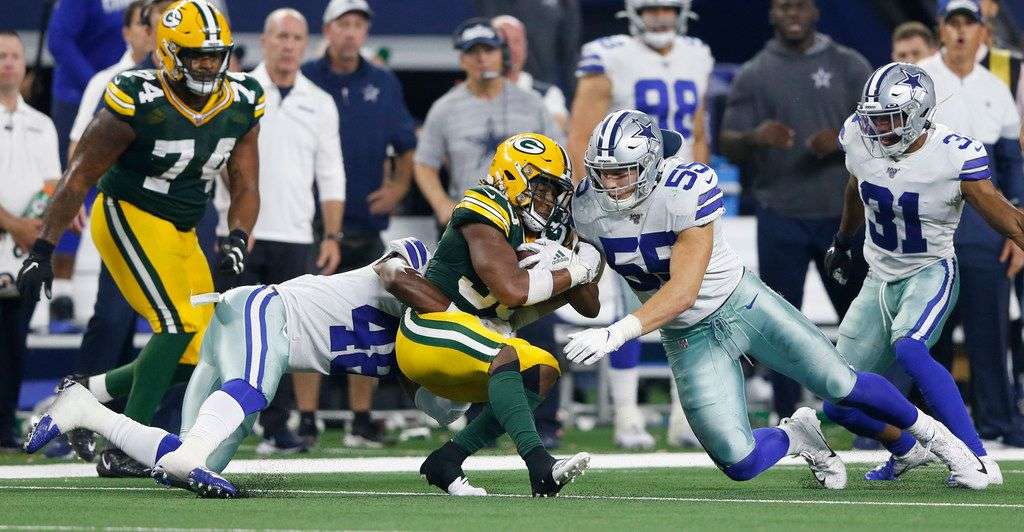 Hello again! Time for some Week 6 DraftKings selections. Last week was certainly one to remember with some outstanding performances (including Aaron Jones run out against the Dallas Cowboys). We also say a return to the NFL in London with an entertaining game between the Chicago Bears and the Oakland Raiders. Hopefully, this week’s game follows suit but let’s get into the DFS picks for this week.

Matt Ryan ($6,400) is a man that is hard to ignore this week. The matchup against the Arizona Cardinals is outstanding, with the Cardinals allowing opposing QBs to throw for 1,420 yards and 12 TDs this season- which is the third-highest in the league. Adding to the matchup, the Atlanta Falcons has struggled for success on the ground, meaning Ryan is likely to continue to put his arm to work.

Gardner Minshew ($5,000) is my pick of value quarterback this week. Aside from the most amazing mustache in the league Minshew has had some great fantasy performances this season. The rookie quarterback has shown he has the ability to lead a passing offense utilizing the weapons around him and has a good matchup against the New Orleans Saints– a team that has given up an average of 24.5 points to the position this season.

Mark Ingram ($6,600) is the easiest selection this week- regardless of position. The Cincinnati Bengals defense has struggled to stop running backs all season, conceding an average of 39 points to position. The Baltimore Ravens are committed to establishing the run with their offense. And Ingram their clear lead option in the backfield, this could be a big week for the veteran.

Aaron Jones ($6,500) has me returning to the well this week. Jones scored four touchdowns last week against the Dallas Cowboys. While the return of Jamaal Williams will reduce the number of snaps Jones sees- it shouldn’t overly impact his fantasy value. The Detroit Lions have struggled to defend running backs this season, giving up an average of 29.9 points to the position. At the price, I’m happy to stay in the flames.

Carlos Hyde ($4,400) was a player I picked up in a lot of different places in my drafts this season. I loved his situation and ability, albeit when he was on the Kansas City Chiefs roster, but mainly I didn’t think he was washed up. Since joining the Houston Texans he has led the backfield in carries. The Texans running back has looked good with the workload too. While Hyde isn’t likely to lead the highest scorers this week, the price allows for more expensive options to be picked up elsewhere.

Stefon Diggs ($5,900) is my first selection this week. Yes, the Minnesota Vikings haven’t passed the ball too many times this season. But they haven’t yet faced a team that is as effective at stopping the run. Equally, the Philadephia Eagles have been ineffective at stopping receivers, giving up 45.7 points to the position. Diggs wide receiver colleague Adam Thielen broke out last week, it’s Diggs‘ turn this week.

Preston Williams ($4,100) is another cheaper option at the position. The Miami Dolphins are returning from their bye week, which should have given the team time to work out how to get the chains moving. Williams has had 30 targets so far this season and should continue to see opportunities against the Washington Redskins defense.

Jamison Crowder ($4,000) is the New York Jet that I ultimately settled on after considering Robby Anderson. However, this pick is entirely dependent on Sam Darnold returning to the lineup. Darnold has missed several weeks with illness and isn’t going to be at his best this week. That could allow Crowder to be his main target on short quick passes, which is where Crowder excels. With tight end Chris Herdon also looking likely to miss the game there shouldn’t be a lot of competition for those targets.

Austin Hooper ($5,000) is my no-brainer selection at the position. The Arizona Cardinals have been totally unable to defend the position, and if Tyler Eifert didn’t drop his touchdown pass that would have continued. Returning to the easiest matchup this week are the Atlanta Falcons and their tight end Hooper. Hooper has emerged as one of the Falcons favorite targets this season, trailing Julio Jones by just two targets this season.

San Francisco 49ers ($2,600) are a team that has looked effective on their defensive line this season. The impressive rookie play of Nick Bosa seems to have kick-started the pass rush. The Los Angeles Rams aren’t the team they used to be, with their offensive line struggling this season. While the Rams have the ability to score a lot of points in any given game, the 49ers could tally enough sacks to give value this week.

Best of luck this week, and if you are at any of the games- enjoy!