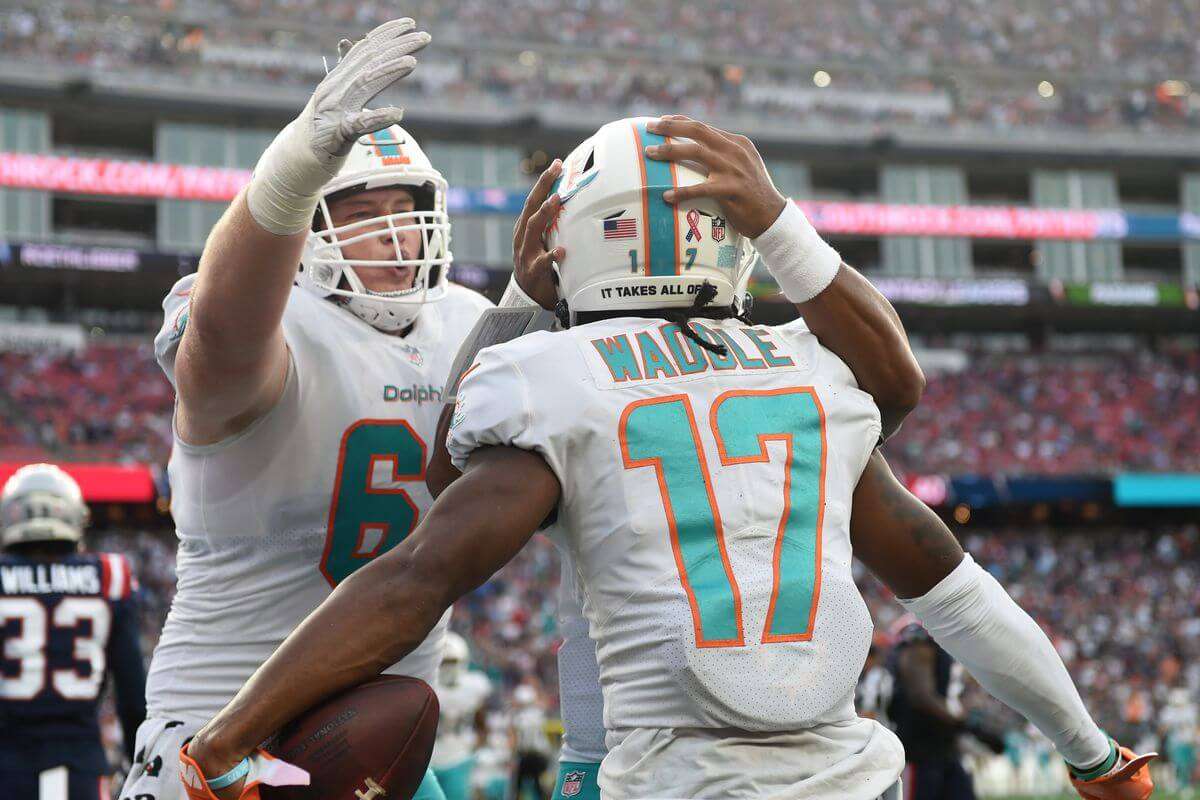 Kicking off another week of NFL action, a return to the UK, another DraftKings Showdown slate for 2021- Miami @Jacksonville. I’ll be there today taking in the action. It used to be that crazy things happened in the UK, but I think as teams have gotten used to coming over, it’s become more predictable. Injury is going to be a common theme for this week, with players returning and being unavailable.

Robinson has really taken back the heavy workload that he was given last season, touching the ball at least 19 times in his past three games. A matchup against Miami, who have struggled to stop the run, should give Robinson another opportunity to have a good fantasy performance.

We should be welcoming back Miami’s young QB, and college QB of Waddle, Tua Tagovailoa. I’m not confident enough in his return to put him in my captain spot yet, well unless I’m playing alot of lineups, but it should mean Waddle has a good performance. Waddle was one of Tua’s favourite targets, and Jacksonville’s secondary isn’t great.

You can also put Gaskin into your captain spot this week. Gaskin is coming off of his best performance of the season. If you aren’t sure if that is here to stay, his snap counts might give you a bit of comfort. In previous weeks the backfield was split, last week Gaskin had just under 70% of the snaps. This game could end up in clock control, meaning plenty of touches for Gaskin.

Tua is back (well expected to be). If he could choose the opposition to face, it’s likely that he would choose a team like Jacksonville that haven’t found an answer on defense. Tua has ability with his arm to get the likes of Jaylen Waddle into space, and has upside with his legs which could become useful in the redzone.

Lawrence hasn’t lived up to the hype of the draft yet. But, was he ever going to be able? Miami’s defense hasn’t been the unit it has been in previous seasons and allowed teams to dominate their secondary. That makes him worth some consideration on this single game slate, at least in a few lineups. Still not convinced? Over the last two weeks he has completed 70% of his passes for 239 yards for a TD, throw in his 32 yards on the ground and there’s something there.

Jones stepped up, unsurprisingly, as the team’s lead receiver with D.J. Chark on IR. The veteran had been making himself as the most important part of the offense before the injury. After starting out well, he has struggled over the past two weeks. But that is just going to help reduce his ownership from where it should be.

Gesicki is a bit of a gamble, given how Tua has used (or not used) him when he has been on the field. But, Gesicki is a great receiver, able to move out wide and find space or catch in the middle of the field. However, since the last time Tua took the field, Gesicki has become more important in the offense and Miami have lost some receivers to injury.

Arnold was traded to the Jaguars, not really making an immediate impact, but based on how he was used in Week 5 he has a role to play. He found himself being used as a big body receiver, rather than being used to block. He actually led the team in yards last week, as well as being up the top for targets and receptions on the team.

Williams is worth considering too, especially if you need a cheaper option. Williams had his best game of the season last time out, with three receptions for 60 yards. DeVante Parker has been ruled out of the game, and so Williams should see some more time on the field.

I’m not going to touch the Jags kicker or defense in this one. I just don’t know how it is going to split for Josh Lambo and Matthew Wright in terms of who gets the start, and the defense? Well, doesn’t seem like a good way to spend your budget. It’s not alot different on the Miami side either. If pushed, I’d prefer the Miami DST ($3,400). They have struggled this season, but last year they managed to make some plays, so there is a chance they could recapture that.

So, there are our DraftKings selections for the 2021 Showdown of Miami @Jacksonville! Remember any DFS questions, you can check out our articles here. Or you can find us on Twitter, Facebook, Instagram, or jump into our Discord server