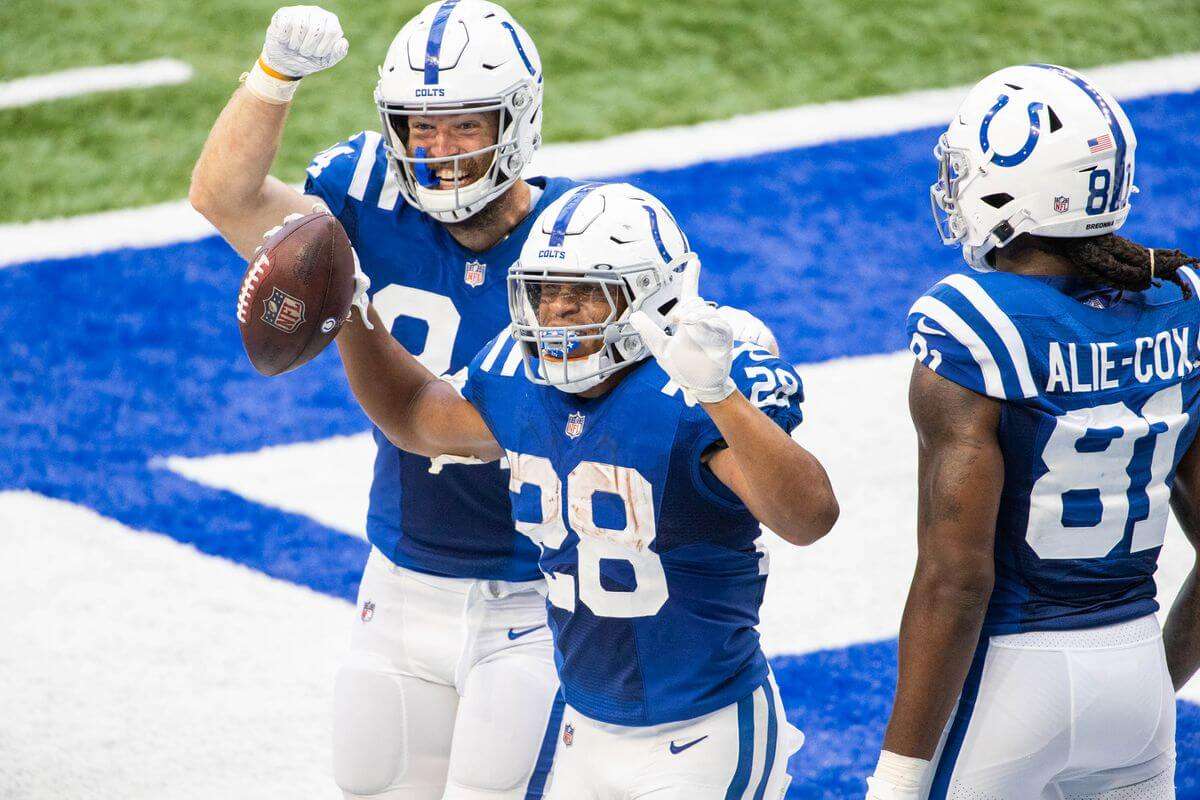 We are here to cover the DraftKings Showdown slates for the 2021 season, continuing with New York @Indianapolis. Tonight’s game suddenly looks a lot more appealing on paper than it did before Sunday’s Week 8 matchups. Future Hall of Famer Mike White threw for 405 yards in his first career NFL start, throwing for 3 TDs and 2 INTs in their huge upset of the Bengals. Rookie Michael Carter had a career day of his own, and Gang Green will be looking to make it back-to-back wins, as they travel to Indiana to face the Colts on TNF. Indianapolis come into this off the back of a disappointing OT loss to division rivals Tennessee but enter tonight’s matchup as 10.5-point home favourites, with the O/U sitting at a deflated 46.

No side has surrendered more fantasy points to opposing RBs this year than the Jets. Whilst they sit in the middle of pack in terms of rushing YPG (115.1), only Houston have given up more rushing TDs this year, with New York allowing 12 on the ground through 7 games. Similarly, only Seattle have surrendered more receiving yards to opposing RBs, with 78.9 yards per game coming through the air to RBs when facing this porous Jets defence. Taylor himself has really picked up after a slow start to the season. The production was always there, he was just struggling to find the end zone. He’s currently 2nd in rushing yards (649), T-3rd in rushing TDs (6), and 7th in YPC (5.4). He’s hit pay dirt in 5 straight games, as well as hitting the 100-yard mark in 3 of those. Whilst his usage in the pass game isn’t crazy high, his red zone usage certainly makes him a great captain. He has a team high 47% of red zone touches, as well as 28 rushing attempts inside the 20, which leads the entire league. The Colts should play this game from in front, providing Taylor with a positive game script. He should feast versus this disappointing Jets team.

Boy, has the 4th-round rookie out of North Carolina really found his feet in this offence with White under centre. Carter was the team’s leading rusher AND receiver in both of the last two weeks, and saw a crazy 14 targets in their win over Cincinnati. He snagged 9 of these for 95 yards, as well as having 15 carries for 77 yards and a TD on the ground. New York seems to slowly have shifted away from running a committee backfield, as Carter seems to have finally solidified his role as the primary back. Whilst this Colts team ranks 1st in DVOA run defence, Carter’s role in the passing game almost nullifies this obstacle. His price has rocketed, but he’s still a great option, as White has shown no hesitation in checking it down to Carter on a regular basis.

Keelan Cole should operate as the WR2 tonight with Corey Davis sitting. Cole looks to be severely under-priced, especially considering he boasted the 2nd highest snap share amongst WRs last week with Davis out. He had a TD grab overturned last week, but still saw 5 targets in the win. He also has an aDOT of 14.06 yards this year. Admittedly, with another QB under centre this may not hold much relevance, but last week his aDOT of 6.8 yards was the highest of any receiver with more than one target. With New York slated to be playing this from behind, it makes sense that White should have to throw a fair amount – giving Cole plenty of opportunities.

Wentz has been solid this season. Ignoring some of his usual stupid turnovers, he’s put up some nice numbers through 8 weeks, and looks to lead the potential resurgence to the top of the AFC South with Derrick Henry’s injury news over in Tennessee. Wentz has actually only thrown three picks so far, as well as 14 TDs. At just over 240 passing yards per game, Wentz has a nice floor on tonight’s slate, especially given that he’s thrown multiple TDs in each of the last 5 games. He looks to finally be finding his feet in this new offence, and seems to have forged a great connection with WR Michael Pittman Jr.

Speaking of the Colts wideout, Pittman is another player in a great spot tonight. With Campbell out for the season, and Hilton missing again, Pittman is the unquestionable alpha in this WR corps. When Hilton last sat in Week 7, Pittman accounted for 105 of Wentz’s 150 passing yards in San Francisco. This Jets secondary have been poor against the pass so far this year, surrendering 275.3 yards per game. They’re also struggling to force turnovers, with a league-low interception percentage of just 0.4%. Only Pascal has seen more red zone targets this year than Pittman.

Indianapolis is still surrendering a crazy 7.4% TD rate opposing QBs, the highest in the league. I imagine that White shouldn’t have quite as big a game as he did last week by any means, but he should still be able to put up decent numbers. Wentz would still rank higher for me, but at a bit of a discount, White is still a solid play. This Colts defence is still allowing 243.6 yards passing per game, near league average, and are 20th in pass DVOA. The volume should be there once again for White, although not quite at the level we saw last week.

The whole mid-range on this slate is horrible. Crowder is solid, but I’d rather get up to Carter. Pascal is okay, but it’s difficult to play him alongside the other high-priced players. Ty Johnson is $6400 for an RB2 unlikely to see anywhere near the volume he was seeing before Carter broke out. Elijah Moore is interesting – he has a decent amount of targets in recent weeks, but 3 WRs actually saw a higher snap count than him last week, and I think he’s probably due for some regression. Hines looks to have been replaced by Jonathan Taylor in the passing game, and Cox and Doyle are very TD-dependent at their prices. They’re decent GPP pivots, but I think they’re far too risky in cash games. Barring Keelan Cole and potentially Denzel Mims ($2,000) there really isn’t a whole lot I want to get to in this range.
Ashton Dulin ($200)

Dulin is my favourite value play tonight. The Colts wideout looks to be the clear WR3 tonight with Campbell out for the year and Hilton sitting this one out. Keke Coutee ($200) was elevated to the active roster 2 weeks ago, before reverting back to the practice squad following his 1 catch for 5 yards game in San Francisco – but only saw a 6% snap count compared to Dulin’s 63%. Even if Coutee is elevated once more tonight, Dulin would still be my preferred play, as he’s played in every game this year, so should have a solid grasp of this offence. He has back to back games with 4 targets, was effectively the WR3 in Week 7 with Hilton and Campbell out, and had a team-high aDOT of 24 yards last weeks. He’s priced at the bare minimum, and basically needs a catch to hit value. Rostering Dulin tonight really allows you to stack the high-priced studs at the top.

Badgley ($4,400) is the preferred kicker tonight, with the Colts having an implied total of 28 points, and looking like a solid kicker with Blankenship on IR. In terms of defences, I think only Indianapolis ($5,000) is worth considering from a raw points view, although at that price point they’re going to need a fair number of turnovers, and maybe even a TD to be worth it.

So, there are our DraftKings selections for the 2021 Showdown of New York @Indianapolis! Remember any DFS questions, you can check out our articles here. Or you can find us on Twitter, Facebook, or Instagram.