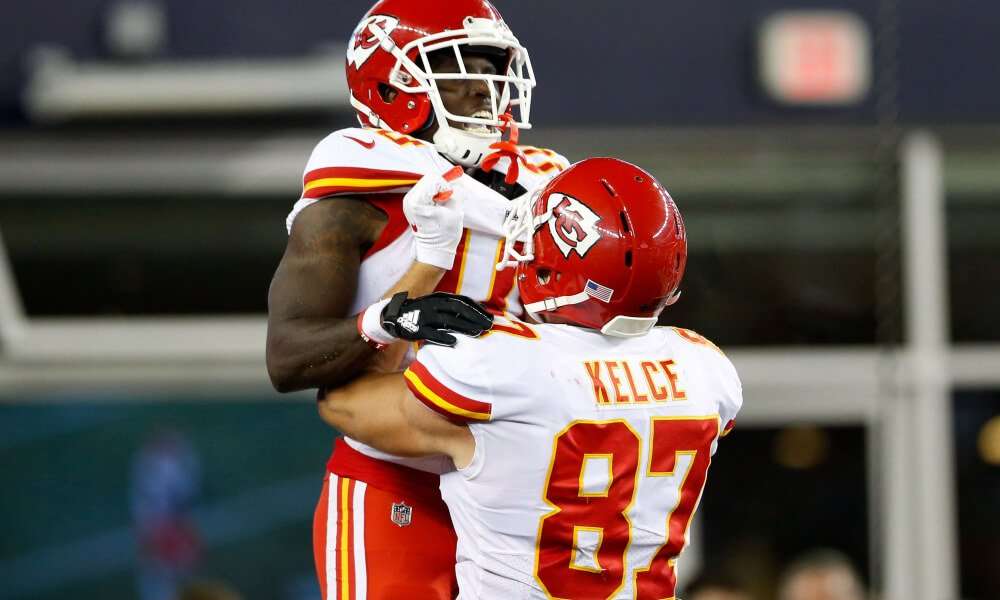 Welcome as you join us in our coverage of the 2021 NFL Playoff Draftkings Showdown slates, continuing with Pittsburgh @Kansas City. Vegas has the O/U set to 46.5 and Kansas City is expected to win by 12 points. The Steelers don’t have much of a chance in this one so I’m rostering a lot of Chief starters and backups. Really, with the struggles that the Steelers have had

The fastest man in the league will go up against the great defender Minkah Fitzpatrick. He also was sidelined last week due to a heel injury during warmups. I think with these two hurdles lingering over him people will be less inclined to roster him. He is Mahomes’ primary receiver and in such an important game I see Mahomes and Reid feeding Hill. I have a feeling the Chiefs are going to go up early and then sit Hill for the majority of the second half. I wouldn’t be alarmed by this as he will be the reason they blow out the Steelers. Due to his pivotal role and lower than normal ownership I like Hill as a captain pick.

Kelce has finished the regular season seven times now with over 1,000 receiving yards. Expect him to play a critical part in 3rd conversions. The Steelers have a decent defensive front and will be bringing it to Mahomes all day. Kelce, Mahomes safety value, will be targeted a lot and early. I see the Chiefs being aggressive in the air, setting the momentum in the game, and putting it out of reach by the first half. Also, I like Kelce because he has a strong possibility to snag one of the many touchdowns in this game. He’s expensive so be sure to find cheap punt plays that go along with your narrative for this game.

He has the arm strength, football IQ, and athletic ability to dice up any defense. Earlier this year the Chiefs had issues figuring out opponents’ coverages- causing overthrown routes and game shifting interceptions. Nowadays it seems Mahomes and crew have figured it out. The offense is back to its high octane pace, I like Mahomes in at flex and putting one of his pass-catchers in the captain spot. Also I Chiefs defense in the captain spot and then pair up Mahomes with as many pass-catchers as possible. The Chiefs won’t need to throw but should use this time to work out any kinks in their timing or routes.

No need for Kansas City to continuously throw the ball in this game, but they will anyway. As a result, I see some of that time be used to work out any kinks with Hardman’s option or timing routes. The Chiefs still have a long way before the Super Bowl and should use this time to practice for future matchups. I don’t like his price tag but his ownership could garner him some looks for large-field tournaments.

The Chiefs DST have a +4 turnover differential this season with 29 total takeaways. They allow a lot of yards but I’m not too concerned. The Steelers’ offense is terrible and the Chiefs always find a way to turnover the ball. For correlation, pair the defense with one of the Chiefs running backs.

Kansas City will almost certainly blow out Pittsburgh. I think Andy Reid will pull out his starters and allow his backups to continue the beat down. In Week 18, Mckinnon got 5 rushing attempts, was targeted 3 times, and caught all 3 passes (one for a touchdown). Reid wants to use him before free agency and garbage time will be perfect to show off his skills. Sure, it relies on the Chiefs getting up big, but that is surely the way this game goes!?

Juju has been out since Week 5 and this weekend activated off the injury reserve. He is priced at $200 and could potentially have a role in this game. Before Schuster went down he was known for his tough play style, chipping DBs in the run game and catching unpleasant throws in the middle field getting smothered by linebackers. His playstyle elevated him into a leader and we have a chance to see it today. If he does play, we have a chance to exceed value and have room for other studs. It literally would only take a few catches for him to hit value in this one.

So, there are our DraftKings selections for the 2021 Showdown of Pittsburgh @Kansas City! Remember any DFS questions, you can check out our articles here. Or you can find us on Twitter, Facebook, or Instagram.