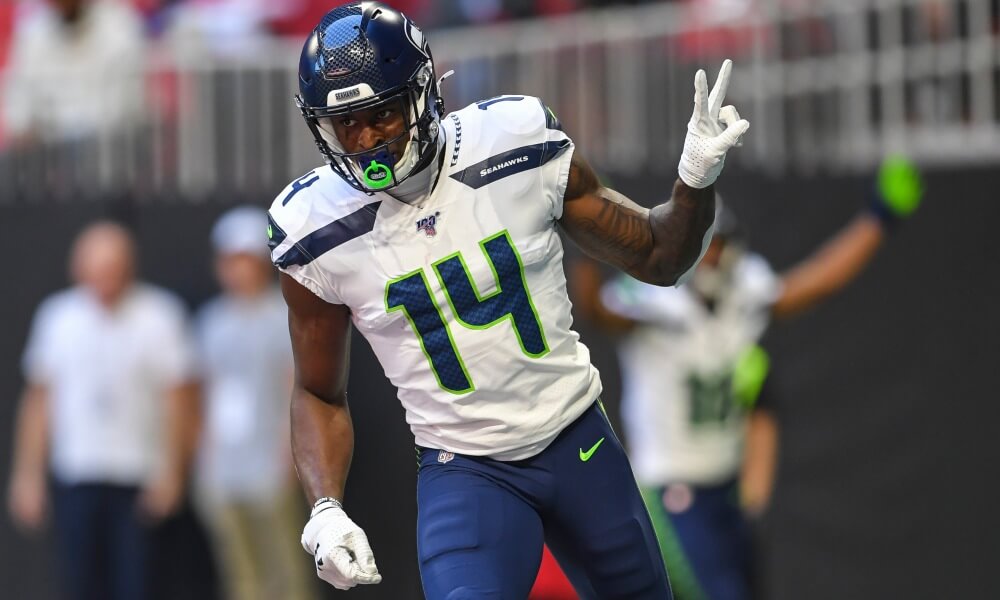 End your 2021 Week 12 with this DraftKings Showdown slate Seattle @Washington. As we head towards December, the playoff races in the AFC and NFC are hotting up. If Seattle win tonight, 8 of the 9 sides outside of the playoffs in the NFC will be just one game out of a wildcard spot. Russell Wilson hasn’t looked the same since his return from injury, as the Seahawks enter this one off the back of two losses. Washington on the other hand, enter this one following two straight wins, including a 29-19 victory over the reigning Super Bowl champions. Seattle are currently 1.5-point favourites, although that number has fluctuated over the weekend. The O/U is 47.

Despite two below-par games, tonight couldn’t be any better of a bounce-back sport for Russ. WFT rank dead-last in DKPTS per game allowed to opposing QBs, at 25.6 per game, 3.7 more than 2nd-worst. Only Indianapolis have given up more TDs through the air than Seattle’s 24, and their pass rush has taken a big hit with star edge rusher Chase Young landing on IR. Similarly, no team is allowing TDs through the air at a higher rate than Washington, who are currently giving up a 6.6% touchdown percentage. All signs point to Wilson having a great game tonight, and I expect him to atone for a couple of underwhelming performances.

Heinicke continues to put up solid numbers as WFT’s QB1, averaging 266.4 passing yards, and 27.6 rushing yards per game. Prior to last week however, he did have a 6-game streak with 1 or less passing TDs but seemed to bounce back in a 3 TD performance at Carolina. The Seahawks pass defense has been straight-up awful this year, and Heinicke should certainly be able to exploit it. They’re giving up a league-high 279.6 yards per game, are tied for the lowest number of interceptions with 4, and have managed the 3rd-least sacks with 17. This is a great matchup for the Washington Football Team, and Heinicke could post some big numbers tonight.

Washington rank 30th in pass DVOA, and with Metcalf coming in at $2,100 cheaper than Lockett in the captain spot, Metcalf is a solid option here, especially in GPPs. He commands a 26.33% target share – just 0.36% less than Lockett but has seen 11 red-zone targets to Lockett’s 3. Metcalf is an absolute monster and leads the team with 8 TDs, yet his salary seems somewhat deflated on this slate. It’s always a lottery between Metcalf and Lockett, but with DK being slightly cheaper, I’m happy to roll the dice and land on him this week.

Scary Terry is an absolute target hog in Washington, with a 27.6% target share on the year. As I just mentioned, this Seattle pass defense is disgustingly bad, and with the PPR scoring on DraftKings, McLaurin is a great pay-up option, especially with his 9.1 targets per game.

Gibson has seen 26 red zone carries this year (10th-most in the league), accounting for 36% of the team’s red zone touches (5th-most in the league). Tonight, he gets to face a Seahawks defense allowing 31.2 DKPTS per game to opposing RBs, the 2nd-highest in the NFL. With an implied team total of 22.75, WFT look likely to find the end zone on multiple occasions, and it’s likely their leading rusher plays a part in at least one.

We were told McKissic was going to take a backseat role in the offense this year, but that hasn’t been the case at all. McKissic actually has the second-highest target share on the team at 14.24%, averaging 4.8 per game. Whilst Gibson is certainly the lead rusher, McKissic’s role in the passing game is still solid. Tonight, he gets to face a Seahawks side that’s allowed a league-high 726 receiving yards to opposing RBs. I love McKissic in GPPs tonight, and a WFT RB double-stack certainly seems like a viable option with McKissic’s PPR upside.

Logan Thomas looks to be activated off IR before tonight’s game and is great value at such a low price. Given it’s his first game back from a long injury layoff, it’s unlikely he’ll see the usage he was seeing at the start of the season, but he should still get plenty of looks. He tied McLaurin with 3 red zone targets in the first 3 weeks, whilst also being on the pitch for 100% of offensive snaps through those 3 weeks.

Swain is comfortably the WR3 in this offense, albeit a considerable distance behind Lockett and Metcalf. However, I think this game could turn into a shootout tonight, especially with two awful secondaries. Swain is worth a flier in GPPs – he’s been on the field for 60%+ of offensive snaps in 7 out of 10 games this year, and has seen 4 red-zone targets, a number only beaten by Metcalf’s 11.

Despite the middling O/U on this one, neither defense really appeals. No team is worse in the NFL at creating turnovers than the Seahawks, and both sides have really struggled to limit scoring on them. With the kickers priced as they are too, I’m happy to look elsewhere.