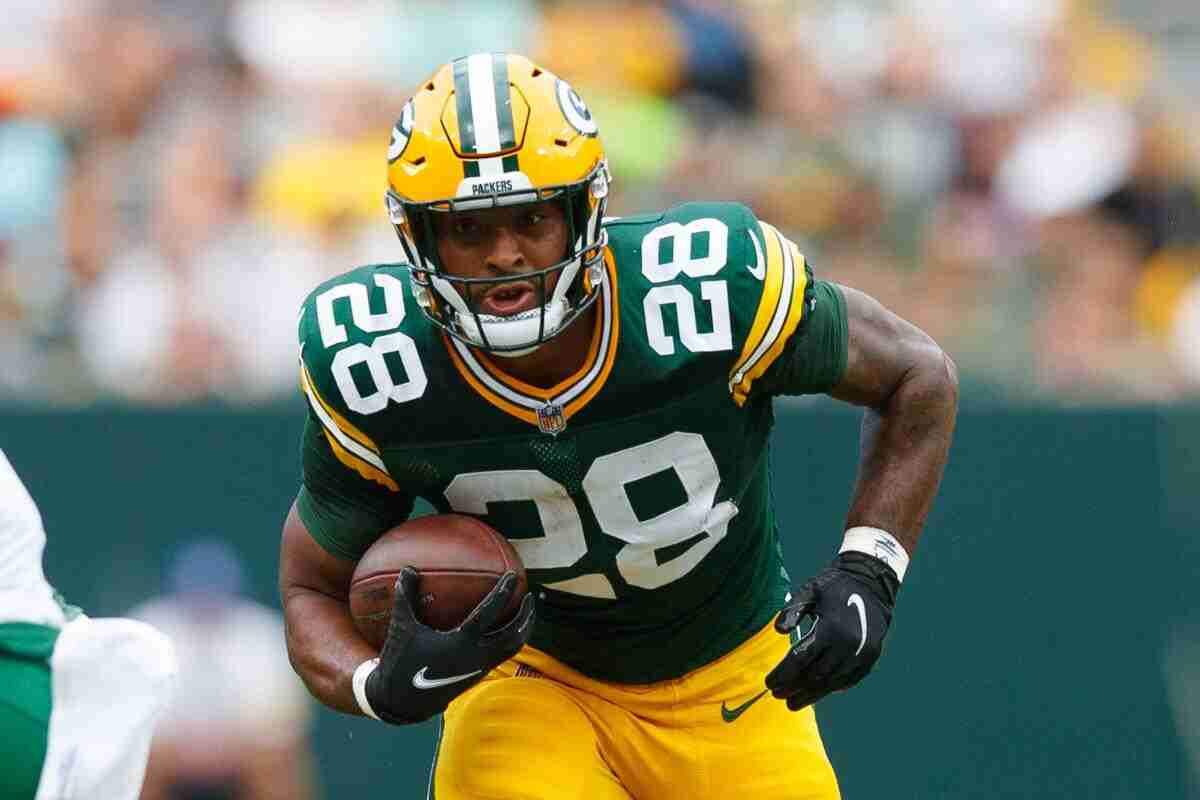 Continuing the international series of the 2022 season, New York @Green Bay, here we cover the DraftKings showdown slate. With the Packers finally coming over to the UK, that completes the set for teams that have travelled to London. I’ll be hoping for another good game after last week, but would quite like the Packers to stretch the lead rather than rely on a missed FG.

Lazard is a matchup nightmare for defenders. He has the ability to get free of defenders with his size and speed. He has been getting more and more involved in the offense since returning from injury, culminating in his 6 receptions for 116 yards against the Patriots last week. The Giants’ secondary is solid enough, but Lazard should be able to better them.

Dillon has been getting a good amount of volume each week. The issue is that he hasn’t managed to score since Week 1. That should change this week against this New York defense. He surely has to score in this contest, and at his price, he should hit value nicely.

If the Giants are going to do anything in this game, it’s likely it comes from Barkley doing it. Barkley is looking like he is somewhat back to his best, shouldering the workload out of the backfield. On the season he has run the ball 84 times already this season for 463 yards, scoring twice. With Daniel Jones banged up, we could see Barkley also get more dump-off receptions.

Rodgers has spoken about enjoying the trip over to the UK to play, and loves the spotlight. With how the Packers have played to start the season, they spread the ball around to their receivers. Adding Rodgers gives you all of the exposure through the air as the offense finds its better receiving options.

Jones has quite a hefty price tag considering that it’s been Dillon that has been getting the volume of the touches. The reason is of course that Jones has been scoring, where Dillon hasn’t. With the team using Jones as one of the leading receivers for the team help Jones on DK. At the price, I prefer him as a flex rather than a captain play.

Doubs is the new hot receiver for the Packers. Rodgers seems to have developed a decent rapport with the rookie quickly. The thing is, as he hits headlines defenders will be looking to limit him more and more. There isn’t much of a difference in cost between Doubs and Lazard. I prefer to spend up on Lazard instead of Doubs in GPPs, as he is going to be far less owned.

Tonyan has been getting more involved in the offense as he recovers from the injury that forced him to miss last season. He hasn’t been getting the same redzone looks as he used to, but that could change if Rodgers clicks with him again.

The Giants receiver room has been smashed by injury, so there is every chance that one of these two do something of note this week. Sills has been on the field a lot, but hasn’t managed to turn that into fantasy production. Slayton has the ability to convert big plays with his speed, making him a real hit-or-miss option. I’d go for Slayton of the two, at the cheaper tag.

Bellinger’s price is great, allowing you to pick up a cheap part of the offense that is going to get opportunities on the field with some level or reliability. Jones has shown a love of looking to his TEs when under pressure. If the Giants get down towards the goal-line he has could find himself scoring a short yardage TD.

Both defenses are worth considering in this one. Packers DST ($5,600) is a big price tag for a DST, and the reason is quite simple to see. The Giants don’t really have healthy receivers and even Daniel Jones has been carrying an ankle injury. With their offense not really getting much done when they are all available, they are going to be hunted by the Packers. Equally, Giants DST ($3,200) do have a decent pass rush, and the offensive line of the Packers (and indeed Rodgers) aren’t the same as they used to be. More of a GPP option, as I can’t see them being overly owned.

As with most slates, the kickers are worth considering at their price with the floor that they offer. Graham Gano ($3,800) is the cheaper of the two, and offers you a cheap part of the Giants offense incase you want to go Packers-heavy. Mason Crosby ($4,000) is likely to be lower owned in this one, with the expectation he will be getting more PATs than FGs.

Who will lead Giants-Packers in rushing yards in Week 5? – Powered By PickUp