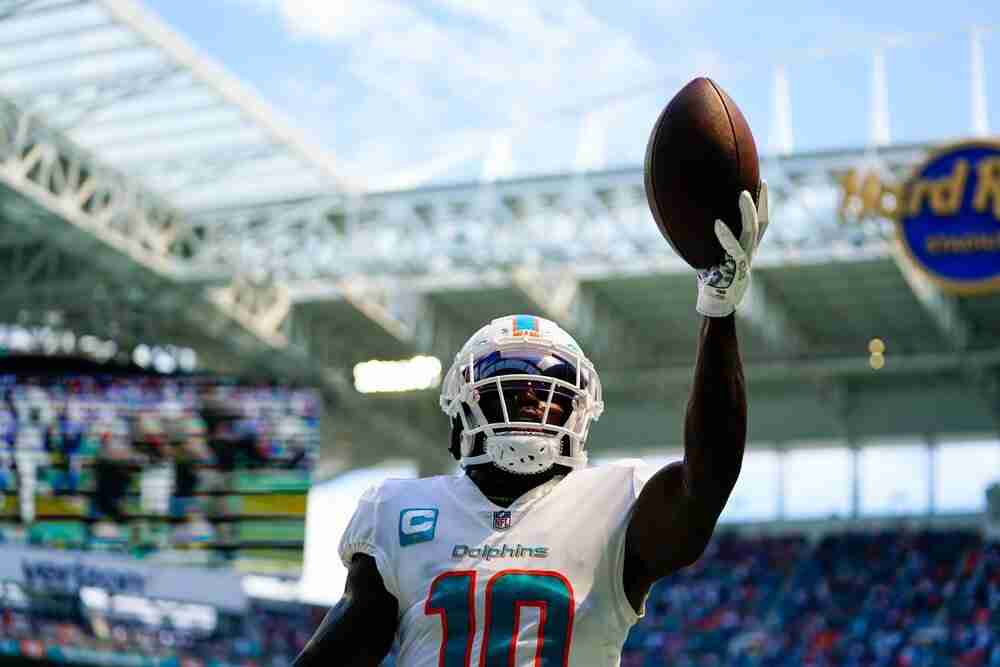 Finishing off another Sunday of the 2022 season- the DraftKings showdown, Miami @Los Angeles. This game feels like I want 6 guys in the CPT spot. Think it’s going to be a case of covering a few CPT/ flex options, and getting lucky. This feels like one of the better SNF games in recent weeks, or it might just be the fact that doing my research there felt like alot of options. This is looking like it could be a shootout, with a 55 O/U and Miami favored by a single FG.

Hill comes with a high price tag, but it’s worth it. This Dolphins offense has been perfect for him, with six 100+ yard games. Infact, he is averaging 115 yards per game. Against this Chargers secondary (that he torched when with the Chiefs) Hill is a high ceiling/ floor play on the slate.

Ekeler is going to be under-owned in the CPT spot, as people overreact to his struggles last week. But, Ekeler is the heartbeat of this offense, with double-digit opportunities on the ground and through the air. With DK’s PPR scoring, Ekeler is a nice play here.

Waddle has been the second option in this offense, which comes with risk, but think he performs well here. Waddle has been effective this season, with four 100+ yard games. With how the Dolphins air the ball out, he should get a target share to be effective here.

Allen was nearly a CPT selection for me, but I prefer Williams with the pricing. Williams looks like he is set to play after suffering with injury. With this pricing, you are able to get in a bunch of stud plays in your lineup and feel ok about it.

Herbert is primed to have a big game here I feel, but I’m not quite confident to put him in my CPT spot. He finally has all of his offensive-receiving weapons back. The issue with Herbert and the Chargers comes with the offensive line. But, Herbert hasn’t really had a solid line ever in his career, so I’d expect him to scramble and air it out downfield.

Tua is working well as the leader of this Miami offense. He has shown his arm talent plenty this season with the way he has made Tyreek Hill and Jaylen Waddle pop this season. Hasn’t hit the 300-yard mark as many times as I thought he had, as he has had plenty of near-misses with four games of 270 yards or more that didn’t hit the mark. In what should be a shootout here, I like Tua as a flex with Hill as CPT.

Allen is right on the edge of being considered a CPT for me, but think ultimately I prefer him as a flex. After struggling with injury and missing most of the season, he has stepped back into action and re-established his role as primary receiver with 14 targets last week. With Mike Williams back, he isn’t likely to get that many targets, but should have a nice floor with the PPR scoring.

Palmer has been great this season, working as a fill-in receiver when either Williams or Allen (or both) were missing. With both receivers back, he is going to be massively under-owned on the slate. With the chemistry that he developed with Herbert, he could smash value with a deep reception or two with Allen and Williams in the game. If either of the Chargers star receivers were to go down, he could win the showdown slate almost by himself.

The Dolphins backfield, made up of ex-49ers is very 49-er-esque. By that I mean it’s hard to know which back is going to get the usage, or who will be more productive. Wilson was previously the lead back, but took a back seat last week to Mostert. Mostert is (finally) fully healthy, and has performed well when he has been. I’m going to have a mix of both of these in lineups, with the Chargers struggling to defend anything on the ground. If pressed, I’d go for Mostert with the cheaper price tag and carrying share.

Everett needs a TD to hit value here most likely. Is involved in the Chargers offense, but with Allen and Williams in the offense there isn’t alot left for the veteran. You can’t discount him with the matchup, but I’m not scrambling to put him in lineups.

Another victim of the Chargers returning to health. It’s hard to really see a path to success here outside of an injury. Has big-play ability so could pop for a long TD, but you can’t really trust it and the pricetag puts me off.

Sherfield is the WR3 on the offense, but has good chemistry with Tua. His deep-threat ability combined with defenses having to already deal with Hill and Waddle make him an interesting play here. Outside of the kickers, there isn’t too many options worth considering that are cheaper on the slate.

There isn’t a huge amount between these two in terms of price, but really there isn’t much here to consider. With Hill/ Waddle and Sherfield as receivers, as well as the backfield duo the Dolphins has, there isn’t alot left to split between these two. Since Week 9, the two them have combined for 12 targets for six receptions, 59 yards and a single score.

Another showdown slate, and the kickers are both very much in play. It’s just hard to really find any options that are priced below them that you can really feel confident in. Cameron Dicker ($4,200) has been a great fill-in for Dustin Hopkins, only missing one kick for the Chargers (a FG attempt from over 50). Equally, Jason Sanders ($4,000) has been solid. Not been as accurate, with some long-range misses (which can be understood) but a short-range FG miss and some missed PATs are a little concerning. Of the two, I’d find the $200 to pay for Dicker, but both are fine.

The defenses on the slate feel like a reach, given the high O/U but crazy things can happen. Neither the Chargers DST ($3,600) or Dolphins DST ($3,400) have managed to really be consistent getting pressure on the QB, as well as forcing turnovers. With the strength of these offenses, I’m not going to have either of these in my lineups outside of a ‘anything could happen’ shot.