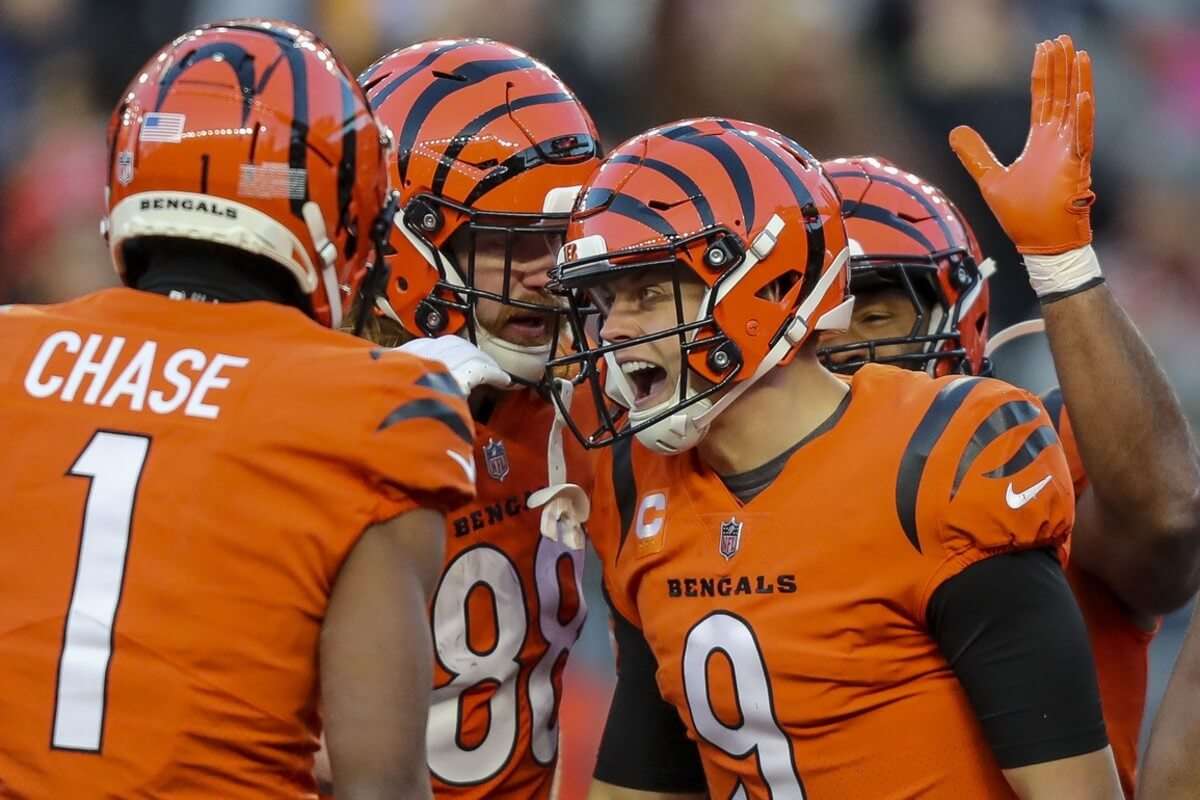 Continuing with Wildcard weekend for the 2022 season- the DraftKings showdown, Baltimore @Cincinnati. This one could get ugly quick. With Lamar Jackson ruled out for the Ravens during the week, we could see a QB timeshare!? The Bengals at home should be able to control this game on offense and defense, but of course, this is the playoffs and anything could happen. The Bengals are around a nine-point favorite with an O/U of 40.

Having Burrow in as your CPT removes the pressure of getting the right receiver that pops. This season though, Burrow hasn’t really had good fantasy performances with very similar performances in both 215-ish yards and a single score (in the early season matchup he snuck in for a TD). At the price, he is going to need to do better than that, but has a good chance with his team returning to health.

Chase is a massive part of the Bengals offense, and is likely a big part of the result of this game. Needs to have a big game to justify this price, particularly at the CPT spot, but has a massive opportunity to do it. Gets double-digit targets pretty much every time he is out there, and is productive with them. If the Bengals put up points it’s likely to come in part to Chase making a big-play for the team.

Higgins is going to have lower ownership after he should after only catching one pass of seven targets last week (against the Ravens). Has great upside though, as that was the first time since Week 12 that he hadn’t found the endzone. A nice pivot from Chase as a big part of the Bengals’ aerial attack.

Boyd is that cheap (not awful) CPT play that allows you to get alot of big pieces in your team and feel fine about it. Boyd is often overlooked in the offense, with the other receivers for the Bengals. But, Boyd still gets a decent number of targets. Caught 5 of 7 last week for 51 yards, which is pretty much his floor. If he gets one of those into the endzone, or blows up as he has this season, he is going to be a great CPT play.

Mixon is getting carries in the offense, and has been involved in the receiving game too. Averaged 15 carries and 5 targets in the regular season and is definitely in the frame to get a similar volume here. Production will be the question, after he was stuffed in the backfield with his carries last week against the Ravens. That question mark takes him out of CPT consideration for me.

There are reports that the Ravens might actually split the play here between these two, in which case you just can’t really have either of them in your lineups as a result.

For the Ravens to get a result here it isn’t going to come through the air. Instead, it’s going to come on the ground with Dobbins or Edwards. Keep the clock running, and the Bengals offense off the field. It’s only going to be able to happen though if the Ravens are able to limit the Burrow & co to start the game, otherwise they might need to abandon the ground game. Of the two it’s hard to give Edwards the nod, as he has been struggling for touches with Dobbins back, but if the Ravens do adopt the ground game fully, there should be enough volume for both of them (surely?)

With this ugly hybrid QB timeshare, we could see, it’s hard to really have confidence in any of the Ravens receivers. But if you are going to, it has to be the TE combo. Andrews disappeared for the majority of the season for fantasy but had a great game against the Steelers with 9 receptions and an even 100-yards through the air. Could perform here as a big-body receiver, but I’m not sure on his outlook with the price. Instead, if I was going to look for a Ravens receiver I’d go for Likely. Even with Andrews being the starter, Likely should still see a decent number of targets. But really, I’m not sure I really want to pin my hopes on either of them.

Perine has been a thorn in the side for Mixon owners all season. Not getting enough volume to feel like you can consider him, but getting scores in the redzone. Unless there is an injury to Mixon, the only way Perine sees any decent amount of volume is if the game is over and the Bengals rest their starters. That could happen, but unless you are going for a large volume of entries (or full contraction) you can’t put him in your lineup.

As I said with the TEs, it’s hard to really trust any of these Ravens receivers with the QB situation. The road to success for the Ravens is likely to come on the ground, but you can’t fully discount them. Instead of having that same intro three times, I’d thought I’d combine it here.

Robinson is the ‘WR1’ and had 9 targets last week, but only caught two passes. Infact, when you look back, he has only caught 10 passes in his last four games. The price really needs him to get in the endzone, as he has only topped 50 yards three times this season.

The fact that Watkins is the WR2 in a playoff game really tells you how injury has bitten the Ravens receivers. But, he can catch deep passes and get totals as a result. The QB situation for the Ravens is ugly, and Watkins only has five targets for the team. But, if the Ravens are forced to throw, Watkins could see some work and have a decent game here.

Ultimately, when it comes to needing a player to perform with question marks around them, I want to pay down to increase my floor elsewhere. So, if I am going to field a Ravens receiver, I’ll punt to Proche at the $200 minimum. Is likely the WR3 here, but could be given a larger role here. The pricing means he has to do next to nothing to hit value for you, and he is going to be on the field around half of the time.

Hurst has sprung up at times this season as a possession TE, getting checkdowns from Burrow. Likely going to have his season average 5 targets in this one. Really needs to fall into the endzone if he is going to hit value as a result, as he has only had 5 games with more than 40 yards through the air.

The Bengals DST ($5,200) are massively in-play here with how they performed last week against the Ravens- forcing four turnovers and getting four sacks too (one turnover returned for a TD). I don’t see that repeating, but this Ravens offense could REALLY struggle here. You could consider the Ravens DST ($3,400) but it’s a hurting unit. Still this is the playoffs and they could force some mistakes with the players they have. Not looking to have too many lineups with them in though.

Both kickers are in-play for me here. Justin Tucker ($4,200) has a huge leg and is accurate. If the Ravens stall on offense, they are going to look to Tucker to keep them in the game. I don’t mind having him as my only Ravens player in my builds either, as he could potentially be their highest-scoring player. Evan McPherson ($4,000) is also worth considering for your lineup, with the way the Bengals are going to (likely) be able to play. Could end up seeing only PATs, but the Ravens are likely to cause a few stops and McPherson has a good leg. I have some lineups with both kickers, allowing me to get alot of top-tier pieces.