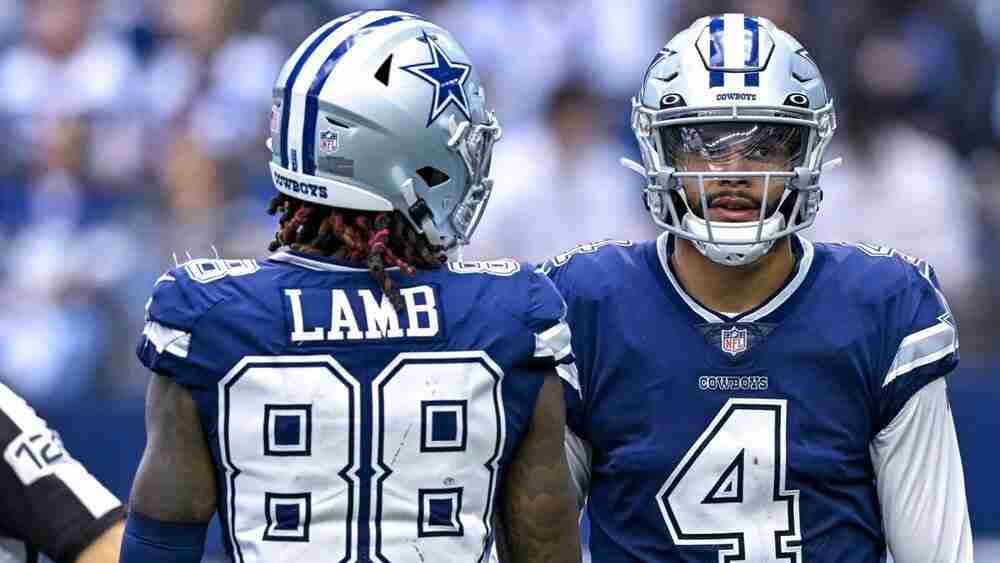 We are here to cover the 2022 DraftKings showdown slate for Thursday Night Football Week 17, Dallas @Tennessee. This is a weird slate, and we have a new writer and new format to dig into- but the same great (and profitable) analysis. The 11-4 Cowboys travel to Nashville to take on the 7-8 Titans this evening. Playoff picture motivation is key to understanding this slate, so let’s start there:

With Tennessee resting so many starters, the possibility of a blowout and shortened run for the Dallas pieces is very real. That is reflected in the spread, which opened at -10 in favor of Dallas but has climbed to -13.5 as of Thursday afternoon. Game script is always an important consideration in Showdown slates, and that is particularly the case this evening. I’m looking at two scenarios when constructing my tournament lineups.

Onto the players themselves. Typically here I would discuss trends such as snap counts, targets and red zone opportunities to try and find value and places for positive regression. Unfortunately tonight a lot of that goes out the window with both the resting of starters on the Titans side and blowout risk on the Cowboys side. As such I am only going to discuss things as if I’m playing tournaments (GPPs), since frankly, I have no idea what the field will do in cash. Nonetheless, let’s get into it.

Titans 3rd string QB Josh Dobbs ($6k) will get the start tonight. The former 4th round pick out of Tennessee comes in with 17 career pass attempts, so we really don’t have much to go off of. Suffice to say he is still probably a better passer than rookie QB Malik Willis, without as much rushing upside. Any time you can get a starting QB for $6k you should absolutely jump on it, so he’s definitely in play for me tonight. The upside is limited, so he’s only in play as a FLEX for me. And the game could also be a disaster for this offense with multiple turnovers, so don’t go overboard

RB Hassan Haskins ($3k) is priced as if Henry were in line to play, so he’s an absolutely smash value. He should see the bulk of the work on the ground, and has the ability to catch the ball out of the backfield with 4 receptions in his past 2 weeks. That number should only increase tonight with a more traditional QB in Dobbs. With so few spend-up options on the slate I don’t think we need to CPT him, but he’s an option there if you think the Titans keep it close. 3rd string RB Julius Chestnut ($1.4k) is also in play here at this price and with so much work to go around on a run-first offense, though I certainly prefer Haskins. The undrafted rookie hasn’t done much, but I think is likely to see more work in gamescripts where the Titans are playing from behind, as he profiles as more of a traditional catch-passing RB than the bruiser in Haskins.

WRs Treylon Burks ($5.4k), Robert Woods ($5k), Nick Westbrook-Ikhine ($4.6k) and TE Chig Okonkwo ($4.8k) probably get a bit of a boost with a traditional QB in Dobbs who can’t possibly be a worse passer than the raw run-first prospect in Willis. Any time we have a new QB it’s impossible to say where targets will go, so there’s opportunity to be contrarian here.

All of these guys were a disaster with Willis at the helm last week, with Woods leading the team in receiving with 4 receptions for 30 yards. The veteran possession man is probably my least favorite of the bunch in tournaments as he has basically no big-play upside. Burks is my favorite of the bunch, simply because he is the most talented and rookie WRs tend to ramp up as the season progresses. He’s the most likely to break a big play on a night where the offense could struggle mightily. Okonkwo also has big play ability with a mini-breakout with Tannehill  at the helm averaging with 5+ targets in 4 straight games. For just a minor discount from Burks, however, I won’t have much exposure, especially since Dallas is stout against TEs (4th in the league) and comparatively weak to WRs (28th). Westbrook-Ikhine could be a low-owned dart throw, and my only interest stemming from the “pre-season game mentality” as the 3rd stringer is the most likely to stay on the field if Vrabel benches even more starters. Finally, TE Austin Hooper ($3.6k) sees 4-5 targets per game, but outside of a week 11 blowup game hasn’t found the endzone this season. Similar to Woods, he doesn’t have enough big play ability to warrant consideration for me with better options in his price range to boot.

QB Dak Prescott ($10.6k) is in a smash spot on paper against a pass-funnel Titans defense. He’s a staple at the FLEX position for me (I don’t like to CPT QBs outside of rushing guys like Lamar and Hurts). Two things to keep in mind. First, defensive statistics are a bit misleading with the Titans benching so many starters, so Dallas may find more success running the ball than previous opponents. Second, there’s massive blowout risk here, so if Dak doesn’t do his damage early, he could be wearing a cap and laughing at your fantasy lineup from the bench come the 3rd quarter.

RB Zeke Elliot ($8.8k) is in a dream spot with no Tony Pollard and a gamescript where they should be ahead. I’ll own him pretty much everywhere, because he’s also the one most likely to fall into the endzone according to Vegas even if they do jump out to an early lead. He’s a terrific CPT play as well in any gamescript. Be wary that he could cede work to RB Malik Davis ($200) in a blowout, who himself  is a phenomenal value-play as he will serve both as a backup to Zeke sans Pollard, and the most likely to run out the clock in a blowout.

WR Ceedee Lamb ($11.4k) has been on a tear since the Week 9 bye, topping 20 DK points in 5 out of 7 games. There’s nothing not to love here, except the blowout risk which you can copy-paste from Dak. With so much value on the slate price is no object, so he’s my favorite CPT play in gamescripts where we think the Titans can keep it close-ish and Dallas still throws the ball. WRs Michael Gallup ($7k) and Noah Brown ($5.4k) have taken turns operating as the Cowboys 2nd WR option in the offense. Gallup is my preferred option here as he’s seen more targets in 6 of the past 7 weeks, and finally seems to be hitting his stride after missing the early part of the year with injury.

TE Dalton Schultz ($6.6k) is also very much in play here against a defense that bleeds points to the TE position. I don’t have much of a lean between him and Gallup, but will likely only play one or the other considering it’s unlikely we see a shootout tonight. TEs Jake Ferguson ($2.4k) and Peyton Hendershot ($600) are TD-dependent darts that I don’t think we need to get to with too many options with safer volume sub-3k.

The Dallas D/ST ($5.8K) is in a great spot today against a bunch of back-ups, and are a virtual lock for me in any Dallas onslaught (5 Cowboys, 1 Titan) lineups. I would fade however if we think the Titans keep it close by running the ball. The Titans ($3.2k) are in a terrible spot here as 13.5 point underdogs, so I won’t go there. If you’re playing a bunch of lineups you can always hope for a pick-6, but it’s about as bad as it gets for a defense tonight.

Dallas K Brett Maher ($4k) is in a great spot here, and I especially like him in gamescripts where we think Dallas stalls in the red zone and the Titans can keep it reasonably close as a result. Titans K Randy Bullock ($4k) is practically out of play for me as the Titans may not settle for FGs if they fall behind by 2 scores. Any time you have a low over-under the kickers are always in play though, so I suppose you could do worse.

So, there are our DraftKings selections for the 2022 Showdown of Dallas @Tennessee! Remember any DFS questions, you can check out our articles here. Or you can find us on Twitter, Facebook, or Instagram.